Tadayoshi Komiya, locally known as the "blue master" for his ability to always win when blue decks are dominant in an environment, was paired against popular Japanese Tournament Organizer Jin Okamoto who is entered in the DCI database as "Djinn" and is also playing an Oath deck. The Oath mirror match is always full of excitement (!) as each player plays land after land waiting for the other one to begin casting serious spells and when they do, the counterspells fly fast and furious! 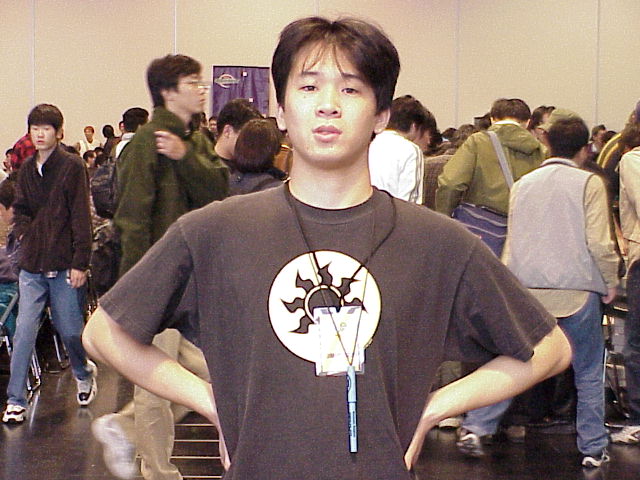 Okamoto mulliganed to six cards including Crater Hellion and Spike Feeder. Oath players never want to actually draw any of the creatures in their deck, so Okamoto would essentially have been starting with four cards if he kept this hand. He wisely decided to mulligan a second time.

Komiya opened with Enlightened Tutor for a Sylvan Library that he cast turn two. Okamoto attempted to play a Sylvan of his own but Komiya denied him with Force of Will. Over the next two turns, Komiya drew three extra cards at the cost of 12 life for a total of five cards advantage including Okamoto's two mulligans. Sylvan Library truly is the green Necropotence!

Between drawing extra cards and using a Gaea's Blessing, Komiya was able to Wasteland four of Okamoto's lands. Okamoto Enlightened Tutored but could find nothing more useful than a Seal of Cleansing that was Annuled. Trusting in his card and mana advantage, Komiya cast Morphling (illustrated by rk post who is here at GP Kyoto) and Okamoto answered with an Oath of Druids. After taking five damage from the attacking Morphling, the Druids sent a Morphling to Okamoto's aid. Between his Morphling and his Treetop Village, Okamoto could actually hold off Komiya's Morphling and Treetop Village, but he makes a Vienneau-esque error and casts a second Oath of Druids leaving him without enough mana to activate the Village and give the Morphling flying so it can block. Okamoto realizes his error and concedes. 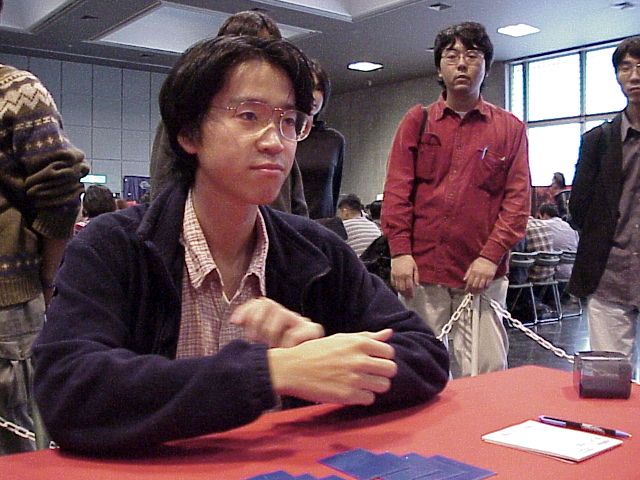 At the last second, Okamoto changed his sideboarding strategy and took out all four of his Enlightened Tutors to put back in the Annuls. Komiya mulligans but it doesn't interfere with his early land drops. After a couple of turns playing lands, Komiya tutored for a Phyrexian Furnace and attempted to play it after using Wastelands to remove both of Okamoto's Volcanic Islands. Okamoto still had a single blue source available however and Annulled the Furnace but the Annul was Pyroblasted. The Furnace was only around a turn before it was sacrificed to remove a Gaea's Blessing from Okamoto's graveyard.

Okamoto had two Treetop Villlages in play and began attacking with one but it joined millions of Ernham Djinns when it became the target of Swords to Plowshares. But he drew into another one and managed to take the game after several turns of land beatdown.

The worst fear of any Oath deck is to have to go to three games, especially against another Oath deck, as time starts becoming a deciding factor. Both players hoped that they can get a quick start so they can finish the game rapidly.

Okamoto attempted to get a Sylvan of his own on the table and even more counterspells made an appearance. An Annul was attempted but he had the Pyroblast to protect the Library and Okamoto was the first to have a non-land permanent in play. But after so many counterspells had been cast, Komiya figured it was a good time to try and play Morphling and he was right.

Morphling is normally regarded as a better permanent than Sylvan Library but after paying eight life to draw two extra cards, Okamoto dropped a Morphling of his own. The two Morphlings held each other off for many turns as each player rebuilt his store of counter magic. Komiya eventually tutored for Abundance and attempted to play it, triggering another counter battle that he doesn't win, though he did empty Okamoto's hand when Okamoto removed Forbid from the game to cast Force of Will. But Okamoto just drew Abundance off the top and slapped it down to give him an Ancestral Recall effect every turn when combined with the Library. 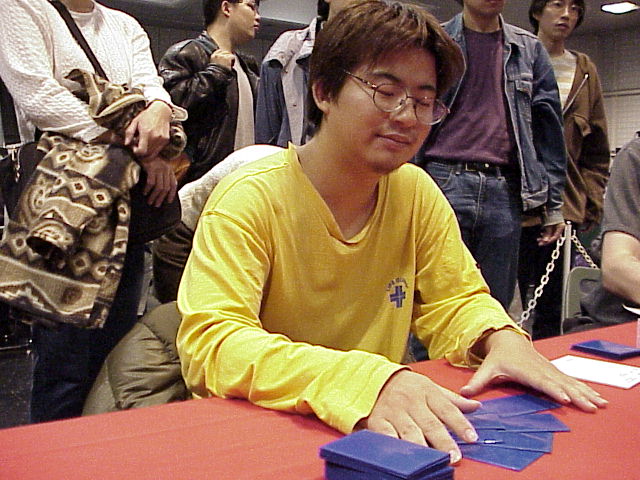 Drawing three cards a turn normally gives a player the victory but Okamoto was low on life and time was called so he has very few turns to win. It turns out that not only was he running out of time to win, he was also running out of time to not lose as Komiya drew a Spike Weaver that would do the final three points of damage. Okamoto *had* to draw a Swords to Plowshares or some sort of blocker. Naming "non-lands," he drew three cards with his Sylvan but only got a Gaea's Blessing. He used the Blessing to put two Brainstorms and a Swords to Plowshares back into the library and named non-lands again as he drew...another Blessing!

Okamoto cast the second Blessing and named non-lands again and drew...a Brainstorm! Everyone was laughing along as Komiya is visibly begging for him to not draw a Swords to Plowshares or another card drawer. Naming non-lands, Okamoto began revealing cards for the Brainstorm. He draws Aura Fracture, Tranquil Grove and Swords to Plowshares! Visibly relieved, Okamoto draws with Komiya.