Round 7 Feature Match - Team Just For Men vs. Team Paradox 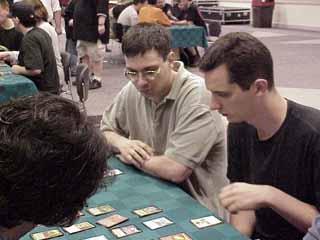 This interesting pairing put a pair of Canadians (Krakower and Vienneau) with Dave Price (Team Paradox) against long time friend Chris Pikula, Ben Murray and poker great Alex Balandin (Just for Men). The seats were Gary K in A, Matt V in B, Dave P in C and Alex in A, Ben in B and Chris in C. So Price and Pikula would have to play each other!

With this format, like Urza Block, colors are generally determined by seating. For example you want the drafters to the left of your team to capitalize on the powerful White Rebels from Masques and bombs like Troubled Healer. Likewise Green and Blue are also better in packs 1 and 3 so having a green or blue drafter at the left of the team is better. Red and Black drafters are better off to the right to collect Nemesis common removal and creatures. 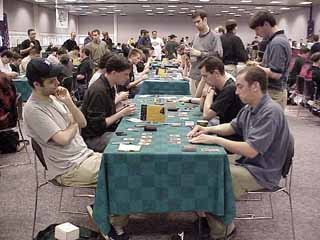 But this draft was about personal style and players drafting signature decks from the early picks. Paradox won the toss and opened first and Vienneau snagged the bomb Volcanic Winds. Price took the Bouncer, leaving Just for Men with Molting Harpy, Shock Troops and Ramosian Sergeant. This left Krawkower with two powerful Red cards, Lightning Hounds and Gerrard's Irregulars. He took them both which would mean he would have to share the Red with Vienneau. The first pack showed Pikula's plan for taking White, with the Sergeant over two powerful Red cards. It seemed like he could have taken the Red to try to filter Vienneau, but he was White from the start. And Price's Bouncer would be the only Blue card he drafted as he went back to his favorite archetype Black/Green. 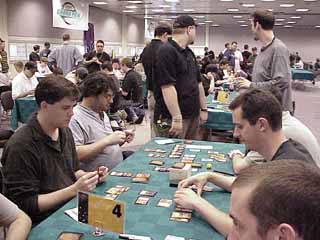 2nd pack, Price opens and takes Vendetta, while Alex takes Persuader behind him. This means he can cut off the black in pack two, but drafting the same color behind another player is usually undesirable. Pikula gets the Nightwing Gilder 4th solidifying on White, and leaving two cards for Matt and Gary - Outrigger and Rally. They give the Rally to Matt to give him spacing from Chris. 3rd pack gives Alex an Enforcer and Ben a 2nd pick Vendetta. This allows Price to cut off Black from two players instead of just Alex. I think Pikula's desire to go White/Blue no matter what hurt them as he could have gone Red or Black to put the hurt on Paradox. With the 4th pack, Murray was to solidify on Red/Black and took Kris Mage. Pikula takes his first blue card a Counterspell over solid creatures. Again it seemed that Chris wanted White/Blue instead of the best deck or the deck to weaken the opponent's. 5th pick, Chris took a Steadfast Guard over Kris Mage and Price got a late Spidersilk to go with his 4th pack Silverglade. Price was happy with Green/Black. 6th pack Gary opened a Barried, solidifying on Red/Blue, Vienneau took a Cho Blessing to solidify on White/Red. Alex stayed on Black even though Price was feeding him, but had enough that it looked like he might go mono-black.

In Nemesis craziness started - Just for Men got two Rathi Assassins, both to Alex and reaped rewards with Red and Black on the return. Gary got a late Zeppelin, but the real bomb pack was opened by Price, giving him Seal of Doom, Matt Ancient Hydra and Gary Predator Flag Ship! Pikula's weak White/Blue deck looked up with multiple Seal of Removal, Ensnare and more Rebels.

Just for Men's strategy was to draft creatures highly and try to cut the creature count of the opponents down. Going into the last pack Price and Matt were hurting for creatures and made it a point to let each other know that they would drafting creatures highly. The 3rd pack was all about the players filling the decks with solid creatures, like Trenching Steeds, Troubled Healers, Thresher Beasts and Diving Griffins. This would give Paradox the extra creatures needed to finish off their decks and thwart Just for Men's horde creature strategy.

I think Pikula doesn't have the knowledge of Prophecy that most Pros have, as he made and instructed players to make some questionable picks, like Stormwatch Eagle over Ribbon Snake and Spiketail Hatchling over Mageta's Boon. He also didn't defensive draft Rebel Informer which along with Plague Witch should give Pikula's White/Blue deck fits. Still I think Pikula has a shot with lots of Bounce and flyers. It comes down to Spidersilk Armor - if Price draws it he should win. Otherwise Chris will be able to race.

In the other two matches Paradox has the edge with Flagship, Volcanic Winds, Ancient Hydra, and Rupture against two beatdown decks. If I had to pick I'd say Paradox should win 2-1. But if Alex can get the mono-black Merc beatdown going and Pikula can pull off the impossible dream they could pull it out. 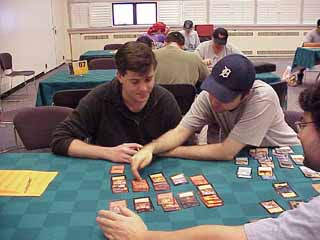 Fast forward to the match and the hyped Pikula-Price proved not to be the epic everyone had hoped for. Chris opened with Seal of Removal, but then Dave got to play his Rushwood Legate for free, following it up with Belbe's Percher. Chris played the most interesting Nemesis card, Wandering Eye and they could see how the game would turn out. Chris had a hand full of 3 and 4 casting cost Rebels while Dave had a Mercenary Informer that Chris had no answers for except to temporarily bounce it. Dave thought hard and decided to Vendetta the Eye to free up his attackers. Chris didn't Seal of Removal the Eye as he wanted to save it for Dave's Treetop Bracers. And he Sealed the Bracered Legate that Dave gleefully recast for free. This left Dave with a Mercenary Informer and Chris with a handful of Rebels. Chris tried to dump his hand but Dave had enough mana to bounce them all. He top decked a Seal of Doom for overkill and put a quick end to game 1.

Game 2 looked to be lopsided for Chris as he played Defiant Vanguard, Pious Warrior and Trenching Steed while Dave was stuck at 2 land and could only play Groundskeeper, Plague Witch and a Treetop Bracers on the Groundskeeper. The race was on and when Dave got his 3rd land he played Rib Cage Spider and stalled Chris out. Then Chris made what I felt to be a play error - he Sealed the Spider and continued to let the Groundskeeper nibble away at him. Dave played out the Spider and slowed Chris down. While at 6, Chris decided to take the Groundskeeper to go to 4, but Dave showed the tapped out Pikula a Wild Might for the win. Chris's hand was Defender En Vec and Withdraw so had he blocked with his Nightwing he likely would have won the race.

Chris made an error in deck construction that may have affected the match. He played Stronghold Biologist over Ensnare, a move that most Pros disagreed with. Still his draws were not optimal, but he could have played and built his deck better.

So it was down to upstarts Alex and Ben to make up for Pikula's blunders. Alex crushed Gary game 1 with Rathi Assassin. He showed the pure power of the card by playing it, stopping all the ground attacks and then searching out a half dozen Mercenaries. Gary never drew a direct answer to it, even though he had many like Seal of Fire, Rupture, and the Flagship. Game 2, Gary roared back with a Trickster Mage, Ribbon Sake and Stinging Barrier. Alex just played a Brute and searched a Bully to kill the snake. Alex drew the Assassin but forgot that the Trickster Mage could untap the Barrier and Gary used the combo to kill it. It didn't matter as Alex never drew direct removal for either creature the whole game. Gary's Lacolith Warrior was met with a Wall of Vapors and it looked like Alex had stabilized an impossible situation. But Gary drew Blaster Mage and went to town. But Alex Greel's Caressed the Warrior slowing the assault. Still the Barrier pecked away. With Alex at 3 Gary Ruptured the 0/3 Warrior, thinking the Muzzle rule applied. It didn't as the power was 0 when the Warrior hit the graveyard. Still Gary pinged Alex for the win and evened the match at 1-1. 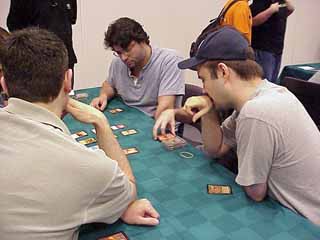 Vienneau and Murray would also split the first two games. Game 1 was all Ben early with beats and removal. Vendetta, Shock Troops and Seal of Fire cleared the way for his Grifters and Percher. But Matt came back with Ancient Hydra, Troubled Healer and damage prevention to stabilize he board and eventually gain control. Murray's deck, containing multiple Land Destruction spells to prevent Matt from abusing Volcanic Winds and Troubled Healer, had to win fast t have a shot and once Matt got to late game it was over.

Game 2 Ben's plan worked, as he despoiled Matt's only plains. With 2 Diving Griffins in hand he could only watch as the beatdown came fast and hard.

So it would come down to two game 3's to decide the match. Paradox needed to win one while Just for Men needed them both. Alex started game 3 slow but his turn 5 Coffin Puppets looked good against Gary's slow draw. Gary dropped Spiketail Drake as a 3/3 flying attacker and to stop an early Assassin if need by. Alex played Rathi Intimidator and Plague Witch, while Gary Rhystic Lightninged the Intimidator and untapped to play a Flagship. All Alex could draw was land as Gary drew bomb after bomb, including Lesser Gargadon.

Even though Matt's match was moot it was still hard fought. It looked like Ben would crush him with the Scoria Cat/War Cadence combo, but Matt just out-landed Ben and had several big bodies back to block. Finally Ben had to be content to trade the Cat for a Vanguard and slowly Matt took control. He played Ancient Hydra with a Sivvi's Ruse backup which made Ben blow his last two removal to kill it. This opened it up for a Cho Blessing on the Trenching Steed that would just go all the way.

There are several factors that determine which team wins in Team Rochester. Obviously opening bombs like Flagship, Winds and Hydra can help. But Paradox drafted well setting up the colors properly and Just for Men could not audible to stop them.