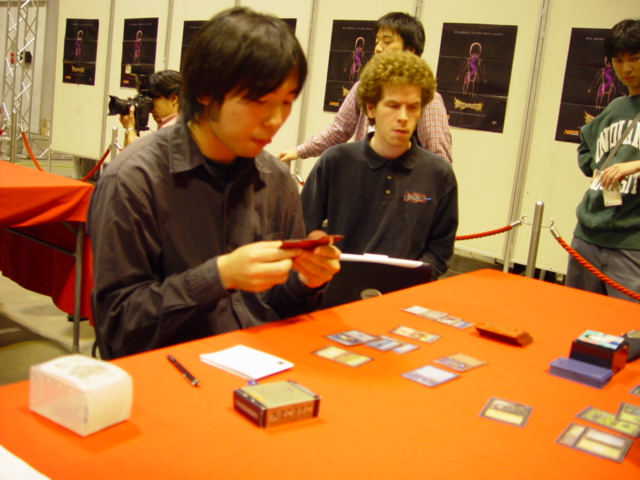 Shuuhei Nakamura is one of those players whose motions exude confidence. Between games he is calm, almost passive, but as soon as the game starts he is all deliberate action. Sometimes this comes across as recklessness, but in the pauses between plays, you can see him planning far ahead. He's earned a fair bit of success on the teams and singles circuits. Tomohiro Maruyama, his opponent, is somewhat less well-known, but posesses the skills that have brought him to 6-1.

Things started with an ogre trade: Spitting Gourna for Dawning Purist. Nakamura's Sparksmith was the only action on the table. Maruyama made a Nantuko Husk, but missed his fourth land drop. Meanwhile Nakamura had found his third land type and started the beats with Gustcloak Skirmisher. Maruyama made Wirewood Savage and swung with the Husk. Nakamura traded his Skirmisher for the Savage.

Now Nakamura ratcheted up the pain. Mistform Shrieker got ready to go overtop. Maruyama had nothing to do but cycle a Swat. The Shrieker turned into a Goblin to help Sparksmith smash the Husk. Vitality Charm made the big save, but it was a minor victory. The road to defeat was very short for Murayama. The Sparksmith eradicated his remaining forces and there was little he could do but die. 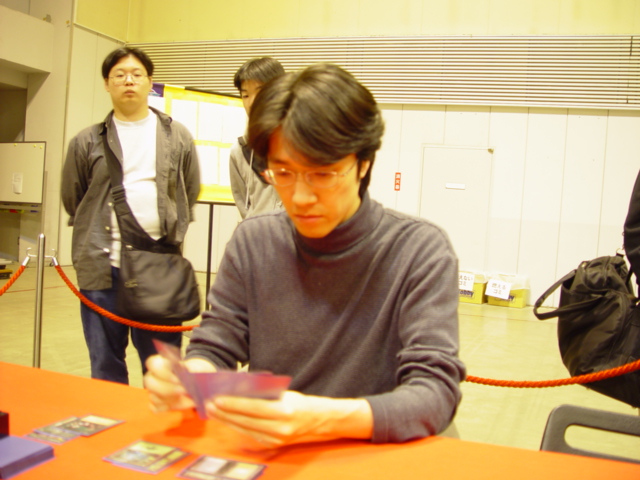 Maruyama's Wirewood Elf accelerated him into turn-three Daru Cavalier, and it even got him a second one. Nakamura made a 2/2 surprise and passed it back. Maruyama swung for two and made Leery Fogbeast. Nakamura made no play, fronting the fact that his monster was a Lancer. Maruyama believed him, and a good thing too, since he uncovered it at end of turn.

They both made more mysteries, and then Murayama attacked. Nakamura double-blocked, trading his Lancer for the very big Venomspout Brackus. Maruyama continued his parade of fat with Spitting Gourna. Nakamura answered with Gustcloak Skirmisher. Maruyama got ready to breach Nakamura's defences with Grassland Crusader. Both players made Daru Cavaliers. Nakamura added a Dive Bomber, still without an mountain to enable his Shock and Solar Blast.

He found a mountain, but waited for the time to act. Murayama, too, was waiting. He made another secret ogre and passed it back. Again Nakamura had no play. That was Murayama's cue. He Swatted the Dive Bomber at end of turn, then untapped and Pacified the Skirmisher, swinging with four dudes. The Gourna traded with the Cavalier when Nakamura doubled-up, but Maruyama just replaced it with a second Gourna. Nakamura made Catapult Master and tried to look helpless. Murayama swung with the same four.

That was the turning point. Choking Tethers cycled to force out Maruyama's Grassland Crusader, costing him a Cavalier. On his next attack, with Nakamura falling to low life, Catapult Master and Sparksmith teamed up on the Gourna. The Crusader pumped the lone Cavalier only to see it Shocked, and when he tried to off the Master Nakamura was ready with a cycled Sunfire Balm.

Maruyama tried to rally with Barkhide Maulter, but Nakamura was in full effect. Slipstream Eel was a huge defender, buying him time to bring out Mistform Shrieker. Rummaging Wizard and Imagecrafter joined his team as well. Though he had no cards in hand, things were going his way. He Rummaged into key cards, and stopped when his library started to get low. An emergency defender from Maruyama was taken out with a known-quantity Erratic Explosion, and he smashed to victory with just two cards left in his library.