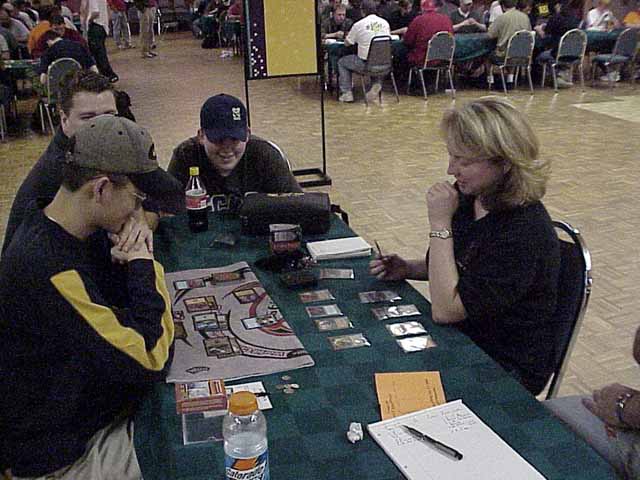 One Deadguy, and one Deadguy affiliate, with a possible berth in Day 2 on the line. Tony and Lauren sat down to play round 7 with both of them knowing that a loss meant that it was side-draft time tomorrow. These two friends know each other well, and have played each other plenty of times in the past, because where one finds Deadguy Dave Price at a tournament, one can usually find Lauren as well. The mood was light, despite the consequences of losing, as both players jabbed back and forth with verbal banter that was entertaining to all of the onlookers. 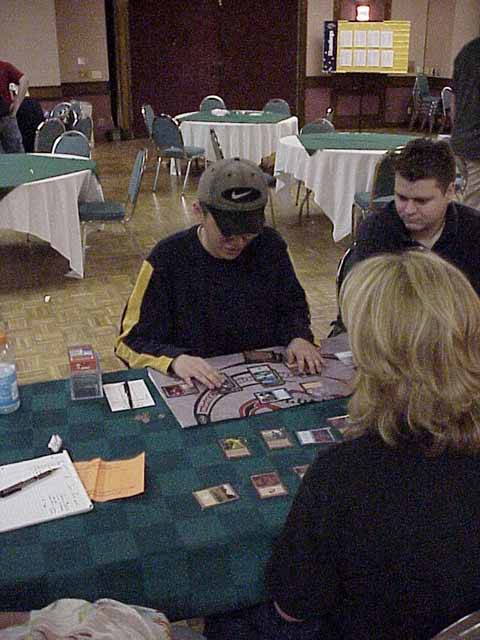 Tony won the flip and elected to play first in game one, mostly because he thought Lauren had the faster deck and didn't want her to get out of the gate too fast and swarm him before he could muster a defense. After Tony just played land for the first 4 turns, he finally played a 5th land and a kicked Duskwalker on turn 5. Unfortunately for him, by this point, Lauren already had a Stormscape Apprentice, and Nomadic Elf in play whittling away at his life total. Tony's deck really kicked in after that turn, though, as the monsters started falling with stunning regularity after that. A kicked Vodalian Serpent on turn 6, (Lauren had an island in play), followed in successive turns by: kicked Faerie Squadron, mourning on Lauren's elf, Fact or Fiction, Thunderscape Master, and Vodalian Serpent #2. Lauren fought valiantly late into the game, playing out a couple more 'Master Decoy' type creatures and keeping the pressure on with a Rith's attendent. Lauren admitted that she made an error at one point in this game, where she used an Explosive Growth to kill a blocker instead of do an extra 5 damage. Eventually, the Thunderscape Master (which Lauren managed to kill once, but got Recovered) started doing his thing and the 2-point drain life every turn did the job and finished Lauren off in a tight game. 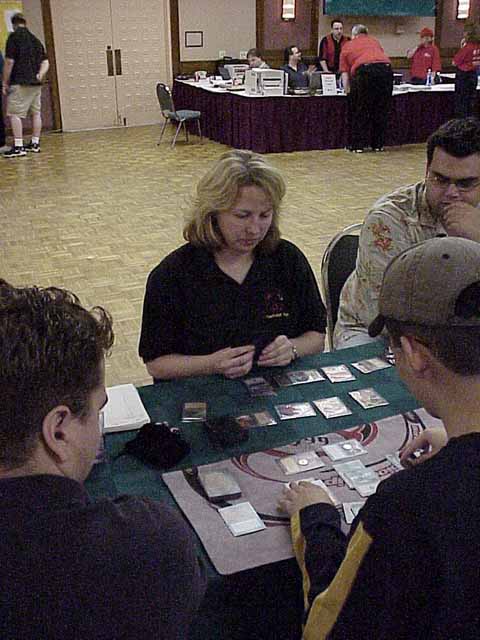 The second game started out much the same way for Lauren, as she led with a one mana 'decoy' and followed with a turn 2 Nomadic Elf. Tony kept a suspect draw with a couple of Islands and a few early plays, but drew into a few land and managed to trade a Tower Drake with the Nomadic Elf early on and avoid some damage. Lauren kept the pressure on with a kicked Ardent Soldier, followed by a turn 6 Zanam Djinn, and a turn 7 Ancient Kavu. Tony kept up though, destroying a Benalish Trapper with an Exotic Curse, and playing out some fairly decent blockers in the form of a kicked Faerie Squadron and kicked Vodalian Serpent. When Tony played his second Vodalian Serpent, almost in desperation, Lauren smelled blood. Tony's life was low from the various tappers and small creatures, so Lauren sent the whole squad in an alpha strike. Tony looked, calculated, and ended up blocking in such a way that only the Zanam Djinn got through for 3, with Tony's Faerie Squadron killing off the Ardent Soldier. Lauren got a weird look on her face, realized that she just did 3, and not the 4 that Tony was at, looked over at the two kicked Vodalian Serpents that were about to untap, and packed it up.

Oops! Everybody can make a mistake, Lauren later admitted that she was a little rattled from her less obvious play error in the first game and just had a brain fart.