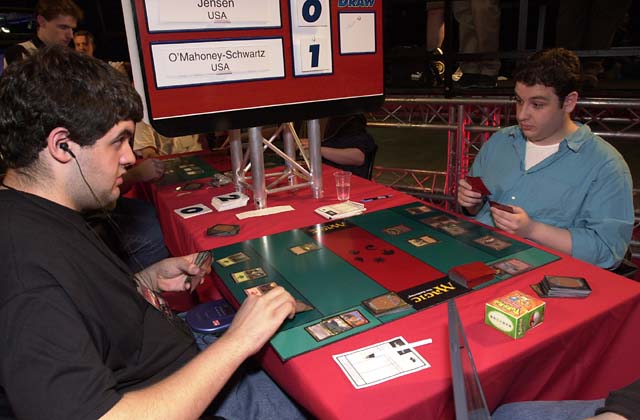 Billy "Huey" Jensen and Dan O'Mahoney-Schwartz were both feeling good after going 3-1 at their first draft tables. However, after losing each of the next two rounds they were in do or die mode during round 7. Only the winner would be invited to play Day 2. Despite the stakes, they were joking around as they shuffled up and whispering to each other about plans about for entertaining the crowd. Huey kept score by writing on his hand until Dan offered him some paper. Huey responded by offering to let Dan listen to his headphones.

Huey drew a lot of great cards in game one - Fertile Ground, Raging Kavu, assorted other good green creatures, and a Tahngarth. The problem was that his green-red touch black deck drew three mountains and an Urborg Volcano. He had been complaining about not drawing lands in his two previous rounds with what looked like a good deck and that pattern continued in game 1, staking Dan-O to a one game lead. Dan's Sinister-Strengthened Nightscape Familiar and his Mire Kavu made sure the game didn't last long enough for Jensen to draw any green mana. 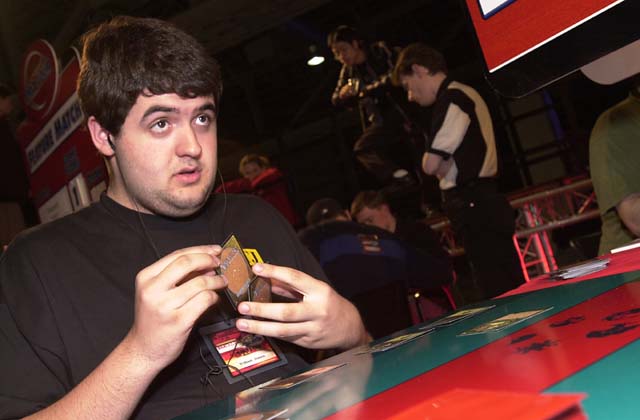 Huey announced "I'll keep" when the first two cards he drew for game 2 were Forest and Mountain, but when the next five cards were also lands, he changed his mind and went down to 6 cards. He then failed to play a land on turn 2, but his deck delivered up two in a row and he barely missed a beat. Pincer Spider and Mirrorwood Treefolk gave Huey control of the ground, but OMS put Maniacal Rage on Phyrexian Battleflies and tried to race in the air. OMS 's Flametongue Kavu helped him clean the ground war up and a couple of creature trades later the Maniacal Battleflies was the only creature in play.

Then Huey played Tahngarth. Dan thought for a while and decided to leave his mana untapped so he could finish off Tahngarth with Scorching Lava after it fought the Battleflies. Huey was out of gas after that, but Dan still had a Recover, which brought back Mire Kavu, which rapidly turned Huey into a tourist. 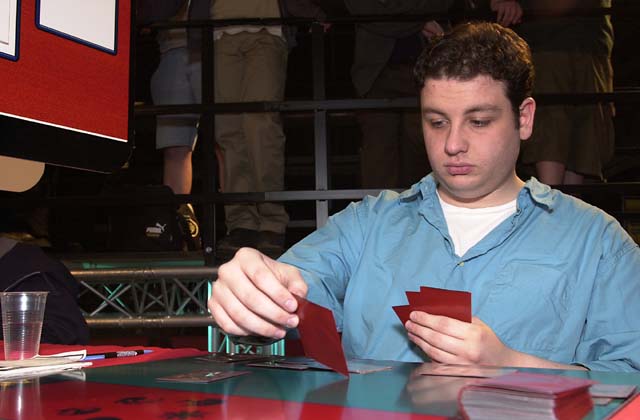