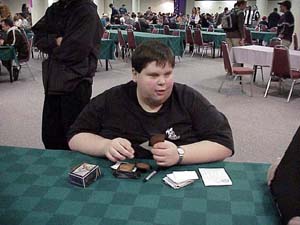 In the undefeated bracket William "Baby Huey" Jensen faced off against David Weitz. Weitz is most well known for a top eight performance at Grand Prix Seattle, and was a regular on the Pro Tour for a couple of years. He has not been qualified for the PT recently though and was excited about his 6-0 record. Baby Huey is a regular Pro Tour player and widely regarded as one of the best players in the game. His most notable finish to date was his win this year in the Masters Series at New York. Both players are hoping to win in order to remain undefeated and avoid being forced to take an intentional draw to make the second day.

Game one was swift and brutal. Both players traded creatures and removal for the first few turns. When the smoke cleared Huey's creatures included Caldera Kavu and the amazing Flametongue Kavu while Weitz's were less impressive: a Slimy Kavu and the abysmal Scarred Puma. The disparity in creature quality was even more obvious when Jensen played Crosis, and the game was quickly ended by the huge flier. 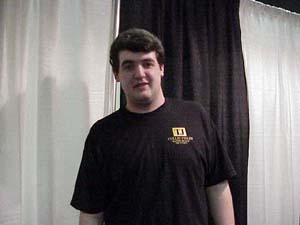 In the second game, Weitz seemed to get off to the faster start with a Quirion Explorer. However, when he failed to play a third land Jensen killed it with Exotic Curse and Weitz soon had to discard. Huey in the meantime began to drop creature after creature. David finally drew a land, but it was a Geothermal Crevice, which meant he had to wait another turn to play anything. Huey followed with a Hypnotic Cloud with kicker, leaving Weitz shaking his head and saying "Unfair, unfair." He tried to mount a defense as Shoreline Raider continued to whittle him down. Huey had stopped drawing anything but land, and it started to look like David might actually be able to mount a comeback. The Shoreline Raider was stopped by a Death Bomb, and Weitz got out a few red creatures. Huey drew Andradite Leech with many swamps in play, and then a Wash Out to end the game.

Jensen admitted that Weitz was "wicked screwed," but seemed confident that he could have won anyway. Huey continues undefeated. David is happy with being 6-1, but since he had only one bye he thinks he'll have to take the intentional draw next round if possible, to insure making it to the draft portion of the tournament.