Round 7 Feature Match: Your Move Games vs. YourMoveGames.com

This matchup pitting Dougherty against O'Brien was as identical as their t-shirts. Both men wore the black and the red of YMG, and both men played plains and islands. Rob started out with the good stuff: Mental Note, a Cephalid Looter, and a Mystic Zealot. All O'Brien could play by turn four was Wonder, and Rob followed up with Ambassador Laquatus- a power card in the match up. 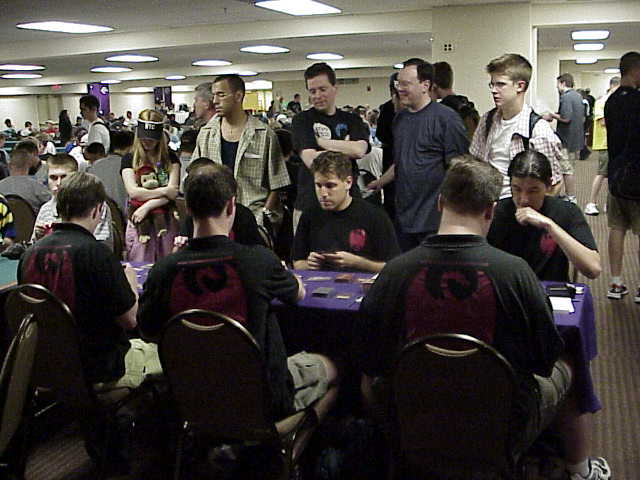 O'Brien kept up the spell count by enchanting Rob's Mystic Zealot with Kirtar's Desire, and summoned a Zealot of his own. Dougherty continued to pull ahead of his opponent by using his Looter, and summoned some more monsters to do his bidding.

O'Brien tried to pull away, and cast a Breakthrough for five, discarding Valor. Rob got through for damage by sending with an activated Mirror Wall, followed up with a Zealot, and passed the turn back to Dan. Dan played some quick catch up, casting Deep Analysis. He was trying to get closer to Rob, who was pulling away with his multiple Zealots and attacking walls. Plus, he now had threshold, thanks to his Cephalid Looter.

With two Zealots on the rampage, and with no shortage of land, Dan deemed the time right to try Persuasion. All of a sudden, all those extra lands he had drawn were a boon, as his freshly acquired Ambassador Laquatus was a flying, first strike, diplomatic mastermind. Rob's board was still strong, consisting of two Zealots, Mirror Wall, the Looter and a Phantom Nomad.

Next to Rob was Dave Humpherys, who had just taken game one against Danny Mandel, in a blue/black on blue/red match up. The Dan on Rob mirror match continued with O'Brien trying to stave off death, adding a Dreamwinder to his side. Dougherty seemed up to the challenge, and just swung with everyone, including the Looter. Dan was at five, and needed an Embolden to stay alive, but he did manage to kill off two of Dougherty's creatures. Repel sent a Zealot to the top of Dougherty's library, where it fell prey to the treacherous Laquatus.

With all of his threats either matched or destroyed, Rob had no choice but to scoop it up, and move on to game two.

Game two started with both YMGers playing turn three Cephalid Looters. The game moved over to the .com side of the table when O'Brien played a Deep Analysis, putting him ahead in the card advantage race. Rob was able to add some more threats to his side while O'Brien's side remained empty. Both players were Looting away all the while.

Meanwhile, the blue/white matchup was still going on. Dan cast Persuasion again, but this time he had to settle for a Mirror Wall. Sometimes you have to do what you have to do, and the Wall was not a bad threat, since all of Rob's creatures were small.

Rob broke the game open, or at least tried to. He played Aura Graft, trying to move Persuasion to a creature that Dan already controlled, but Dan simply madnessed out Circular Logic, drawing a card with his Cephalid Looter. 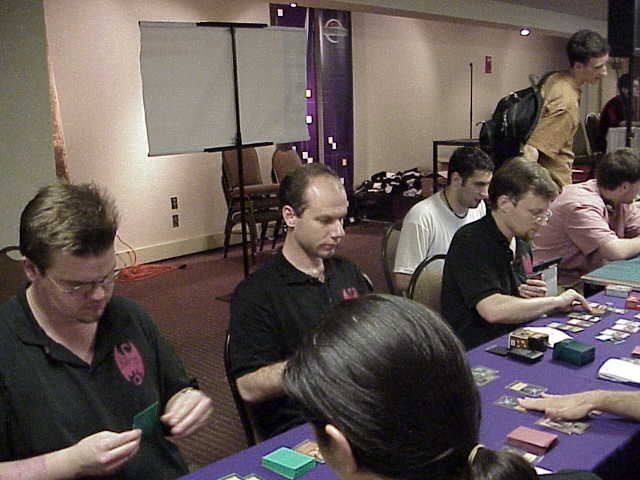 Dan tightened his defenses with another dork, Aquamoeba, and a Kirtar's Desire on Lieutenant Kirtar. Oh, the irony. That is, until Rob slipped the Ambassador back into play, and was promptly trumped by O'Brien's Amugaba. Who would win in the battle of blue rares? Both players had Looters, but without an answer to the unanswerable Amugaba, the game could be over very soon.

On the first swing, Rob sent Lieutenant Kirtar in front of the flying "bus", and sent it back to Dan's hand by activating the ability. Rob jumped back into the race. With the Amugaba back in Dan's hand, Rob started working and O'Brien's library with his Ambassador. The Amugaba came back out, but Laquatus struck again, sending three more cards to the bin, and put O'Brien that much closer to being decked.

Looking over at Mandel vs. Humpherys, there were a lot of lands on the table and Pardic Collaborator on Mandel's side. Moments later, the game was over, and off to game three went Humpherys and Mandel.

When Wonder went to O'Brien's graveyard, he tried an all out attack, but couldn't get enough damage to win the game, as Laquatus spelled his doom.

Game Three, there seemed to be some attacking going on, as O'Brien led with turn two Phantom Nomad, turn three attack...um, go. So much for a blazing start. Rob came back with Lieutenant Kirtar, and seemed intent to actually end a game through dealing twenty damage. The same must have been in Dan's mind, as he sent a Guided Strike at Rob, for an extra point of damage. This was essentially an undercosted Zap.

Of course, Rob chose turn four as a good time to play everyone's favorite Merfolk, Ambassador Laquatus. Dan had the Persuasion ready, but Dougherty had Aura Graft. A passing Judge looked at the Graft, and said "Rob gets the creature." Rob, who was apparently unaware of how the cards interacted, simply stated "Who knew?"

Rob had a newly acquired Phantom Nomad, and the game was off to absolutely nowhere. However, the Ambassador loomed larger and larger as Dougherty played more and more land. 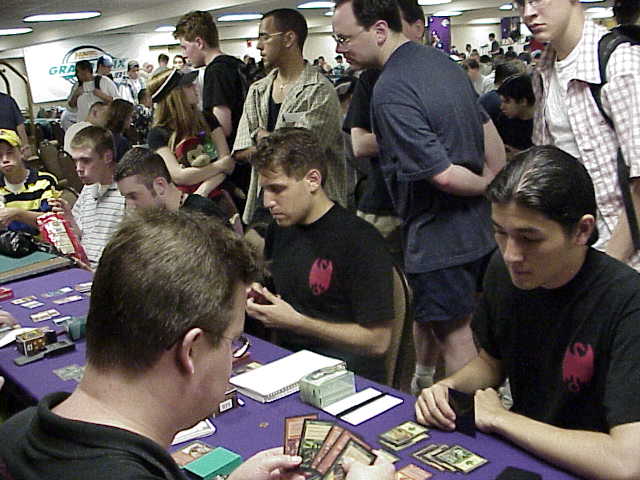 Rob tried to get threshold by using Laquatus on himself. Dan was game, targeting Laquatus with Repel, putting the Legend in harm's way on top of Rob's library with the mill effect on the stack. Rob avoided disaster by saving his Laquatus with Cephalid Looter, and the Legend lived to fight another day.

Meanwhile, Dan had two Mystic Zealots, but no threshold. If there was one key difference between this game and the previous two, it was the lack of any card advantage for O'Brien. Dan did trade Shelter for a creature, but the Angelic Wall he followed up with was not fearsome. Rob had eight lands in play and Laquatus became active, sending the top six cards of O'Brien's library to the graveyard.

With his time dwindling, O'Brien summoned Amugaba, in an attempt to make a run for a win with time running out. But, with nine lands in play, Laquatus managed to end the game for the third time this match.

Mandel won a close match against Humpherys, and so the round came down to Vabulas vs. Kastle. Darwin won, the round ended, and the older generation of YMGers triumphed over the newer models. The winners moved on, and the losers went to sleep.