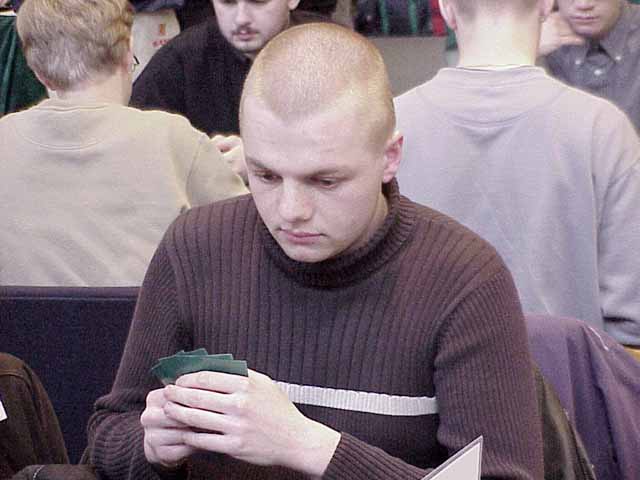 In the final round of day 1 American Zvi Mowshowitz met Norwegian Nicolai Herzog. Both are very well known on the Pro Tour. Herzog is a one time European Champion who also has a Worlds top 8 finish. Zvi Mowshowitz's top tournament finish was top 4 at Pro Tour: New York and he is also well known as a top deck designer and a Magic columnist.

There is little pressure in this match. Both players are virtually guaranteed to make day 2 despite the result of this match. The winner of the match is in a much better position for the top 8. The match drew quite a crowd of spectators, including the notorious Kimmo Hovi.

As both players drew their hands, it was pretty clear that Zvi would end up a winner of this game. Although anything can happen in a game of Magic, sometimes looking at the opening hand of each player is enough to predict a fairly accurate result.

Herzog's hand featured a few lands, a Rampant Elephant and a Zanam Djinn. Not bad normally, but Mowshowitz was ready with faster creatures, Agonizing Demise and Spite/Malice.

Zvi played out a Dream Thrush and a Shoreline Raider, starting up an assault. Herzog was able to trade his Elephant in combat for the Raider, but Zvi increased the pressure, casting a Pouncing Kavu with kicker and lowering his opponent's life total.

Herzog drew Shackles but chose to play a Sulam Djinn, which he drew earlier,ginstead. Although this was a correct play it cost him dearly. Mowshowitz cast Agonizing Demise with kicker, dealing four extra damage and was able to attack with his Kavu.

Herzog Shackled the Kavu, but Zvi showed yet another threat - he cast a Vodalian Serpent. Although Herzog did not play any Islands, Dream Thrush would allow Zvi to attack.

At this point Herzog top-decked Harrow. It was an excellent draw at the moment. He could wait for Zvi to turn his land into an Island, then sacrifice that land to Harrow and get a Mountain he badly needed to cast direct damage spells in his hand. Somehow Herzog missed this play and conceded. To be fair, based on the cards in Zvi's hand, he was going to lose the game regardless.

Second game did not go well for the American. He kept a two-land hand and did not draw the third land for six turns. Herzog mulliganed but came out of that nicely, developing quick offense and taking Zvi down before he could recover from his poor draw. 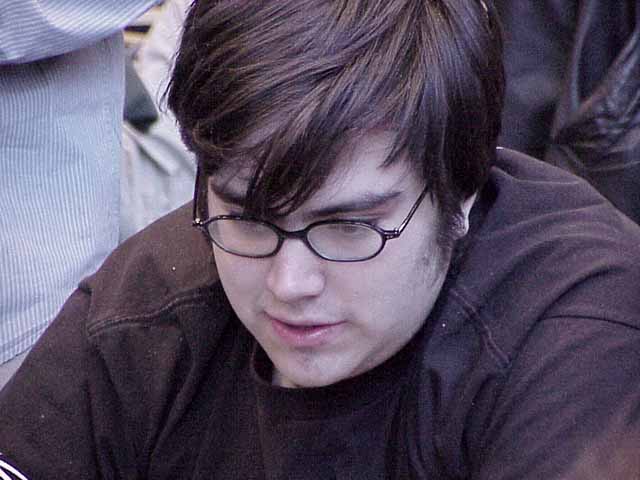 Final game saw Herzog take another mulligan and keep a hand of six lands and a Prohibit. Mowshowitz opened with a Kavu Scout, which was 3/2 as he drew all of his colors early this time.

Both players were seriously mana flooded, with over ten lands on each side of the table toward the end. Herzog found the answers to some of the threats Zvi posed later on, but the Kavu Scout remained on the table. Zvi played Power Armor and suddenly Scout became an unstoppable threat. Herzog was at a relatively high life total and was able to survive several more turns, frantically searching for an answer. None would come though - he went on to draw more lands.