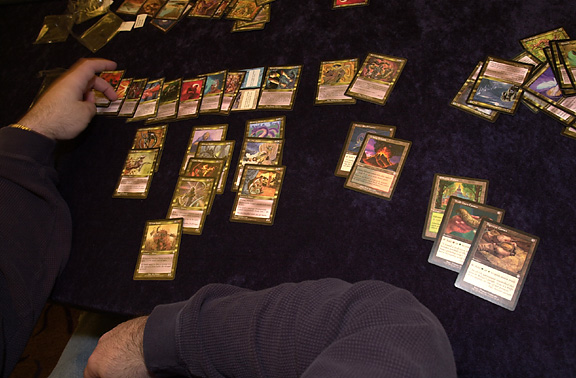 The third format of the Invitational featured Solomon Draft. Players received 12 pre-designed eight cards packs. One player then opened the pack and divided the cards into two piles of any size. Once finished the receiving player chose which pile he/she kept, the other pile going to the other player.

Round seven of the Invitational featured New York's Zvi Mowshowitz vs. Toronto's Gary Wise. The two were recently involved in the well-known Team Mogg Squad, which recently broke up. Gary Wise drafted a Black, Blue, Red deck, the only three color deck in the Invitational. Going into the match confident and sure of himself, Gary seemed more positive than Zvi Mowshowitz who opted to build a five-color deck, considering that over 90% of the cards in Solomon draft was gold cards.

Game two looked much brighter for Zvi, who drew a solid mix of creatures and land as opposed to his mana surplus in the first game. By fourth turn, Zvi played 3 Invasion Multilands giving him access to all five colors. As before, Gary Wise came out strong with a second turn Hibernation Silver backed by Seal of Fire, Plague Spores and Smoldering Tar. However all this was no match for Zvi's Fires of Yavimaya, Vicious Cobra, Sawback Masticore and Armadillo Cloak. Trying to race each other, Wise was soon shorthanded in life total thanks to Zvi's Armadillo Cloak on his Vicious Cobra. The whole game, Wise was waiting for Zvi to play his second creature to use Barrin's Spite, however Zvi was playing smart and only kept to one creature. In the end the first-striking, venom, spirit-linked, trampling Cobra proved too much for Wise.

Game three was less dramatic, Zvi mulliganed while going first. Unable to play many spells, due to having the wrong land and too few of them, Zvi's only spell played was Sky Seer. Gary Wise, on the other hand, performed much as he did in the first two games. Second turn Hibernation Silver (third time in a row) followed by a third turn Urborg Drake, Smoldering Tar and Benthic Djinn sealed the game in a flash. In the end, Wise credited his success to his drafting tactics and Jedi mind games he played on Zvi in the Solomon draft.