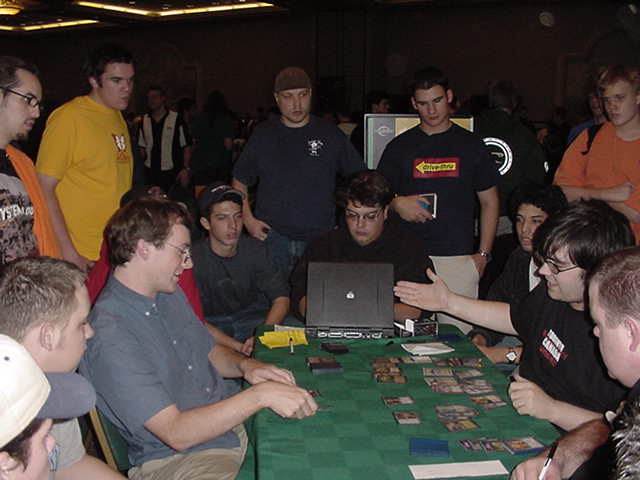 Zvi needs no real introduction. Combo builder extraordinaire, the mad scientist of magic, and most importantly, the designer of Turbo Land, his deck of choice for this weekend. Zvi is using a few important modifications for this event. Expecting a control laden field of play, he has brought back his old school design, forgoing the Oath of Druids engine, and bringing in Thawing Glaciers and Call of the Herds.

Tim McKenna is using one of the popular 3-color agro-control decks, Star Spangled Slaughter, brought into creation by Chris Pikula for PT New Orleans. While most of these decks have moved towards using another name-sake card, Shadowmage Infiltrator, Tim has kept it pretty close to the PT New Orleans build.

These two have faced off once before, back in the Neutral Ground grudge match of last year. Zvi served up a face smashing in that one, using Fires to overwhelm McKenna's Nether Spirit deck. 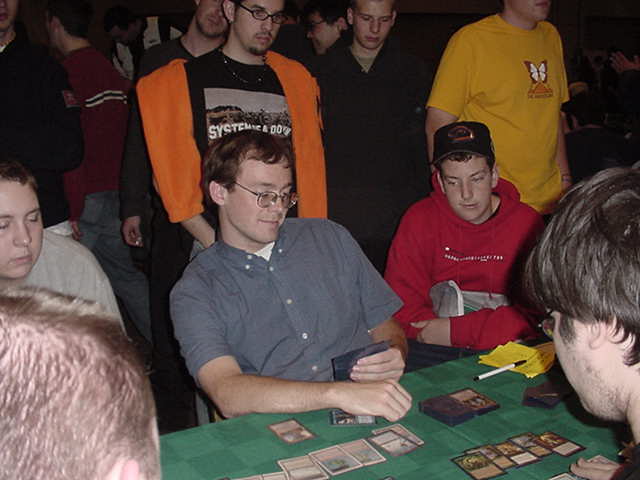 Zvi opened up with his technology of Thawing Glaciers, but it met with a Wasteland before it could do any damage, his Treetop Village met with the same fate on the next turn. Of course, with a deck called Turbo Land, you don't think a little thing like that will stop him do you? Zvi proceeded to unload a fist full of islands, scroll racking, Accumulating Knowledge and holding Brainstorming sessions to find more business spells, and finally turns over another Glaciers. Tim meanwhile is content to play lands that swing for damage, bringing his Fairy Conclaves to bear. (Sorry folks, in control on control, the lands ARE the match-up, not exciting, but very important). A true business spell from McKenna brings a Lightning Angel down, through a flurry of countermagic, with another landing on the following turn. With Zvi now staring down a one-turn clock, it was time to start digging for an answer, and a chance to go infinite. It didn't happen.

Zvi has the full Oath of Druids toolkit in the sideboard, the question is with only the appearance of a pair of Lightning Angels, is it worth it? Zvi teased him about effective clock management, his tie breakers more than high enough to make it in on a draw, while McKenna is in Sixty Fifth place heading into this round, not a terrific place to be.

Again Zvi kicked off with a first turn Glaciers, and this time it stuck around long enough to get him into a forest, exploration and an early mana advantage. McKenna found a Wasteland before the damage became too severe, but it may have been too late. Zvi proceeded to force a Horn of Green onto the table, then another Explorations, several more lands, and a Dustbowl, which looked pretty solid against McKenna's all non-basic land deck. By the end of the 5th turn, McKenna's Ophidian looked downright pathetic compared to Zvi's Oath of Druids, Explorations, Horn and... oops there's a Morphling. Before you could blink, Zvi was manipulating the fundamental rules of the game, taking extra turns, putting creatures directly into play and generally making Mr. McKenna frown a lot. Then he stopped frowning and started scooping.

Apparently the Oath plan was the right way to go, and McKenna heads back to his sideboard, furiously yanking out useless Swords to Plowshares to bring in some real hate cards. 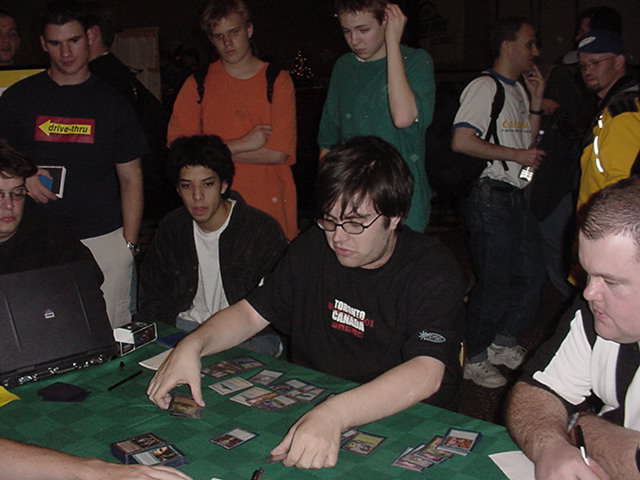 For the 3rd game straight, Zvi is able to kick off with a Glacier. Oath hits on turn three, but this time McKenna has the Seal of Cleansing for it. A Meddling Mage for Oath of Druids closes off that nonsense from there-on. This time Ophidian doesn't look nearly as insignificant. Two more Seal of Cleansings, served up the snake, and brings McKenna into a fairly favorable board position. Lightning Angel makes it even better, but Zvi turns it around with a hard cast Morphling and plenty of spare mana. With an Explorations on the table and a pair of Thawing Glaciers, Zvi is bringing a ridiculous amount of mana to bear, making Morphling even more dangerous. McKenna loaded up the board with creatures, hoping to bum rush past Morphling. He gets in 5 damage, bring Zvi down to 8, but with Superman and a Treetop Village still standing after the smoke had cleared, it looked bad for McKenna. As time ran out, Zvi looked to be safely in control of the game, but it looked highly unlikely that he could punch through lethal damage in just those 5 remaining turns. (Even if he took all of them). However, a quick Oath from Zvi brings the 2nd Morphling into play, and he suddenly has two more turns than he needs.

4 Swords to Plowshares 4 Seal of Cleansing