Round 7: Forrest Sullens vs. Michael Senger 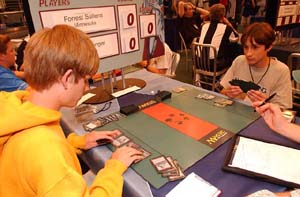 This match looked like it was going to start off slowly with a deck check, but the time used for inspection proved entertaining thanks to Gary Wise and Mark Rosewater. Gary was introduced as a living legend, whom the gamers might recognize from Wise Words. When told this, Forrest asked in an excited voice, "Is that the guy that does the trivia?" Poor Gary, he gets no respect. Rosewater joined in at the mere mention of trivia, and offered the question of what the first card to make squirrel tokens was. The answer: Leige of Hollows from Weatherlight. All this, and they hadn't even shuffled!

The decks returned without any problems, and soon after they were randomized and ready to play. Forrest, from Minnesota, led off the game with and Island. His 14 year old opponent from California followed quickly, and the boards were even. Forrest had the same play for the next few turns, never playing anything on his turn. He did take the time to Memory Lapse and then Repulse a Wild Mongrel, keeping the sides even. He stopped playing lands after that, and looked to be mono-Blue at this point, as Mike was ready to play out his Mongrel yet again. It was met with a Counterspell, which was Countered, which was Memory Lapse'd. No Mongrel, board parity yet again. Forrest finally got another color from Yavimaya Coast but had no Green card to go with it. He did manage to Force Spike a Fact or Fiction though, still maintaining equity on each side. Another of Mike's Mongrel's was lost in the exact same counter war, and Forrest finally played something on his turn, a Werebear. The bear was Counterspell'd, and a Nimble Mongoose resolved after a miscalculation by Mike on his Circular Logic as Forrest had plenty of lands. A Looter, a Mystic Snake on Arrogant Wurm, and a Werebear later and we were on to game 2. Forrest was all smiles, suggesting the feature match should have a disco ball in case the competitors felt like dancing.

Mike led off with a Rootwalla, while Forrest again played Islands each of his first 3 turns. He Repulsed the Mongrel that was played, after the Rootwalla was pumped up in combat. He put out a looter, and braced for another attack, ready to Gainsay the Repulse on his own Looter. Since Mike was stuck on 4 lands, he couldn't Repulse and play the Looter, so the tempo was moving in Forrest's favor. The trend continued as he was able to Mystic Snake the Mongrel on the following turn, and lay down a Werebear. Another Mongrel met a Counterspell, and Mike was looking desperate, having drawn very little in the business department that he was able to cast. The next turn showed some mirror match technology in the form of Krosan Beast. With Forrest well over threshold, this was truly one huge squirrel. Mike couldn't find bounce or keep a chump blocker on the table and extended the hand. Mark Rosewater's squirrel reference began the match, and the biggest squirrel brought it to a close.