Round 7: Franck Canu vs. Eloi Cabacas 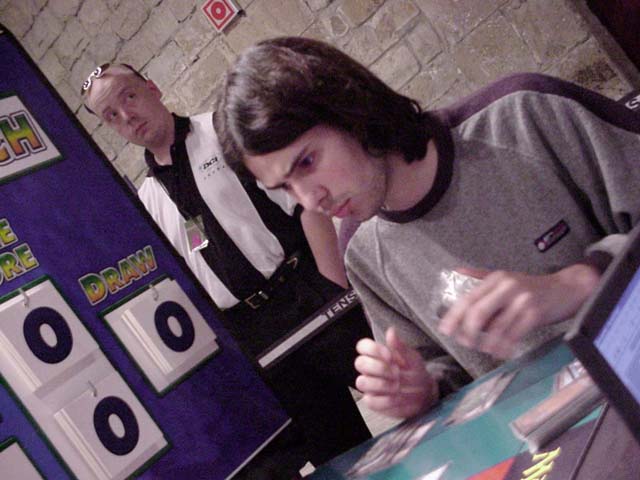 Night has struck Barcelona and with it a cold breeze to contrast with the sunny afternoon. We had the well-known Franck Canu, who is one of the best French players currently and Eloi Cabacas, who had a perfect 6-0 record having had no byes.

After some shuffling Eloi decided to go first. Both players kept their opening hands and started by laying lands. Cabacas then dropped a Crypt Keeper, which got Firebolted.

Franck forced his opponent to discard via Unhinge netting a two for one card advantage. Eloi cast an Aven fisher, as did Canu. Next turn the Avens traded and both players drew a card. Franck then summoned a Dwarven Strike-Force to get things going but his opponent cast an Aven Windreader together with a Aboshan, Cephalid Emperor. Cabacas then attacked with both his Cephalid and his Aven to see Canu declaring no blockers. The Frenchmen then thought long and hard before attacking with one flying creature, since his opponent used Aboshan's ability to tap his Strike-Force. Canu was needing a solution so he cast a Cabal Patriarch, which Cabacas syncopated. The Spanish then joined a Cephalid Looter to his team and hit his opponent for six leaving him at five. He then tapped the Dwarves once again with his Looter through the Empress's ability. The Frenchmen dropped a Chainflinger and a Fledgling Imp to try to stop his opponent. But Cabacas just tapped his opponent's Aven, played a Crippling Fatigue on the Chainflinger and Canu conceded.

The Spanish's deck was very powerful and consistent, having only good, playable cards with some bombs in the middle of them.

Franck sideboarded out blue and green in, hoping to be more aggressive and maybe stand a fair chance against the blue-black deck.

This time the Frenchman started more aggressively with a turn one Rootwalla and a turn two Mesmerian Fiend taking out a Faceless Butcher. Cabacas with his more controlling deck had nothing to do the first three turns. Canu took advantage of it and kept pounding with his Rootwalla. Cabacas then cast innocent blood for a Rootwalla, which served his purpose with five damage. He then cast a Wererat to block the Arrogant Wurm his opponent had just cast. Then, he tapped out to play Aboshan to stop the Frenchman's offense. During Canu's attack fase he tapped his arrogant worm, which lead to zero attackers.

Eloi was now able to use his mana to tap all his opponent's creatures and attack with his own Wererat. Franck was not to pleased about how this game was going for him. An Aven Fisher then joined the party and Franck Canu's attempts to attack were futile with the Aboshan on the table. So he cast Fiery Temper on it and summoned a Grotesque Hybrid (also called Morphling).

Cabacas now had to find an answer and so he did with Gravedigger to get his Aboshan back. Unfortunately he had no mana to cast it and so the Frenchmen was able to execute an attack unhindered. So he did, by attacking with Arrogant Wurm, Grotesque Hybrid and Rabid Elephant. The Spanish decided to block the Hybrid and the Elephant with his Wererat and his Gravedigger thereby tanking four damage. On his turn he cast Aboshan. During Franck's turn he tapped one creature and blocked with his Aven Fisher. Canu then cast Acceptable Losses on the Aboshan to see it get Aether Bursted back to the hand. Cabacas finally had mana to cast his creature and use it's ability during his opponent's upkeep, but Franck discarded a card to give his Hybrid flying and serve the remaining two damage through the air 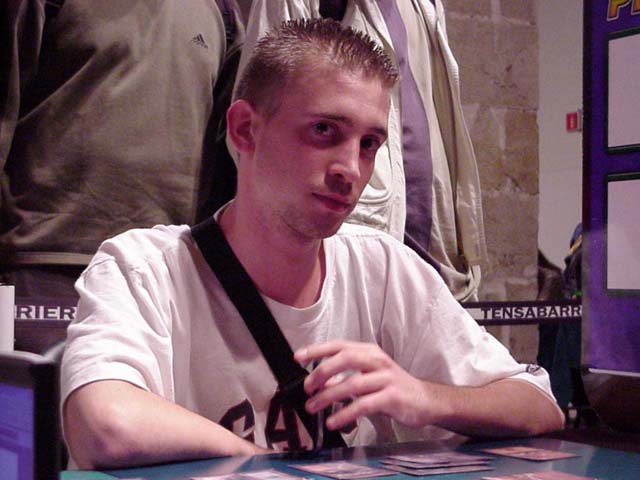 After some land drops Canu played his Mesmerian fiend taking once again a Faceless Butcher. He then played his Chatter of the Squirrel twice to start serving the Spanish. Cabacas played an Aven Windreader, which got three damage from Fiery Temper. With eleven minutes on the clock Canu was playing as fast as he could.

Eloi played a Hydromorphic Gull and Canu drew five cards off his Skeletal Scrying. Cabacas attacked with his flyer and dropped a Crypt Keeper. Canu attacked once again with his squirrels and when asked if he was done he shook his head as if saying that there were a lot of things coming. And so they did with Krosan Avenger, Krosan Restorer and Rootwalla. Cabacas was starting to worry.

He cast Chainer's Edict, which netted him a squirrel. Franck attacked on his turn with his Avenger and his Rootwalla. The Keeper blocked the Avenger and removed Skeletal Scrying.

Canu then played an Arrogant Wurm and a Gravedigger getting back his Avenger. Cabacas could only play an Aven Fisher and hope for a solution. His opponent attacked with both his Wurm and his Rootwalla. The Spanish blocked the Rootwalla with the Gull and the Wurm with the Fisher, being down to four life. Still, his opponent didn't think it would be enough and summoned a Zombie Assassin. Cabacas ran his hands through his hair, looked at all the cards in play and conceded.