Round 7: The Frenchman and the Englishman 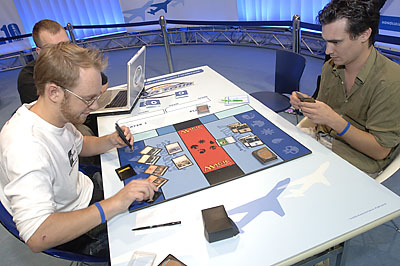 talked to Pierre Canali at breakfast on Thursday, and he said he was nervous before the tournament because he had not had time to prepare nearly as much as he would have liked. Work had been particularly busy for him lately, and he predicted an underwhelming performance for himself this weekend. Pierre of Thursday would be quite pleased to know that Pierre of Friday posted a 5-1 record through the first six rounds of the tournament and now needs only to defeat unwashed English vagabond Quentin Martin in order to give him very good position heading into the second day of Swiss. Martin obviously would like to be in the same boat, and drafted a fast red-white Rebels deck fully capable of allowing him to do just that.

Martin cast a Knight of the Holy Nimbus on turn 2 and Amrou Scout on turn 3 giving him an outstanding start to game 1. Canali's first play was Telekinetic Sliver, answered by a search for Amrou Seekers from Martin. Quentin kept the Rebel chain going a turn later, casting a Coal Stoker and chaining that into another search, this time for Zealot il-Vec. Yes, folks, the Rebel chain is still quite awesome in Limited.

Canali was trying to fight back, trading Bonesplitter Sliver for Martin's Stoker, Assassinating Amrou Seekers, and then putting Basal Sliver into the mix, trading with one of Martin's Scouts. Moorish Cavalry hit the board after another attack, and it was all over, as Canali revealed three lands left in his hand. 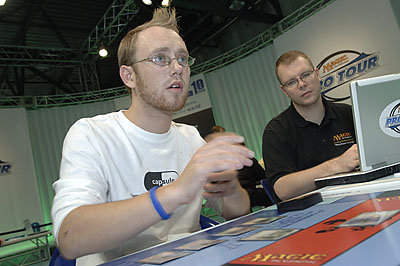 Martin again started the game with Knight of the Holy Nimbus, adding a Zealot right behind it, while Pierre opened with Spiketail Drakeling and Nightshade Assassin (which killed the Zealot). Quentin cast Amrou Scout and Errant Doomsayers a turn later, noting his strategy to be "mono-Rebel." Canali's army was a bit less homogenous, now sporting a pair of Drakelings, a Sliver, and the aforementioned Assassin. Martin was still keeping up reasonably well, but his mana was constrained, because he couldn't get past four lands, thus making certain he was only making one play a turn. Shadow Sliver from Canali gave the Frenchman more evasion, putting Martin on the brink of losing, but Temporal Isolation brought him right back, grimly clinging to 4 life. A slow-played, unmorphed Brine Elemental then finished Martin.

Canali: "I am so tired. I keep waking up at 4AM every morning, and I cannot play right now. I just have to hope the deck gives me the good cards."
Karsten: (from the peanut gallery) "You have to play the deck just like you are dancing salsa."
Canali: "If I think about salsa, I will think about sex, and with Quentin Martin sitting in front of me, I definitely don't want to think about that." 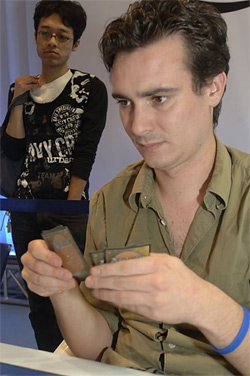 For the third game in a row, Martin's deck came out exactly as scripted, this time delivering Amrou Scout and Errant Doomsayers on turns 2 and 3, to Canali's obvious dismay. Cavalry Master, Coal Stoker, and a Rift Bolt on Canali's Vampiric Sliver left Canali in a deep hole, one so deep that three removal spells could not help him dig out. Of course, the avalanche of unwanted lands did not help either.