Round 7: Gab Tsang vs. Ryan Fuller

As the players sat down for Round 7, defending Canadian national team member Jurgen Hahn looked over at the feature match table and said, "Holy S***!" "Yeah, that's a good feature match," someone answered. "You mean the best two guys in the country?" With apologies to Gary Wise, Hahn's claim is quite defensible. Ryan Fuller and Gab Tsang were sitting across from each other, ready to battle it out. 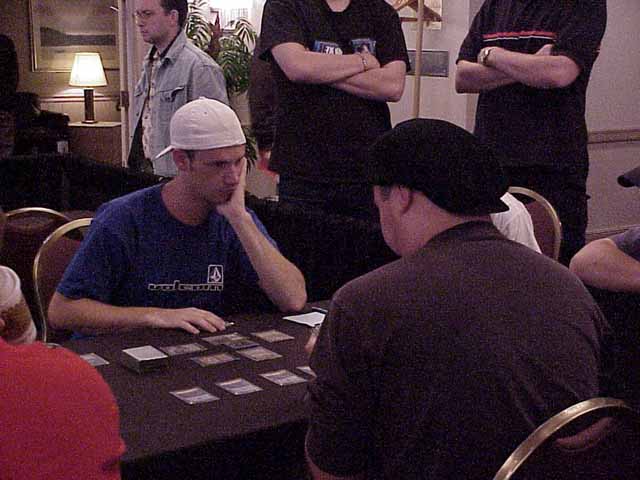 Fuller was playing a Stompy deck with three copies of the Prophecy card Wild Might. Tsang ran a mono-blue deck that was somewhere between Draw/Go and Accelerated Blue. He has 4 Grim Monoliths, but only 6 creatures (3 Masticores and 3 Morphlings). Tsang's design includes 14 counters (including two main deck Annuls) and 26 land.

Fuller won the die roll, but had to mulligan. His new hand was kind of slow - first turn Treetop Village, second turn Vine Dryad, fourth turn Elvish Lyrist. Tsang had a Rishadan Port for the Village and played a Powder Keg. After Tsang played a fourth turn Masticore (with Thwart available to protect it, by the way), all Fuller could do was play the mana cost for a fifth turn Vine Dryad and complain, "These decks just don't like me." Tsang promptly shot the Lyrist and then stole both Vine Dryads with Treacheries. Fuller scooped, saying "I'll save us both some time." Between games, Fuller just shook his head, sarcastically saying, "There's just nothing I can do, this is such a horrible matchup for me." Tsang stayed quiet and brought in three copies of Submerge from his sideboard.

Fuller brought in Rushwood Legates and on his second turn (after Gab played an island), Fuller played both Albino Troll and Rushwood Legate. Tsang played a second land and then after Fuller paid echo for his Troll, Tsang Submerged it back onto the top of Fuller's library. Fuller then played a third land and an Elvish Lyrist, which Tsang stopped with Counterspell. That Submerge stopped a huge amount of damage and totally changed the tempo of this game. Fuller replayed the Troll on his fourth turn and put Rancor on that Legate. Tsang was now facing down 7 power worth of beatdown, but he was at a relatively high 14 life as he started his fourth turn. 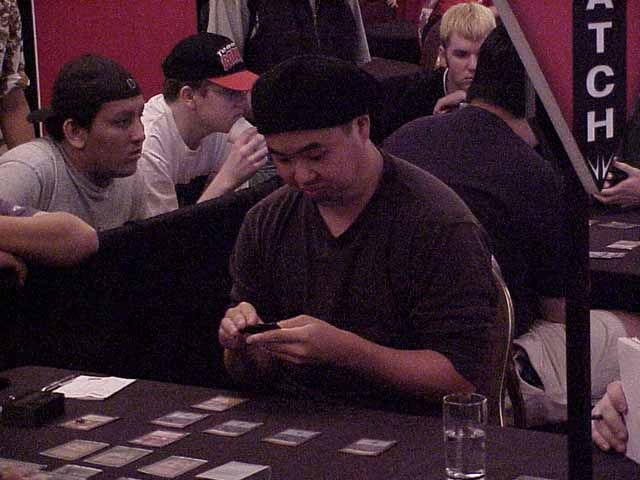 And then Tsang's turn was pretty good too: Grim Monolith, Treachery your Troll, leave my lands untapped so I can untap Monolith. Fuller did nothing, deciding to wait for the Troll go away since Tsang couldn't pay the echo. Tsang did lose that Troll on his upkeep, but once he got to his main phase he played Treachery on the Rancored Legate and then dropped Morphling (with three land untapped)! Fuller just extended his hand and threw the last card from his hand onto the table in disgust.

Fuller's decision to play Stompy looked like a pretty good one given all the monoblue that's at or near the top of the Swiss. (The Sideboard staff is hard at work analyzing everyone's decklists and the results will go up sometime today.) However, in this particular Stompy vs. monoblue matchup, it was the juggernaut who rolled on. Tsang probably only needs a 1-3-1 record from this point to advance to tomorrow's Top 8.