Round 7: Gary Wise vs. Gab Tsang 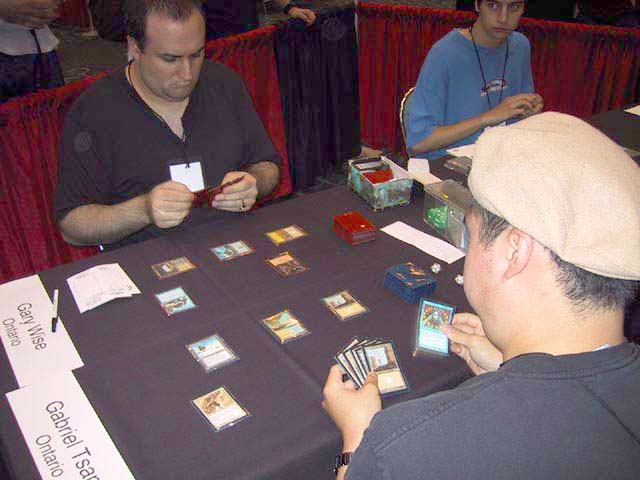 When you think Canadian Magic, the names Gary Wise and Gab Tsang probably come to mind. Combined, they have multiple Pro Tour Top 8s, Worlds Top 8s, and a Pro Tour Championship. Their draft records yesterday were excellent, and they faced off in the first round of the Standard portion of this weekend's event. Both players are running versions of Counter Rebel, with some notable differences. Tsang is using Parallax Wave to clear the way for his attackers, while Wise has Reverent Mantra.

The difference maker in this match may turn out to be Wise's sideboard tech: Unnatural Selection. This enchantment is key, since they can effectively nullify opposing Informers. Additionally, it can allow Wise to destroy Tsang's creatures as long as there are two copies of that specific creature in play. In other matchups, Selection allows Wise to play around Tsabo's Decree.

Gab won the roll, and chose to go first. Both players opened with Coastal Towers, and Defiant Falcon showed up on Gab's side. Gary answered back with Meddling Mage, naming Wrath of God. The Falcon attacked through the air, and Gab played his own Meddling Mage, naming Lin Sivvi. This was incredibly beneficial, since Gab was set to search out the Rebel Legend on his next turn. Playing the Mage on Sivvi ensured that Gary could not hardcast her and get ahead in the Rebel race. Wise did play a Lieutenant, but would have some catching up to do. 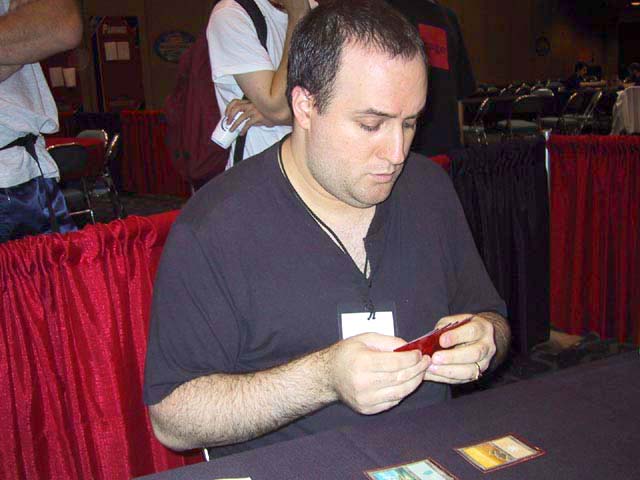 Sure enough, the Falcon searched out Sivvi on Gab's fourth turn. Wise searched out Rebel Informer on Gab's end step, and now had the opportunity to get ahead in the creature race. The fact that Wise had out Meddling Mage on Wrath of God was another issue, as it made escaping the situation more difficult. Tsang searched out his own Informer on end step, but Wise used his Informer to return it to the library before Gab had a chance to untap and use it. Still, Gab took his turn, and searched out the Informer in main phase. He had six mana available, so he was able to return Wise's Informer back into the library right away.

This left Tsang with Rebel Informer, Defiant Falcon, Lin Sivvi and Meddling Mage all out, while Wise had Meddling Mage and Ramosian Lieutenant. With plenty of mana available and access to Lin Sivvi and Informer, Tsang had the pieces in place to dominate the mirror match. As Gab's Informer went to work, it removed all of Wise's Rebels, and Gary promptly conceded.

Gary showed me his sideboarding, which was to bring in Unnatural Selection and Mageta, the Lion for Meddling Mages.

Gary went first this game, but Gab had the advantage with a first turn Sergeant. Wise played Unnatural Selection on turn two. A unique play happened on turn three, as Wise played Caves of Koilos and hardcast Rebel Informer. This was unexpected to say the least, and it gave Wise quite an advantage. Gab's Sergeant searched out a Falcon on end step, and Wise used his Informer on Tsang's end step to return the Falcon back to the library. In response, the Falcon searched out Lin Sivvi.

Wise now untapped, and played his first searcher of the game- Ramosian Sergeant. He then activated the Informer to return Sivvi to Gab's library, leaving only a Sergeant on Tsang's side of the table. However, this left Wise tapped out, making him vulnerable to Wrath of God. Gab used Brainstorm, perhaps looking for a Wrath. However, one didn't show up, and Gab simply played a second Sergeant.

Unnatural Selection was then used to make Wise's Sergeant a Legend. Tsang's active Sergeant also became a Legend, and headed to the graveyard. His Informer continued to go to work, and Tsang was soon left with no creatures on the board. However, he was able to use Wrath of God to reset the board. Gary came right back with a Falcon, which resulted in a counterwar. Wise used Memory Lapse to nullify Gab's Counterspell, which allowed the Falcon to resolve. 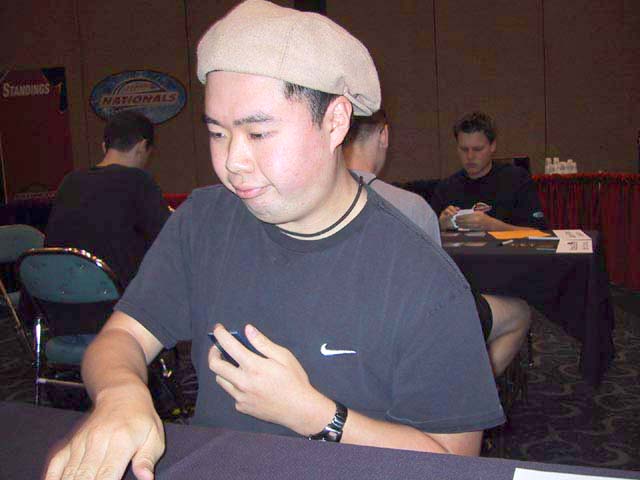 However, Gab answered right back with Mageta, the Lion. The Falcon and Mageta stared across the board at each other for a few turns, until Tsang discarded two plains, and activated the Wrath ability. Mageta then went into the Red Zone, and the clock was on. Wise summoned Ramosian Sergeant, which resolved. Mageta attacked once again for three, and Tsang ended his turn. The Sergeant became active on Wise's turn, and Gad decided not to attack. Wise searched out a Falcon on end step, and took his turn. On end step, Mageta was activated to wipe out Gary's creatures, and Gab discarded two lands.

This left Mageta alone on the battlefield once again, and it attacked for three more damage. Wise played Ramosian Sky Marshal on the following turn, which resulted in a counterwar that Gab won. Mageta attacked yet again, bringing Wise down to six. Gary then took his turn and summoned Lin Sivvi, which resulted in another counterwar that Wise won. Mageta was activated in Gab's end step to take out Sivvi before it became active. This once again cleared the board, which allowed Mageta to attack for the win