Round 7: Gary Wise vs. Mike Turian

Neither of these two teammates wanted to be sitting across from each other right now. Both are 3-3 and need to win to still have a chance to play tomorrow. Gary even went so far as to state, "I hope I lose." Not a bad sentiment considering that Mike recently announced his engagement to Rachel Reynolds after proposing just last week. Congratulations Mike and Rachel! 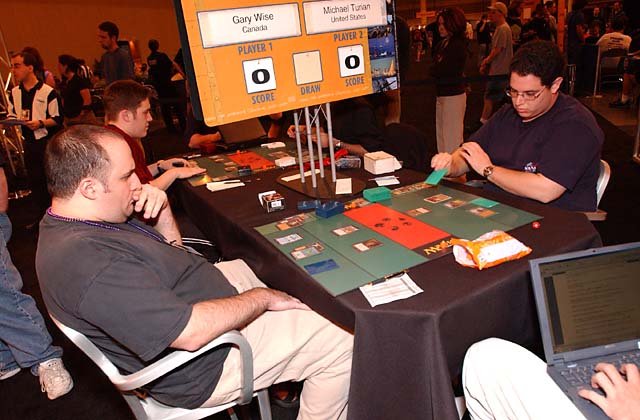 Gary tapped Mike's deck in lieu of shuffling it, while stating, "Probably the only player on the Pro Tour I'd do that with." When asked if they had played before, Mike recalled one time in Japan where Gary had beaten him, adding with a grin, "he topdecked very well."

Gary trumped Mike on the die roll and happily kept a hand of Ancient Tomb, Island, Seat of the Synod, Tinker, Masticore, Thran Dynamo, and Phyrexian Colossus. Turian thought for a while, but decide to mulligan his first hand, which could have played out a turn two Hermit Druid but unfortunately included both Dragon's Breath and Sutured Ghoul.

A land from Gary was followed by a Duress from Turian. He of course selected the Tinker, taking away Gary's planned turn two play. However, Grim Monolith off the top along with Ancient Tomb allowed Gary to play his Masticore instead. Mike untapped his Forsaken City with Worldly Tutor and Duressed Gary off of a Llanowar Wastes, taking the Dynamo. Gary simply untapped, pitched Colossus to the upkeep, and swung for four.

Underground River and a third Duress began Mike's turn, and then he happily Reanimated the Phyrexian Colossus that was conveniently sitting in Gary's graveyard. Not the best creature, since he had no way to untap it, but at least it stemmed the Masticore bleeding.

Then began a short pause for Mike to give his traditionally goofy look in some feature match photos. Gary proceeded to "do the eyebrow" in his. Moving on...

Gary pitched Seat of the Synod, drew, thought. "Go." This time, however, he had Stroke of Genius for four on Mike's end step. He then allowed the Masticore to die, placed down Voltaic Key and Thran Dynamo, then followed up with another "Go".

The atmosphere was friendly but focused. Talking was at a minimum, which seemed unusual for these two. On Gary's end step, Mike tapped Llanowar Wastes and Vampiric Tutored, falling to four. The Colossus then attacked to take Gary to a scant six life. 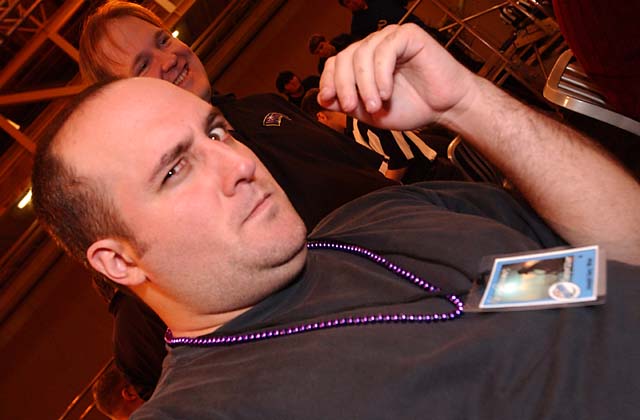 Cabal Therapy missed, but was flashed back to hit Masticore. Both players were out of gas for the moment except for a Krosan Cloudscraper in Turian's hand. But with Gary at six, it was certainly possible that it could go the distance.

Unfortunately, Tinker has a way of drawing into big threats. Gary cast Gilded Lotus and Ported Mike's Forsaken City on his upkeep. Mike had to pass the turn back as he only had two other lands available. Gary drew and then immediately Tinkered a Seat of the Synod away for Myr Incubator.

Gary ported another land, Mike drew his card, and had no choice but to scoop. In reference to Gary's Masticore: "I was hoping you'd let him die so I could Reanimate him too."

Mike took out two Exhume, two Worldly Tutor, and a Mass Hysteria for Krosan Reclamation, an Uktabi Orangutan, two Serenity, and a Meltdown. Gary took out two Upheavals, Mishra's Helix, Phyrexian Colossus, and brought in a lone Chalice of the Void, two Masticores, and Triskelion. Strangely he chose not to bring in Chain of Vapor, which seems like it would be strong against a reanimation-based deck.

Mike started things of by mulliganing an atrocious hand of four lands, Mox Diamond, Dragon's Breath and Krosan Cloudscraper. His second hand was two Cities of Brass, Brushland, Llanowar Wastes, Meltdown, and Duress, and he kept.

Gary, on the draw, kept Seat of the Synod, Rishadan Port, double Metalworker, Upheaval, Masticore. His Upheaval was immediately discarded as Turian led off with Duress.

Gary led with Seat of the Synod, followed by a turn 2 Rishadan Port and then started the pain by tapping down City of Brass. On his third turn Mike ripped Cabal Therapy like a pro and took out both Metalworkers, showing that Gary had drawn Thran Dynamo. Gary eventually played the Dynamo and Mike immediately Meltdowned for four, killing the Dynamo and both of Gary's Seats of the Synod.

Gary played Voltaic Key off the top, while Kai leaned over from the other table and made a comment about Mike's land base (which currently consisted of two Brushland, two City of Brass, and a Llanowar Wastes). Mike responded with, "I'm very afraid of, what's that Red card? Ruination." 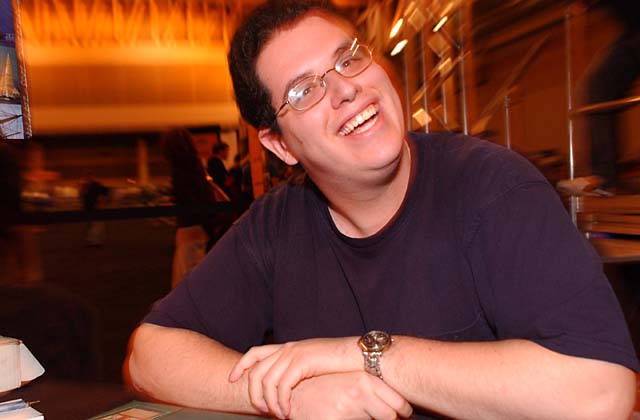 Gary then Tinkered away his Key and debated between Triskelion, Mindslaver, and Gilded Lotus, eventually settling on the former.

Rosewater: "Old school Triskelion!"
Gary: "Bent corner and all."
Rosewater: "Marked cards, is that what you're saying?"

Mike drew and again passed the turn, visibly annoyed with the lack of action that his deck was giving him. With all the damage from his lands, he was running out of time. On end step Gary tapped down a City with his Port, taking Mike to eight. Triskelion attacked and knocked him to four, then the other City was Ported, putting him at three. Gary started sacrificing Triskelion counters, but paused after the last one, with lethal damage on the stack, to think about the possibility of conceding.

While he waited for Gary's decision, Mike proceeded to randomly cast Krosan Reclamation on some of the cards in his graveyard, and set about shuffling his deck.

In the end, Gary chose not to concede, and he advanced to the next round with a chance of making day two.