Siron first popped up on the radar at this year's World Championships as a member of the Belgian National Team. He next appeared in the Top 8 of Pro Tour-Columbus with his Blue-green Madness deck. He has kept a low profile since then but after reeling off six straight wins on Day One he was looking good for a second Sunday appearance this weekend. 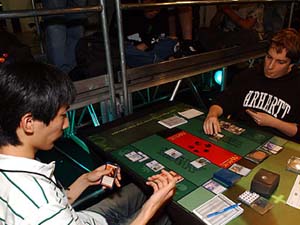 Oiso had many a bomb, and Siron admitted he didn't like his chances.

Had things taken a slightly different turn in Columbus, Siron could have easily faced off with Masashi Oiso in the semifinals - their bracket pushed through Pierre Canali and Olivier Ruel instead. Oiso was an early Player of the Year favorite with several strong Grand Prix - including a win in Boston - to go with his Top 8. He took off Pro Tour-Philadelphia due to school conflicts, although he says he would have found a way to get to Philly had he been aware of the Player's Club.

Siron and Oiso had only squared off one time previous; during the Swiss in Columbus where Oiso was the victor. Oiso seemed embarrassed as Siron recalled the details of his match.

The sheepish grin on Oiso's face indicated that Siron did recall the details correctly. Of course, Oiso could have been grinning about the deck he had just drafted which featured Umezawa's Jitte, Shuriken, plenty of ninjas, abundant removal, and Undying Flames. Siron had no idea what he was facing but he knew enough about his own deck that he didn't like his chances.

"Don't look at my deck it is horrible. I was forced into white-black and I hate it. I opened Nezumi Shortfang and was passed Nagao, Bound by Honor. I had no choice."

Siron's pick came out on turn two but never got to do its thing as he just curved out with Kitsune Blademaster, Kami of the Empty Graves, and Kami of the Painted Road.

Oiso missed his third land drop but recovered a turn later on Soratami Rainshaper.
Oiso weighed his options for a very long time before attacking with the flier and deploying one half of the Brothers Yamazaki. Siron's turn was more straightforward. He sent in his first striker and then followed through on his curve into Kami of the Painted Road. 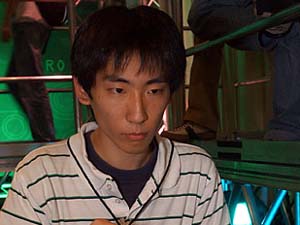 The death stare of Masashi Oiso.

Oiso banged in for two more and then passed the turn with five mana open. Siron was wary and slowed down his pace. He attempted Torii Watchward and gave his Kami protection from red - Oiso responded with Barrel-Down Sokenzan. Brothers traded with Empty Graves.

Oiso tried to slow things down with Freed from Real on the Vigilance creature but Exile into Darkness knocked away a potential blocker. Distress took away Undying Flames and Oiso could find no way out from under the wheels of Siron's cumbersome beatdown.

Siron offered up Kami of Empty Graves up for the Japanese to counter and Oiso obliged. A turn later the Honden hit play and that was more or less the game. Siron uses Exile into Darkness to kill the Rainshaper and removed him from the bin with an attack from the Skullsntacher. Oiso's Soul of Magma was killed with Horobi's Whisper but there was plenty more where that came from with Oiso drawing two cards a turn.

A timely Mistblade Shinobi was enough to upset the delicate balance of Siron's top-heavy draw and they went on to Game 3.

It is always amazing to watch Oiso make his mulligan decisions. He holds his cards out in front on him on the table and practically bores a hole in them going through all the different scenarios. He is not just deciding about whether or not to mulligan, but what will happen if he mulligans, and what will happen if he doesn't. 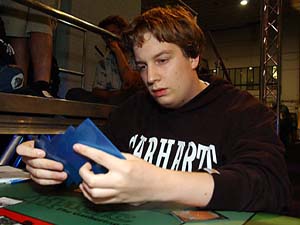 Siron was looking toward a second Top 8 appearance.

After agonizing over his opening seven and finally sending them back, he barely needed a moment to send back the next six (that's what a no-lander will do for you). His five-card hand was remarkably competitive. He traded Akki Underling for a Skullsnatcher and followed with Soratami Rainshaper.

Siron looked to be in good shape with Kuro's Taken and Nagao. Oiso got his ninja on for one turn but Siron used Horobi's Whisper to keep the card advantage to a minimum this game.

Oiso did his best to manage his life with judicious chump blocking as he tried to reach six mana for Undying Flames. He had one turn to pull the sixth land he needed and managed to get it. He aimed the flame at the Kuro's Taken and killed it. Brothers Yamazaki traded with Torii and Nagao dropped Oiso to four.

Oiso aimed the Epic spell at the legend. If he could hit a three-casting cost spell he could possibly climb out. He never got the chance to flip as Siron responded by enchanting Nagao with Blessing of Leeches. Oiso saw the writing on the wall. He could never cast another spell and he could never kill the bombtastic samurai and he scooped as quickly as he sent back the six-card hand.

Final Score
Geoffrey Siron won 2-1 to streak to 7-0 at the end of Day One.