Round 7: Goldmember vs. Phoenix Foundation

Both of these teams are on 5-1. Phoenix Foundation are perhaps the best known team in the world as the winners of the previous pro tour. Goldmember are a Swedish alliance of Morgan Karlson, Rickard Osterberg, and Olle Rade 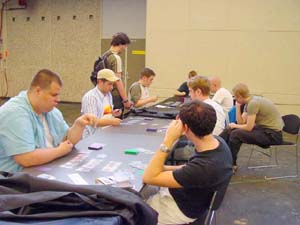 This was a green mirror, Olle splashing black, and Kai splashing red. Both players made a bunch of early green guys, but Kai seemed to have the edge as he had a Wellwisher as one of three elves. He also had a Wirewood Savage which threatened to give him large card advantage. Both players continued to pour large beasts onto the table, but with Kai drawing extra cards his were much more impressive, including a 9/9 Feral Throwback.

Olle put Dragon Shadow on a Krosan Groundshaker, but it only got one hit in before the Throwback provoked it. Olle cast a Havoc Demon, and sacrificed it to his Husk. Symbiotic Elf and Beast gave him six 1/1s to go with the Husk, and Kai was just left with the Throwback. He was, however, on rather a large amount of life. The Throwback traded with three insect tokens pumping the Husk, but Kai wasn't fazed as he still had plenty of gas in his hand. Olle dealt with the Krosan Tusker Budde played, but had no answer to the Centaur Glade.

Game 2 was a complete reversal of fortunes, with Olle winning in short order. He unmorphed a Grinning Demon on turn four, and then gave it a Dragon Shadow on turn 5. Kai's red-green deck had to answer to a seven power fear guy, and Olle had plenty of creatures in reserve to hold off Budde's attack while the Demon got the job done.

A few turns in the third game was rendered irrelevant since both of Kai's teammates had won. They played the game out for pride anyway. After a number of early exchanges the board was cleared by Olle's Havoc Demon. The subsequent turn he dropped a Symbiotic Beast and a Dragon Shadow. Not only that but he had a Slate of Ancestry in play as well, giving him far too much card advantage for Kai to handle. The German wasn't overly bothered about losing since his teammates had already won, giving them the match. 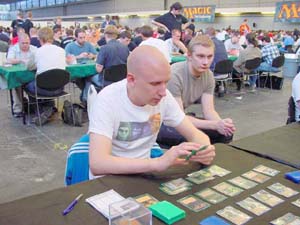 Rickard got a great start, with a Lightning Rift and then a Lavamancer's skill on a wizard gunning down Dirk's whole team. Dirk got back into the game in a big way with a Cruel Revival, killing the skilled Wizard, bringing back Rotlung Reanimator. He then Cloned the Reanimator and started to swing in, posing some stiff questions for Rickard. Not only did he have two Rotlungs to contend with, but Dirk turned up the heat with an Aven Fateshaper. Rickard had a couple of turns to find a solution, but didn't have enough land to put up a fight, despite having cycled a number of cards to find it.

Once again Rickard had the early Lighting Rift, but his creatures were significantly smaller than Dirks. He had a Morph and a Mistform Dreamer, and Dirk had Soul Collector and Embalmed Brawler. This time Rickard had plenty of lands and managed to clear the board with a couple of cycling cards, a Skirk Marauder and a Pinpoint Avalanche.

Dirk got to seven mana and dropped his Aven Fateshaper, then Nantuko Husk and Rotlung Reanimator. Dirk also had a Shoreline Raider. This gave him two beefy flyers, and Rickard's only flyer was a Mistform Seaswift. He had some quality morphs, an Echo Tracer and a Willbender, but simply didn't draw anything to deal with the flyers. After a number of attacks, Rickard was forced to admit defeat. 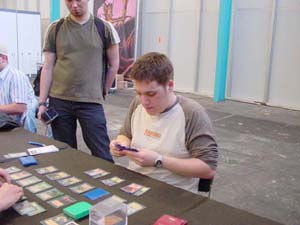 This was a white mirror match up which unfortunately I was rather too far away to see – the feature match table was fairly long and I was stuck at one end of it. "If Rob Dougherty was here you could borrow his binoculars," joked John Larkin, referring to the YMG players interesting scouting technique at PT Venice. From what I could make out, Marco had the advantage of having Catapult Squad in play, which made his Aven Redeemer pretty much unblockable.

It was the Catapult Squad that decided the game, since although both players had plenty of creatures, Morgan could never make any sensible blocks. Eventually Dirk started attacking with a Daru Lancer as well, and Morgan was reduced to chumping with creatures that died to the squad. He drew nothing that could stop the squad dominating the board, and had to scoop.

Game 2 was more of the same, as both players got a quantity of Soldiers into play. Marco had a couple of provoke men, but neither player had a Stinger or Catapult Squad in play, so the game was rather more sedate than the previous one. However, it soon became apparent that Morgan had nothing but lands in hand, and Marco gradually became more aggressive in his attacks once he sensed that Morgan didn't have a trick. Morgan only drew more lands and a Reaping the Graves, but all the guys in his graveyard were fairly inconsequential anyway.