"So your deck is the nuts," said Conley Woods as his opponent for Round 7 sat down.

"I don't know that I would go that far. I definitely received some late gifts," replied Andrew Cuneo.

The pair of undefeated players bantered back and forth about how the draft went and the ridiculous number of Reckless Waifs – four – that were opened. Transform cards give players a bunch of extra information. 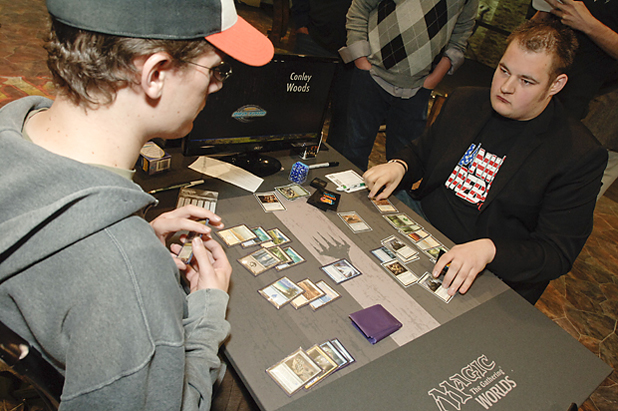 Conley Woods banters with Andrew Cuneo about their draft. Will he get any info on what Cuneo is playing?

"I'm giving you all this free information," Cuneo said, shifting the topic off to Legacy and Standard. Woods gave Cuneo a bit of a look like his friendly banter had been found out, his hand in the proverbial free information cookie jar.

Woods' banter had served him well so far, as both he and Cuneo had made it through the first six rounds unscathed. A strong draft here would set up one or both of them for runs at the Top 8.

In what would become a pattern, Woods was first on the board with an Avacynian Priest, one of the four he had drafted. He followed it up with a Galvanic Juggernaut, looking to put a quick hurting on his also undefeated opponent.

But Cuneo hadn't made it this far just to sit back and roll over. He landed a Human haymaker in Geist of Saint Traft and a Moon Heron.

The Heron died to Prey Upon, which also conveniently untapped the Juggernaut after it had attacked. Cuneo had no follow up and, with five mana untapped, simply shipped the turn back to Conley and his Juggernaut.

Till this point, the players had played lightning fast, but five untapped mana and a pass from Cuneo gave Woods some pause. He wondered aloud about a potential Lost in Mist, which could have been devastating, but opted to play another Priest and suit it up with a Bonds of Faith anyway.

That Priest quickly became Claustrophobic, allowing the Geist to finally attack in, dropping Woods to 14.

Dissipate countered a second Bonds of Faith on the first Priest, and Geist got in again, taking Woods to 8. He then landed a Moon Heron, threatening seven in the air plus the Geist of Saint Traft.

Here's where things got tricky.

Cuneo untapped with Moon Heron and Geist in play versus Conley's lone Priest and tapped Juggernaut. Cueno attacked with both as Conley declined to tap the Heron. Ranger's Guile let the Priest kill the Geist and live to tell the tale. When the dust settled, Woods fell to one but suddenly had an untapped Juggernaut and a tapper against Cuneo's lone Heron.

The Galvanic Juggernaut got in again, taking Cuneo to 3, or just out of range of the Chapel Geist Woods had as his follow-up.

Cuneo again had no plays on his turn as the Priest continued to lock down the Heron, giving Woods the faint sense of a trick.

Now, with Cuneo at 3, Woods paused to decide if he should go for the kill by attacking with his Priest and Chapel Geist, or play conservatively and hold one back to try and win later. Any trick that could stave off one of the creatures would be lethal for Woods, as he wasn't holding anything useful. 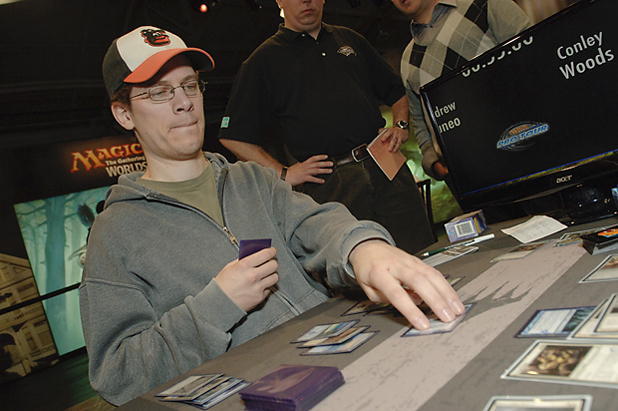 Andrew Cuneo just needed one trick to take the first game from Woods, but the goods just never came.

Again, Woods paused. Any number of cards could lead to a loss if he attacked, but he chose to get in with Chapel Geist, and dropped Cuneo to 1.

Cuneo, simply passed back. Finally, Woods attacked for the last point with the Chapel Geist.

"There were so many cards you could have had. Village Bell-Ringer, Victim of Night, Rebuke," Conley wondered aloud. This time, Cuneo refused to give any free information.

Woods' mulligan to 6 cards likely doomed him, as – spoiler alert – Woods never found a Forest. Well, he did, but we'll get to that.

That doesn't mean he made it easy.

Woods was again first on the board, this time with a troublesome Spectral Rider followed by an Avacynian Priest.

Cuneo, meanwhile, girded for battle with Civilized Scholar and then a Selhoff Occultist, all the while getting Spectral Rider-sized chunks taken out of his life total. The priest even got in on some attacking action since it wasn't tapping any of Cuneo's humans anyway.

A Village Bell-Ringer stopped the next Occultist attack, but the two humans simply bounced off each other. Instead, Cuneo took to the air with a Battleground Geist.

Even with only white mana in play, Woods was putting on the pressure. A Galvanic Juggernaut could have made life difficult, but Smite the Monstrous made short work of the 5/5 and a Claustrophobia, finally, shut down the Rider. With that, Woods' momentum was halted.

Woods had some removal of his own, as Bonds of Faith took care of Battleground Geist. Cuneo simply reloaded his air force with an Unburial Rites on a Stitched Drake and set Woods back a turn with a flashed back Grasp of Phantasms.

Every time it seemed like Cuneo was about to run away with it, Woods made life difficult, this time with yet another Village Bell-Ringer to untap the Rider and let it get in for two more cheeky points. The following turn, however, it traded with a Geist of Saint Traft.

This is where Cuneo dropped his late-game haymaker. Back from the Brink allowed him to make a Geist of Saint Traft token. Only, no such token exists outside the wonderful world of Magic Online.

Enter Aaron Forsythe to the rescue with a handy piece of oversized notebook paper to represent the mythic rare Human. 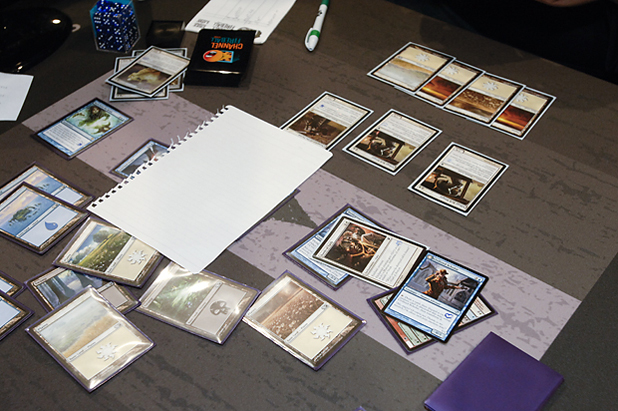 This is what a Geist of Saint Traft token looks like when Aaron Fosythe provides the tokens.

"What a curious situation. No one ever beats paper. Rock doesn't beat paper," Woods said as he played a Gallows Warden.

Cuneo attacked with the team next turn, putting a very large campus notebook into play as a 4/4 flying angel token. The Occultist mills put a Morkrut Banshee into the graveyard to be resurrected by Back from the Brink, which was enough to earn the scoop.

To add insult to injury, the Occultist's final trigger off the Banshee targeted Woods for the first time in the game. The card binned?

With the long game favoring Cuneo and the short game seemingly favoring Woods, the well-dressed Conley Woods was happy to play first for the penultimate game.

Woods again had the first play with an Avacynian Priest, followed by a Mausoleum Guard. Once again he was on the mono-white plan, though thing were going considerably more his way.

Cuneo had a Moon Heron, which he refused to trade for the Mausoleum Guard. Woods, finally with a Forest, cast a Villagers of Estwald and followed it up with a Darthicket Wolf, creating a rather imposing army to face down Cuneo's dual Moon Herons.

The Priest tapped a Heron offensively, and Woods attacked for 6 before casting a Galvanic Juggernaut that died immediately to Smite the Monstrous. Still, Cuneo sat at only 8 life with a number of difficult to handle creatures in play.

Claustrophobia on the Priest kept the tapper in check, but that didn't stop Woods from attacking with the Mausoleum Guard and Darkthicket Wolf. The Wolf traded for both Moon Herons and the Guard put Cuneo to 6.

At a precarious life total, it seemed that every time Cuneo was about to turn the game back in his favor, Woods found an answer or a way to break through.

When Cuneo made a Stitched Drake and an Occultist, Woods had Naturalize for the Claustrophobia on his tapper.

When the ground became clogged, Woods attacked with the Mausoleum Guard and turned it into two flying tokens. 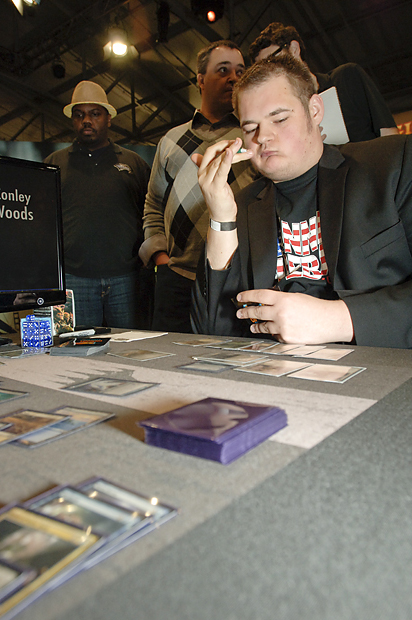 Nothing beats Paper, except Conley Woods.

When Sensory Deprivation shut down one of the 1/1 flying spirits, Woods had a second Naturalize.

When Stitched Drake threatened to block the 1/1s, Woods simply tapped it.

And when another Claustrophobia threatened to take out the tapper and let Cuneo stabilize, Woods had a timely Village Bell-Ringer to allow his Claustrophobic Priest to push through the last damage, which put Woods at 7-0.