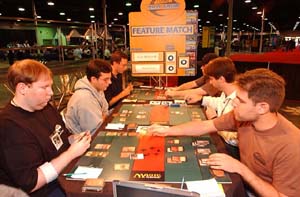 In this draft Attack Time followed the metagame strategy of placing Green/Red into the A seat as it has been found to have strong matchups against Black decks in this format. Mandel leads with a Swamp that is matched by a Mountain, Dwarven Grunt opening from Linnemann. This is followed by the addition of Millikin on Linnemann's side and then Mandel simply playing his third swamp and passing the turn.

Linnemann then activates the Millikin, which dumps Phantom Centaur in the graveyard, resulting in a visible celebration from Mandel. With that mana plus his two lands he plays out Narcissism, but then ends his turn without laying a third land. Mandel, seeing his opportunity, puts down his fourth straight swamp and Butchers the Millikin. Linnemann attacks with the Grunt to put Mandel to 17, adds a third land, and plays Barbarian Lunatic...so Mandel figures he might as well Faceless Butcher that too, while attacking Linnemann to 18.

Dwarven Grunt is the recipient of a Reckless Charge, bringing Mandel to 13, and then is Lava Darted resulting in a Narcissism pump pitching Anurid Brushhopper. The Butcher team attacks Linnemann down to 14 and he wisely decides to leave it back on defense for the moment, as it is not a winnable race. Meanwhile Mandel casts a Mental Note, flipping over Earsplitting Rats, which is then Morgue Thefted and dropped into play. Lindemann lays his fifth land and adds Barbarian Bully to the board, leaving two forests open. Over the next couple turns the Bully becomes Lost in Thought, the Dwarven Grunt is hit by an Ember Shot and heads to the graveyard, and Mandel casts a Zombie Assassin which receives both ends of a Lava Dart.

Mandel then adds Psychatog and Crypt Creeper to the board, leading Lindemann to wryly remark, "Now I've gotta start playing constructed over here", in reference to his opponent's board of double Butcher, Psychatog, Crypt Creeper. Mandel swings with the Creeper and takes Lindemann to 12 then Morgue Thefts Zombie Assassin and replays it. Next turn he swings with Crypt Creeper and the Earsplitting Rats, again into the Lost in Thought'd Bully, and Lindemann takes it again, falling to 8. Lindemann then draws his card for his turn and threw a bunch of lands down on the table in disgust, conceding the game.

Mandel: "I'm all playing around all matter of...Rootwalla, everything. If you would've told me that I would've killed you four turns ago."

Traditionally this is a bad matchup for Guevin, as he is running his Green/Red deck into the waiting jaws of White/Blue. He chooses to play first and leads with Ironshell Beetle, Arcane Teachings. Cowley starts his curve with Trained Pronghorn followed by Vigilant Sentry and then uses Ghostly Wings to bounce the annoying Beetle. Guevin then plays Druid Lyrist and enhances it with the Ironshell Beetle. Cowley calmly puts his Pronghorn under a Wormfang Drake, and then puts Psionic Gift on the Drake, killing the Beetle. Next turn a Floating Shield set to green is put on the Vigilant Sentry and the Drake begins attacking. He also enchants a newly cast Brawn with Cagemail.

Guevin sacrifices the Lyrist to remove Floating Shield on end step and then hits the Wormfang Drake with a devastating Venemous Vines. Then both players begin playing out creatures, with the Selfless Exorcist on Cowley's side pretty much ruling the ground, and the only flying creature being a Skying Aven that was also on Cowley's team. This one only took a few attack phases to resolve itself.

Cowley, running Green/Black, curves up with Boneshard Slasher, Ironshell Beetle, and Brawn while Guevin matches him with Aquamoeba, Nomad Mythmaker, Teroh's Faithful. Eventually Cowley keeps adding more creatures in the form of Dirty Wererat, Crypt Creeper and Dreamwinder, but all Guevin can muster is Hapless Researcher. A number of creatures attack from Cowley's side, resulting in a number of trades, but he keeps on the pressure with Treacherous Werewolf and Basking Rootwalla. The defense only receives reinforcements in the form of an Aven Fogbringer, and soon the attacks prove to be too much and Guevin folds in the first game.

Lindemann took a look at the opening seven and decided to send it back.

Mandel: "That's what I said from the beginning...I was gonna draw both both Butchers and my opponent was gonna mana-stall."

Lindemann begins with a turn 3 Phantom Tiger that is met with Crippling Fatigue. Mandel follows it up with a Barbarian Bully but Lindemann returns the favor with Anurid Brushhopper. Mandel brings down the turn five Carrion Wurm and suddenly Lindemann is in a bit of trouble, but it only gets worse when next turn a Lost in Thought is resolved on the Brushhopper and Mandel attacks Lindemann down to 12. Lindemann digs for an answer with a cycled Sudden Strength at end of turn but can only come up with Earth Rift for the one mountain that Mandel has on the table. 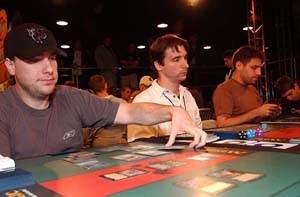 Mandel attacks with both creatures and Lindemann removes his graveyard to allow his Brushhopper to block the Barbarian Bully. Mandel activates the Bully, randomly pitching Island, which results in Lindemann paying four life down to 8 so that the Bully will die. The Carrion Wurm then brings Lindemann down to the precarious life total of 2. Mandel Morgue Thefts back the Bully and brings it into play. Lindemann flips the Hopper during Mandel's second main phase, with the Lost In Thought falling off. He untaps and plays Narcissism with a Forest untapped and two cards in the graveyard.

Mandel flashes back Fatigue on the Brushhopper and swings then activates the Barbarian Bully, forcing Lindemann to both remove his graveyard to survive the Wurm and flip the Brushhopper again with his last two cards in hand. From there on it was elementary for Mandel to untap and attack for the win.

Guevin has a strong start in this one as he goes turn two Harvester Druid, turn three Centaur Chieftain (attack for three), turn four double Nantuko Tracer (attack for four). Cowley's only plays so far have been Cephalid Looter and Psionic Gift, so it's not surprising that when Guevin flashes the Venemous Vines the game is about to be over. Cowley taps out to play Balshan Griffin but Guevin performs the lethal attack.

Guevin and Cowley are tied at one apiece.

Again both players begin with a steady stream of creatures. This time it is Crypt Creeper and Nullmage Advocate on Cowley's side facing down Nomad Mythmaker and Teroh's Faithful on Guevin's side. A Mesmeric Fiend from Cowley steals Hydromorph Gull and a Forcemage Advocate threatens to make life difficult for Guevin. Cowley then Stalkers the Faithful, Edicts away the Mythmaker and swings for a good chunk of Guevin's life total.

Guevin finds Phantom Nomad and Wonder as blockers but seems to be rather land flooded. Cowley attacks with Nullmage Advocate, which is double blocked, so Wonder heads to the grave and the Nomad loses a counter. Guevin adds Aven Flock to the board and Cowley adds Dreamwinder and Dirty Wererat, and then swings with those two. Next turn he swings with those two plus a 3/3 Treacherous Werewolf that has a counter from the Forcemage Advocate. Cowley pitches cards and sacrifices Islands until he has threshold, which prompts Guevin to Chastise the now 5/5 Werewolf.

Cowley then plays Wormfang Crab, which Guevin directs to eat the Slithery Stalker, giving him back the Teroh's Faithful and raising his life total to a slightly more comfortable level. The Crab then becomes 4/7, and then 5/8, and swings, then Cowley flashes back the Edict taking care of the Faithful and leaving only the Aven Flock. Next turn the Wererat becomes 5/6 and swings alongside the Crab, sealing the game.

Both players start with one drops as Druid Lyrist stares down Hapless Researcher for a couple turns. Brawn from Guevin is then met with Aven Windreader from Cowley. The Brawn receives a Crackling Club and swings for 4, then Guevin plays Acorn Harvest. Cowley passes the turn, keeping the flier on defense with a hand of Vengeful Dreams, Prismatic Strands, Obsessive Search, plus a land. Guevin attacks with just the squirrels, prompting Cowley to block both of them. Hapless Researcher is sacrificed and in response to the Obsessive Search Guevin Flame Bursts the Windreader. Cowley casts a Strands on red but Flaring Pain says no to that and the Windreader dies. 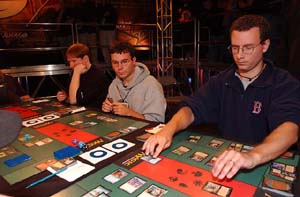 Cowley then taps out to play Balshan Griffin. Guevin sends with the Lyrist for a point and flashes back the Harvest, leaving the life totals at 17 to 15. Cowley plays Skywing Aven leaving up WW, but Guevin only attacks with the squirrels and the Lyrist. Cowley declares no blocks and takes the three. Cowley draws another land and now has four in his hand, so he passes the turn but Guevin casts Beast Attack on end step. The 1/1s send again and Skywing Aven blocks the Lyrist with the Griffin blocking a squirrel. Skywing Aven returns to the hand and then the Club is sacrificed to finish the Griffin, which also retreats back to Cowley's hand.

Cowley simply replays Skywing Aven on his turn and Guevin flashes back the Beast Attack. He attacks with a squirrel and a beast so Cowley takes five and goes to 6. Guevin plays Arcane Teachings on the Nullmage with 30 seconds left on the time clock. Cowley plays Balshan Griffin and passes the turn, with Skywing Aven dying to the Teachings. Vengeful Dreams steps in to remove the beast and the squirrel and Cowley plays Pronghorn with an empty hand, but it too dies to the Teachings. Guevin then quickly does the match and swings with the entire team for the win.

Guevin: "You gotta show discipline. There's no discipline in Magic today. You have to play around the Vengeful Dreams."

"This card is amazing in our match (Flaring Pain). You guys should have counterdrafted it...you guys outdrafted us other than that."