Round 7: Greg Swan vs. Russell Yakupov 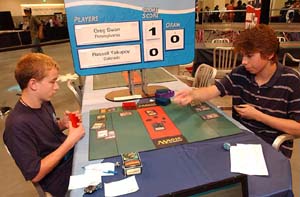 Greg Swan made the trip here from lower Pennsylvania, near Philly. He's been playing for eight years, more than half his life. He qualified through a JSS Challenge that "No one attended," he said. "There were about 23 players or so."

Russell Yakupov made the trip here from Denver on a plane with some friends. He qualified for this event through a JSS Challenge in Colorado Springs. He's been playing for about three years now. "Maybe four though," he remarked. "I started with Urza's Saga, but that wasn't for competitive Magic."

"It's a keeper," Russell announced with his opening hand. "Let's see what it is," he remarked as he cast Duress. Greg appears to be playing Aqualube from his opening hand, but only time will tell.

Russell threw a Withered Wretch and a Nantuko Shade onto the table, and starts swinging with them both. His creatures ran into a Moment's Peace party from Greg though, and no damage was dealt.

"Wake," comes the announcement from Greg. The Wake hits the table, and during his next turn Russell casts Duress. The Duress takes a Wrath of God from Greg, but it leaves him with one in his hand still, as well as an Exalted Angel, Deep Analysis and a Renewed Faith.

"You drew a Counter," Russell asked. Incredulous at his opponent's luck he simply tapped two more lands and cast a second Chainer's Edict. The double Edict did finally kill the Exalted Angel. With his own creature off the table Greg decided it was time to cast the Wrath of God he was holding. Russell picked up his Withered Wretch and Nantuko Shade and moved them to the graveyard.

Well, he moved those two there. On his following turn he cast a Withered Wretch, and you guessed it, a Nantuko Shade. The Wrath of God bought him a turn though. Now with Mirari and the Wake on the table it looked like he could claw his way back into this game. 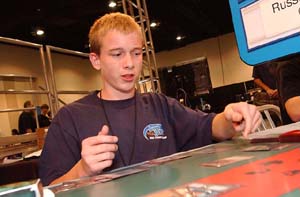 Russell agonized over the attack phase. "I'll declare an attack," he finally decided. Pushing the Wretch and the Shade into the Red Zone he was relieved to find that his opponent didn't have any way of preventing the damage. Pumping the shade all the way to 6/5 and adding the damage from the Wretch he brought Greg down to two life. Moments later Greg mana burned for one, oh that silly Wake math, and went down to one life.

Greg put an Exalted Angel on the table and Russell had no way to get it off. His Graveborn Muse that he did draw provided very little in the way of immediate help. Greg felt comfortable enough with his board position that he even flashed back a Deep Analysis, sending his life total to only three, before taking another mana burn to drop to two life.

Russell looked at his hand for a long time following the attack phase, where his Muse was unable to break through the Moment's Peace barricade again. "Corrupt you," he announced. The Corrupt was met with a Cunning Wish, sent through Mirari for twice the fun. Greg grabbed a Counterspell and a Cunning Wish and countered the Corrupt.

Unable to do anything to change the outcome of this game Russell packed up his cards, "I'll concede," he said as he picked up his Swamps.

"You kind of stalled on three land there," Greg mentioned during the shuffling period between the games.

"If I had drawn the fourth land earlier that would have been better for me," Russell commented.

"Yeah, then you could have played that Muse before I Wrathed," quipped Greg.

The banter continued back and forth as Russell three pile shuffled Greg's deck. "Sixty cards," he commented. "That's a good way to go at these things."

"You have 61," Greg remarked back at him. "No I don't," came the quick response from Russell.

The two players did finally get done messing with their card piles and start a game of Magic. Unhappy with his first seven cards though Russell pulled out the Paris Mulligan and drew six new cards. The mid game approached quickly, and neither player had really accomplished much. Greg did finally get the party started though, tapping out to play Mirari's Wake. Russell seemed happy with that decision though, as he was able to get a Nantuko Shade, Withered Wretch and Rotlung Reanimator all on the table without any counter interference.

Greg spent a brief moment contemplating the army of creatures that stared at him now. He decided it was time for a little support. Exalted Angel joined his side of the table. A turn later though the Angel left. Greg cast a Wrath of God, despite the presence of the Rotlung Reanimator. Russell would lose his Rotlung, his Wretch and his Shade in the attack, but he did get to replace them with two Zombie tokens.

A second Wrath of God moments later did kill the Zombies, and Russell decided it was time to take action. The Unholy Grotto put the Graveborn Muse on top of the library, and Russell appeared confident. Greg only had two cards in his hand and three lands untapped, leaving little that could be done.

Well, except for the Counterspell he was holding. Greg cast the Memory Lapse on the Graveborn Muse, sending it back to the top of the library. Russell was okay with the loss of the Muse, it provided him an opportunity to cast Guiltfeeder. The Guiltfeeder set Russell up nicely to end this game, all he had to do was keep him on the table. A turn later he cast Cabal Therapy, getting a Chastise and leaving Greg with a single copy of Wrath of God.

"How much time is left," Greg asked. When he heard the response from the judge, only eleven minutes, he scooped. Wake needs a little bit of time to win, and both of these players needed a win to strengthen their shot at playing tomorrow.

Both players were more subdued shuffling up for Game 3. The need to win has made many of the kids in this event seem more business-like then their counterparts over in the Nationals arena.

"Therapy works," Greg quipped during the shuffling. "If you had drawn Duress I would have been fine with that." The Therapy did rip two cards out of Greg's hand last game, and that gave the game to Russell. The game started out quickly, Russell led with Duress, taking a Counterspell from Greg and revealing Wrath, Wake and other goodies. Greg got through the early discard from Russell in pretty good shape. Turn five rolled around the Greg put a Mirari's Wake on the table, again tapping out to do so. Turn six he added a copy of Mirari to the table.

With only three lands Russell looked unhappy. Greg had six lands on the table, as well as Mirari, the Wake and Exalted Angel. Russell did manage to Edict the Exalted Angel off the table, using his second Edict on that same Angel, before he made the questionable decision to cast Braids. With only four permanents on the table compared to the nine from Greg people wondered why he would take the risk of Braids. 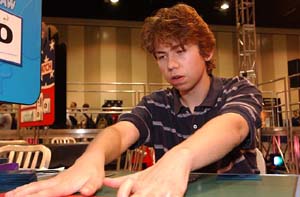 The counter party continued on Greg's side, even as time was called Russell was still trying to force through a Cabal Therapy. The Therapy did finally resolve, nabbing a Cunning Wish from Greg.

Turn one went over to Greg, who was staring at a table where he had no win conditions and a hand where he had no Cunning Wish. It seemed that while he could not lose this game, he also could not win this game. He sent Deep Analysis out of the yard into flashbackland and copied it with Mirari. The four cards he drew must have looked good, because he turned Russell down when Russell asked him if he wanted to save some time and draw. "No, no," Greg muttered, intently riffling his cards around his hands. After rearranging his lands a little he went to his end step, discarding four cards.

Russell flew through turn two, picking up his card, casting Nantuko Shade and attempting to pass the turn back to Greg. Greg interrupts him with, "At the end of your turn," and casts a spell. "Flash of Insight for nine through Mirari." Greg picks up nine cards, puts one in his hand, then does it a second time. It seemed like he was happy, as if the eighteen cards he had just seen gave him some kind of advantage.

Well, of course it did! Greg flashed back the Flash of Insight, this time choosing to look at five cards and sending it through Mirari again. He put two of the next ten cards into his hand, hoping it might help a little while he dug for a way to win this game. "How are you planning to win this game?" Russell asked. "You only are running three Wishes."

"Let's just call it a draw," Greg offered. "I must have boarded out an Angel." Apparently his plan was to try and find three Angels and then attack with them on turn five.

"Good plan," was all Russell could offer Greg.