Round 7:
Hold Me Close, Electromancer

As Denniz Rachid sat down for his match against Reid Duke, he felt compelled to ask about how Duke's most auspicious team mate was doing.

While Finkel's run in 2012 has been pretty amazing, Rachid has had a similarly impressive run, with a 2012 win percentage of over 70% and a pair of Top 8 finishes himself. Paired up against Reid Duke, he wouldn't have an easy matchup. Duke has a pretty solid win percentage himself, and it would have been all the better but for a rocky run of things at the Magic Players Championship earlier in the year. There are only four players in the room who have a longer winning streak than Reid in premier play, but equally he has the longest losing streak of anyone playing at Pro Tour Return to Ravnica (at the Players Championship).

Rachid was on the play, but had a mulligan which would hamper him slightly. A Rakdos Shred-Freak got to hit once before trading with Duke's Goblin Electromancer. From there, things went south for Rachid, who could not get past two lands. The same could not be said of Duke, who got up to five lands without incident, casting Runewing along the way, and a Thoughtflare at the end of Rachid's turn before he had to discard. 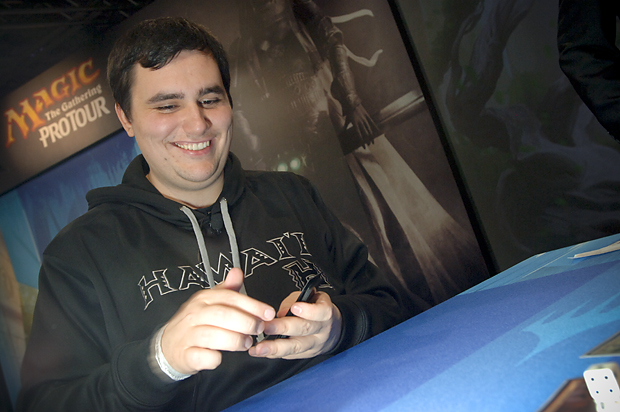 Vassal Soul and an unleashed Gore-House Chainwalker made game one a very fast game indeed.

Duke seemed pretty happy to be flying the flag of Izzet. Both his Constructed deck and his draft deck today sported four copies of Goblin Electromancer, which had done good work for him in Storm, and continued to perform in draft. He was confident that he was one of two blue drafters at his table, and having beaten one of them last round, that he would be in a good spot for his table.

It was Duke's turn to mulligan for the second game, while Rachid kept his hand. Knowing that he was up against Rakdos likely played on Duke's mind. Speculative hands look a lot worse when you know there is the potential to be facing down a very aggressive draw from your opponent. 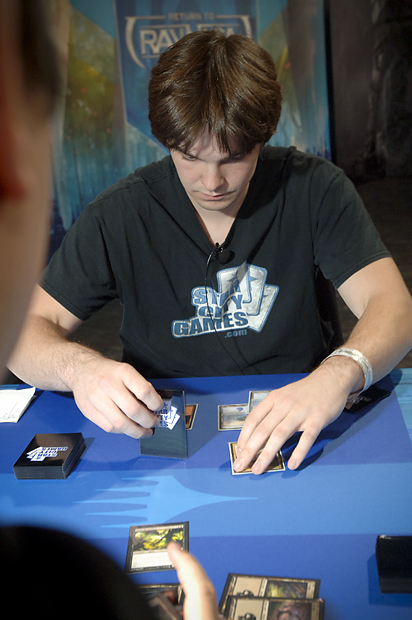 Goblin Electromancer was the first play of the game, as it seemed that this game Rachid had lands and little else. It was joined by a second, while the first play from Rachid was a Dark Revenant. Duke soon attacked Rachid down to 14, and passed with four mana up. He had a Thoughtflare in response to Spawn of Rix Maadi, neatly drawing him out of his mulligan, but did not have a way to stop the five cost creature. Ash Zealot kept up Duke's offence, and when the Spawn of Rix Maadi blocked a Golbin Electromancer, it left the 5/3 vulnerable to an Izzet Staticaster coming down to deal the final point.

Rachid was on the back foot. Half his life was gone, and he needed to either make an impressive blocker, or start racing. A Pursuit of Flight on his Dark Revenant meant that the race wasn't an impossible dream, with Stab Wound to off Duke's Electromancer. The life totals stood at 8 to 14 in Duke's favor after his attacks. Worse for Rachid, Duke had a legitimate bomb in Mercurial Chemister, which would take over the game fast given the opportunity.

Rachid had to go for it, and attacked Duke to 10 before playing Dead Reveler. Racing was his best option, and he did have more damage on the board. Mercurial Chemister had other plans. He threw a Thoughtflare at the Dark Revenant, dramatically reducing Rachid's attacking power. A Doorkeeper and Goblin Electromancer for Duke also meant that attacks wouldn't work.

Rachid looked at his hand. There wasn't anything to get him out of the position he was in, and he could only re-draw his Revenant. The only use for his hand at this point was to shake Duke's in congratulations.