Round 7: "I Have Nineteen First Picks!"

Straight outta Draft Viewer 1 (not as catchy as "Compton," I admit), these two 6-0ers sat down quickly and shuffled up. After winning the die roll, Patrick Chapin, his usual boisterous self, talked into the Czech Republic's Petr Brozek with reckless abandon. Brozek smiled, nodded, and answered cordially, but Chapin was unfazed.

The match began with two blazing keeps and fast plays from both players as they set their boards up for the ensuring battle. Brozek's Leaden Myr was Steel Sabotaged, but he followed with a Brass Squire and a Flensermite. Chapin started the synergy quickly with Ferrovore and Ichor Wellspring (combo!). He then sunk Brozek to 18 but declined to sacrifice the Wellspring so Argent Sphinx could come down on turn four (like a pro). Flensermite unflinchly walked into the blue flyer, which soon received a second -1/-1 counter when a Brozek's Core Prowler met Chapin's Galvanic Blast. 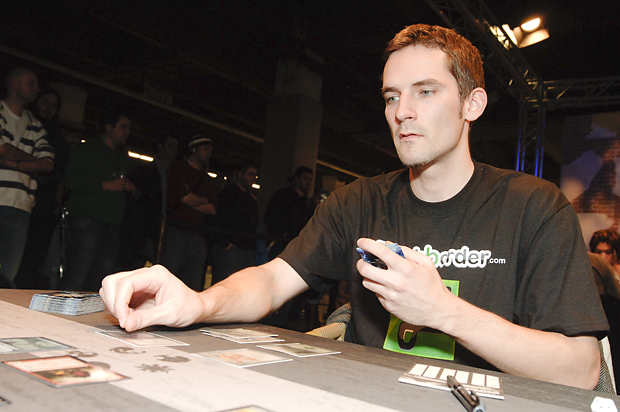 More Blue-Red counter-burn from Chapin when Stoic Rebuttal stopped a Blight Mamba in its tracks. The Sphinx plus the 'vore (and Wellspring sacrifice) made the total 8-20 in Chapin's favor. And just as things were starting to look up for Brozek with a Corpse Cur returning the Mamba, Chapin showed even more gas with Burn the Impure on the imperfect Cur (oh that phrase scans well, doesn't it?) and a Myr Sire for double-Ferrovore sacrifice powers (that one doesn't).

A turn later the Blisterstick Shaman ended things mercifully for Brozek and we were on to Game 2.

While shuffling for the second game, Chapin looked around the Café Noir feature-match set piece and noticed that there was yet no green planeswalker in Scars of Mirrodin block. "Oh man, I just realized Garruk's going to come and save the day in the third set!"

"But save the day for whom?" I asked.

"For Mirrodin, of course! Garruk will never be corrupted, never."

Brozek had to redundantly go to Paris, but kept his six-card hand. He started strongly with a Plague Stinger, equipped a Viridian Claw, and then added a Core Prowler. Chapin went Ichor Wellspring, Oculus, Argent Sphinx (turn four, like a pro, again), then went to five poison counters when his Oxidda Scrapmelter took down the Core Prowler. Brozek quickly replaced the Prowler with Septic Rats, but Chapin, unflummoxed, cast the Blisterstick Shaman and took down the Brozel's Plague Stinger, bringing up a Ferrovore closely behind. 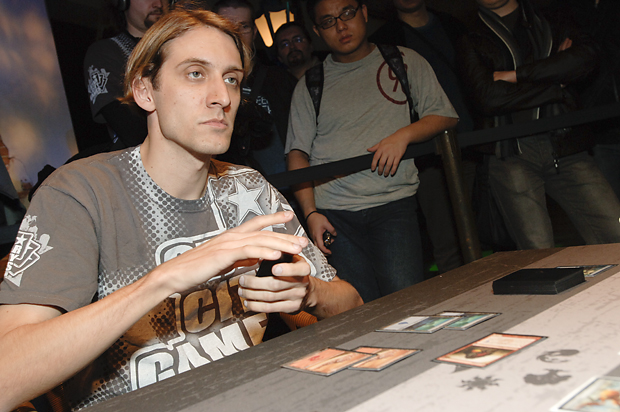 Brozek's Carrion Call might be good in some games, but here it just seemed so sad, because Chapin answered with a turn-seven Spine of Ish Sah (still pro-like), Spining the Septic Rats, leaving his opponent with two small tokens. The game became sadder when Corrupted Conscience stole Brozek's newly cast (and equipped) Plaguemaw Beast, while Chapin sunk Brozek to 5. The Czech tried to endure. He frowned, nodded, untapped, cast Blackcleave Goblin and passed the turn. But when the Ferrovore / Spine of Ish Sah recursion engine kicked into full swing, Brozek had to admit defeat.

While Chapin de-sideboarded and chatted with me about the match, saying things like "I have nineteen first picks," Judge Rob Johnson sauntered up and said, "Chapin, I hate to say it, but Garruk's already corrupted." It's true; he was cursed by Liliana and was last seen making zombie beasts.

"Well yeah, Liliana's worth it, right?" There's Chapin for you; he might be for the good guys, but he's got a good amount of bad.