Round 7: James Stroud vs. Antonino DeRosa 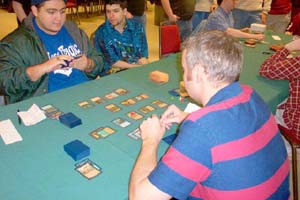 Antonio DeRosa has been doing great things with Wild Mongrel lately. No shock that he should be playing Blue-Green madness today. Pro Tour regular James Stroud downplays his own accomplishments, but his double-digit appearances at the big dance say otherwise. He is with the blue-green Tradewind deck that's been tearing up the PTQ circuit.

"I know this is a good matchup for you. Your deck beats my madness deck." - Antonio DeRosa

"I didn't say that. I just assume I'm going to lose every match, then at least I can be pleasantly surprised." - James Stroud

DeRosa won the die roll, but his start was short of explosive. He led with Looter, to which Stroud answered Spike Feeder off Llanowar Elf. DeRosa madnessed a Rootwalla and made another Looter, but Stroud was ready with Tradewind Rider. DeRosa put on the pain, courtesy Wonder in the 'yard, Waterfront Bouncer, and Wild Mongrel. Stroud thought hard.

"Gotta put my hat on, for the picture, for the ladies." - Antonio DeRosa 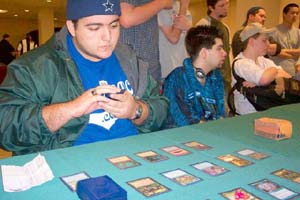 He decided to power out Birds of Paradise and Wild Mongrel. DeRosa simply waited, then when Stroud sent his Waterfront Bouncer back to his hand, responded by Bouncing the Tradewind with a madnessed Arrogant Wurm. Stroud frowned. He untapped and Living Wished for Llawan, Cephalid Empress, putting her into play. DeRosa Looted twice but found nothing of value.

DeRosa bashed in for five, sitting on his four mana. Stroud tried a Tradewind Rider. DeRosa hit it with Circular Logic. Then Stroud's Mongrel charged in, and he thought he was trading when he announced damage on the stack, but he'd forgotten the bonus from the madnessed Logic. DeRosa compounded his difficulties with Intuition for two Roars and a Deep Analysis. His next attack brought Stroud to eight, and then it was over. 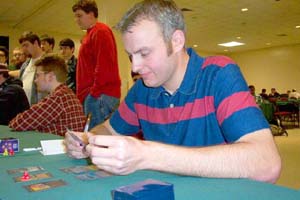 "I can't wait until I get home to Florida. It's so cold here. You know, you figure a fat guy like me would have enough layers to warm up." - Antonio DeRosa

DeRosa was quickly on the back foot in this game, when Stroud opened with Birds of Paradise and Waterfront Bouncer. DeRosa made a Mongrel (his favorite!) and passed it back. Stroud doubled up on Wall of Blossoms. DeRosa had no Wonder, but he did have Spellbane Centaur, shutting down Stroud's next play of Tradewind Rider.

Both players grew their forces. Masticore joined DeRosa's side. Stroud started to pin down DeRosa's mana with the Tradewind. He also had Powder Keg at the ready. DeRosa's Masticore started to punch through for damage, and took out Birds and Bouncer. A timely Rushing River at the end of Stroud's turn freed up still more space for his troops to bash. Stroud returned an island in response. It wasn't enough. DeRosa attacked, and Stroud's draw didn't yield the tools for victory.

3 Waterfront Bouncer 3 Roar of the Wurm