Round 7: Jan Doise vs. Patrick Mello 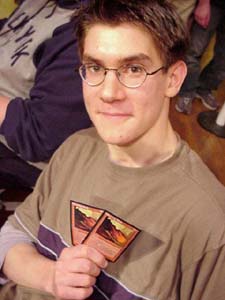 As Jan went 2-2 in the first rounds of draft, he decided he might as well draft for fun. He was hoping to draft a cool blue-red deck but plans turned out the wrong way as the players to his right completely cut him off of blue.

Jan won the die roll and decided to start but it was Patrick who started off with a first turn creature, Hapless Researcher. Next Jan cast Wild Dog, and Patrick's Researcher got the company of an Organ Grinder. Jan thanked him with a Swelter on both creatures and the Wild Dog had a clear path taking Patrick down to 16 life.

Next turn Patrick exchanged his Aven Fogbringer for the Dog upon which Jan played Phantom Tiger and Basking Rootwalla. Things started to look smooth for Jan since the next turn Patrick stuck to playing Deep Analysis and a Cabal Trainee. Jan attacked full force and Patrick took some time to outthink his strategy, then blocked the Tiger to reduce its toughness.

On his next turn Patrick swung the game around playing Cabal Patriarch. This didn't stop Jan from attacking, upon which Patrick blocked the Rootwalla, falling into an obvious trap. Jan finished off the Patriarch with a Sonic Seizure.

Next turn however Patrick revealed his gameplan as he returned the Patriarch with a Morgue Theft, then cast Mirror Wall. Jan kept nibbling Patrick's life total by casting Firecat Blitz, creating four tokens and again attacking full force. Mirror Wall blocked the Tiger which died. Next turn the Cabal Patriarch reappeared. Jan stuck to playing a land and started receiving heavy damage from the 5/5 creature, then cast a second Organ Grinder ending with an empty hand. `

Jan just got a Springing Tiger into play but realized the game was over as Patrick laid his next creature, an Aven Fogbringer. Jan already was low on life and Patrick had enough mana left to activate the Cabal Patriarch's ability and cripple Jan's single blocker.
Game 1 Patrick Mello

Jan took an extra Scorching Missile from his sideboard. Patrick traded Skeletal Scrying for Coral Net. Jan mulliganed to six cards. Patrick: "That is the first mulligan I see all day." Jan started off but nothing happened until Patrick played a third turn Organ Grinder. The Ember Beast Jan played on the next turn was a sitting duck, unable to block on its own.

Jan could not respond to the attack of the black creature for the next two turns as both players were unable to add a permanent to the play zone. A few turns later again it was Patrick who played Mirror Wall. Jan did not believe the bad draws and mana problems he kept having and shook his head: "This only happens to me at the feature matches."

Jan finally found an answer to the Grinder, eliminating it with a Sonic Seizure. This gave him some time to get back in the game. A Cephalid Sage told him otherwise and the Pardic Firecat Jan played disappeared with a Faceless Butcher coming into play.
Jan had taken a beating and was low on life as he cast a Wild Dog. In spite of Ember Beast now being able to block, Patrick attacked with his Faceless Butcher and the Sage. Jan took the obvious choice double-blocking Butcher. As both Butcher and Mad Dog died Jan got back his Pardic Firecat. 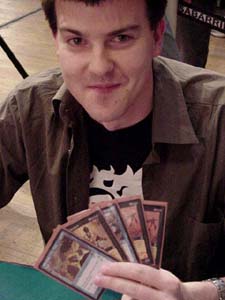 Deep Analysis and Hapless Researcher were Patrick's next spells and Jan seemed to get back in the game casting a Nullmage Advocate. Patrick cast Stupefying Touch and Coral Net on the Advocate. A flashbacked Deep Analysis got Patrick a Morgue Theft returning the Faceless Butcher. Gorilla Titan joined Jan's defenses but then something strange happened. Patrick played Faceless Butcher on a creature of his own rather than on one of Jan's, then cast Aven Fogbringer.

Jan yawned out loud, sensing the situation would get out of hand and so it did. Patrick now cast Upheaval gaining threshold in the process and returned the Sage which got cleared from the Faceless Butcher's hiding maneuver. He had enough mana in the pool to cast an Organ Grinder and a Thought Nibbler. "You are at four life right?" said Patrick.

Patrick had a first pick Cabal Patriarch and second pick Upheaval. From Judgment he was able to draft a Spelljack which he could abuse in combination with the Upheaval. Jan on the other hand had two Scorching Missiles as first picks, considering it was all for fun.