Round 7: Jean-Louis D'Hondt vs. John Ormerod 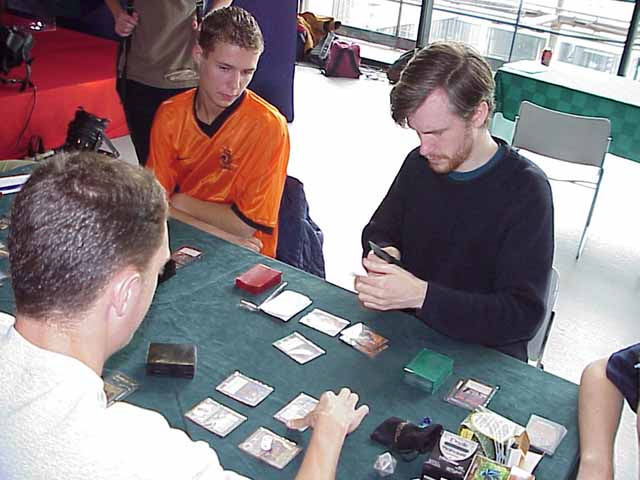 Round Seven saw England's John Ormerod taking on Jean-Louis D'Hondt of Belgium. Both players were undefeated going into this round. Jean Louis has top Grand Prix top eight finishes to his credit at Lisbon and Birmingham and made the top sixteen in this years PT London. John has a top 8 finish at PT Mainz and finished ninth at PT Chicago. He is also a member of the European Alliance team.

John Ormerod has a Red Wildfire deck (for those of you who don't know this uses artifact mana combined with mass board control cards and finishers such as Covetous Dragon) whereas Jean went with a Black control deck featuring Persecute, artifact mana, Masticores, and the like.

Jean won the dice roll and elected to play first. Unfortunately his first hand is bad and he is forced to mulligan. His second is no better so he goes down to five cards. His five card hand is pretty good, though, he has plenty of land and a Vampiric tutor, to fetch whatever works best against John's deck.

After laying a Swamp and a Peat Bog, he Vampiric Tutors for Persecute, as John has laid two mountains and a Fire Diamond, he's obviously hoping John has a bunch of red cards. This turns out not to be the case as John has nothing but a land and a bunch of artifacts in hand.

John slows his opponent down on his next turn by laying a Thran Dynamo and a Tangle Wire. After Jean plays a further land John casts a Mishra's Helix. Jean concedes as his land will be permanently locked.

The players go to their sideboards. John takes out a couple of Masticores for Tectonic Breaks. He has Mogg Salvage which would be good against Jean's deck, but Jean's poor draw means that he doesn't know Jean is playing artifacts ! Jean brigs in Unmasks, Negators, and Masticores.

Jean starts of with an early duress, taking a Fire Diamond. Unfortunately John immediately draws and casts a Grim Monolith. Obviously Jean was hoping that by reducing John's artifact mana he could slow up his game. He also has a Dark Ritual for his own artifact mana - also a Thran Dynamo.

Jean brings out a Scandalmonger now and it takes a Mishra's Helix before it gets Wildfired away, leaving only a tapped Grim Monolith and the Dynamo in play. While John recovers his mana base, a Masticore appears on the other side of the table, bringing John down to four before his own Masticore arrives. As Jean has only one card in hand he can't do much, and the game reaches a stalemate with both players discarding cards to their Masticore.

Jean draws something useful first and allows his Masticore to get buried to play out a Phyrexian Processor, paying six life. Two turns later the game is over as John has no answers to the 6/6 tokens.

John goes back to his sideboard before game three bringing in some Mogg Salvage. He is forced to mulligan and then keeps a one land draw. He can only play a Rishadan Port and a Dust Bowl, along with irrelevant artifacts like Voltaic Key and Temporal Aperture (which of course he can't use) while Jean has a bomb - another Phyrexian Processor, this time for 10 life. John concedes on the next turn as there is absolutely nothing he can do.