Round 7: Jeroen Remie vs. Noah Boeken 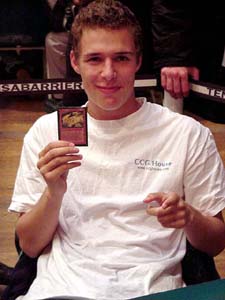 Sponsors. You would think that's all these players think about these days. Noah really wanted me to mention that he's has found a new home at www.CCGHouse.com. Jeroen in turn wanted me to state that he's looking for a sponsor too... Both players were 2-0 with their second draft decks and hope to be 6-1 after this match to put themselves in good shape for day 2. Jeroen was playing a white/blue/black deck sporting lots of flyers like Battle Screech, two Balshan Collaborators, Phantom Flock and Aven Windreader. Noah is playing black/red with lots of removal splashing blue for Cephalid Looter.

Noah won the roll but the first play of the match was Jeroen's Mesmeric Fiend, which ate a Grotesque Hybrid from Noah's hand over Morbid Hunger, Toxic Stench and Soul Scourge. Noah's first play on turn 5 was the Soul Scourge, but Jeroen thought otherwise and flashed the Syncopate.

Jeroen then continued applying the beats with his Fiend and a Pilgrim of Justice. He added a Balshan Collaborator to his team but it met with Morbid Hunger. After a Battle Screech and Deep Analysis things looked pretty grim for Noah. But he came back with a Firebolt, killing the Mesmeric Fiend and therefore getting his Hybrid back. A freshly played Looter was taken out by the same Firebolt, but this was only bait.

Jeroen then played the real threat: Aven Cloudchaser. Unfortunately, the Hybrid held the fort for Noah and was soon reinforced by an Organ Grinder. The Morbid Hunger took out the Cloudchaser in a flashy way and Noah added a Dirty Wererat to his team. Jeroen played Kirtar's Desire on the Grinder, but didn't have much else until a Cabal Torturer showed up.

The four-for-one Deep Analysis didn't really get Jeroen what he needed and he quickly succumbed to Noah's beats... if it wasn't for a new Morbid Hunger, this time for Jeroen. It ook out the Hybrid and gave Jeroen some game again.

After the Hunger, Aven Fisher came. This made Noah make Anger, who was dying to enter the red zone, together with Barbarian Bully and the Wererat. The Bully died to a Toxic Stench Jeroen had been holding on for a while. Aven Windreader got added to Jeroen's team but Noah decided it was time to win, and he slammed down the Firecat Blitz to force the concession from Jeroen, who was visibly upset about losing such a tight game. 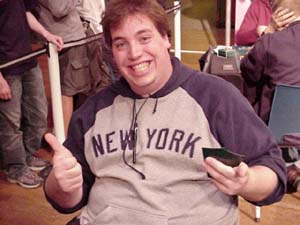 During sideboarding Jeroen stated that he probably should stick to his "sponsor" (he was wearing a New York sweater) until a company starts producing bigger size T-shirts since Jeroen is well... big.

Noah started again the second game and got his wheels in motion by playing a third turn Looter. If Jeroen didn't find an answer soon he wouldn't have a chance to win this game.

On turn four he tried his own Looter, but it met a Lava Dart. Noah followed with Soul Scourge and Jeroen played a Phantom Flock. On his third turn of active Looting, Noah had three flashback cards in his graveyard to display the incredible card advantage he generated. He used two of those spells the next turn to take out the Flock: Crippling Fatigue and Lava Dart. When Dwarven Strike Force came down the only thing Jeroen could do was start chumping with his freshly made Battle Screech tokens. After a Morbid Hunger and a final attack phase, they could shake hands again.

Final Result: Noah Boeken made his sponsor happy by winning 2-0.