Round 7: Jon Finkel vs. Andrea Santin

Jon Finkel needs no introduction but his opponent is a hometown hero. To the rest of the world he is part of a Mark Rosewater trivia question. There have been six Italian players that have made top 8 at either a Pro Tour or Worlds. Jon's opponent, Andrea Santin is a member of that exclusive club. Both players are facing elimination and only one of them will advance—barely—with 13 points. 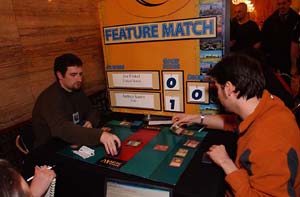 After a lengthy wait for a deck check it was revealed that Jon had misregistered his deck. Rather than listing his Akroma's Vengeances he had listed Akroma's Blessing twice. His penalty? A game loss and fix the decklist.

Jon found himself on the wrong end of Andrea's Lighning Rift early in the game, which limited his ability to cycle with out taking damage. When Andrea commited another card to the board—Ravenous Baloth—Jon was able to cast Vengeance. Andrea played Tephraderm and a Contested Cliffs—Jon had to read the former.

Jon got to Complicate a Silvos a few turns later and eventually cast another Vengeance but Andreas threats just kept coming—another Silvos and Tephraderm. Jon played a face-up Exalted Angel but Contested Cliffs and Tephraderm shot it down.