Round 7: Justin Gary vs. Rob Dougherty 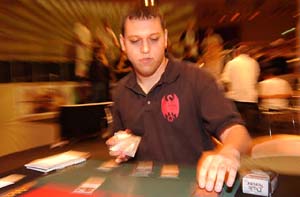 Gary and Dougherty are Your Move Games teammates, a group that had an incredible season on the Pro Tour this year. It will be interesting to see how this match plays out, since YMG are known as Constructed specialists, and are not particularly known for high finishes in draft tournaments. Additionally, there's a little more riding on this match, since Justin Gary is on the United States team, and every match he plays factors into the team's chances of making the finals.

Dougherty started things off with Nantuko Husk, and Gary played a morph. Dougherty then untapped, and played Forgotten Ancient.

Gary- "I am the saddest man in the world."

Indeed, Gary was playing white/blue, and to say that his deck provided a lack of answers for a fourth turn Forgotten Ancient would be an understatement. He attacked with his morph, and played nothing but a land as he simply shook his head. Dougherty made a great situation even better, playing Wirewood Herald and using Fierce Empath to search up Venomspout Brackus.

Gary- "He's a good man. Not gonna lie, your board is looking a lot better than mine."

The Ancient continued to grow with each turn, and put all its counters on the Husk, which gained evasion thanks to Dragon Shadow. From this point, both players seemed to just be going through the motions for the rest of the game, as the outcome was certain.

Mark Rosewater- "Are you going to thank the public?"

Dougherty- "Yes, I'd like to thank the public for such a ridiculous card in Limited."

Gary mulliganed his opening hand. Dougherty had a second turn Gempalm Strider, and Gary played a morph. The Strider came through for two damage, and Dougherty played a morph of his own. Gary's morph swung back to keep pace, and he ended his turn with four mana untapped. Dougherty drew, and cycled Wirewood Guardian to get a fourth land. Dragon Shadow went on the Strider, which couldn't attack quite yet since it was tapped down by Choking Tethers. 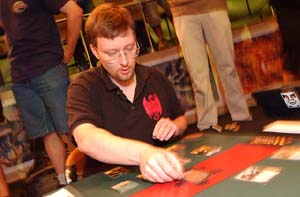 Gary played Zealous Inquisitor, which died to Dougherty's Misery Charm. The Strider attacked for three, and Dougherty played a second morph. Gary's morph got through for another two points of damage, and he tapped out for Grassland Crusader. Dougherty now attacked with his whole team, dealing seven damage total to bring Gary down to eight. Symbiotic Elf came out to give Dougherty a little more pressure. Gary used Temporal Fissure to bounce the Strider, which was an effective answer to the Dragon Shadow problem.

Dougherty attacked with two morphs and the Symbiotic Elf- the morphs were blocked by Gary's Grassland Crusader and morph creature respectively. The Crusader made itself 4/6, and after damage went on the stack, Frontline Strategist flipped over to completely shift the board in Gary's favor. Both of Dougherty's creatures headed to the graveyard, and they were Patron of the Wild and Skinthinner. Dougherty didn't have the second swamp to unmorph Skinthinner, and was a bit unhappy to send him right to the graveyard. Whipgrass Entangler provided even more defense, and slowed down an attack phase- Chill Haunting got it out of the way.

On the following turn, Dougherty attacked with his whole team- Symbiotic Elf, Gempalm Strider, and two morphs. The Crusader blocked a morph, as did the Strategist. Dougherty passed priority, and Gary activated his Crusader to pump the Strategist. The morph it was blocking flipped over to reveal Venomspout Brackus, and Wirewood Pride made the other morph a 4/4. Gary used Astral Steel to make the turn a little less devastating, but the damage had been done. He rebuilt a bit with a morph, and Dougherty sent all his creatures into the Red Zone once more. Liege of the Axe took down Gempalm Strider in combat, but Dougherty had forced through two points of damage to bring Gary down to two. Things slowed down from here, until Dougherty played Forgotten Ancient. Soon after, he unmorphed Sootfeather Flock, and thanks to Venomspout Brackus, it got right through Gary's Dragonstalker. A turn later, the game was over.