Round 7: Justin West vs. Chris Nadebaum

With only one round to go it was win or sidegame for both Nadebaum and West. Both players are based in Melbourne and frequently play eachother in the local tournaments but with Day 2 at Melbourne GP on the line this was possibly their biggest match. 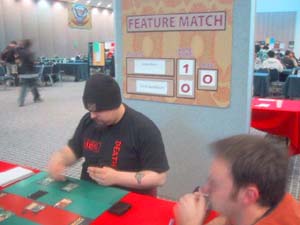 After losing the coin toss to choose the seating Nadebaum struck back with a call of tails, ensuring that he will be the one who plays first. Both players played lands until turn three where Nadebaums face down Towering Baloth traded with West's Nantuko Husk. Nadebaum played another morph on his fourth turn and was matched by a Taunting Elf and a morph from West. Nadebaum elected not to attack during his phase and simply cast a Words of War passing the turn back to West. West however was not quite so tentative to enter the redzone. He played another land, morphed up his Silent Specter and crashed it into Nadebaums hand, netting him a Blistering Firecat and a Tribal Golem, along with 4 life.

Fortunately for Nadebaum the one card left in his hand was a Krosan Tusker. He elected to skip his draw phase, shocked the Specter, Cycled his Tusker and shocked the Specter again, leaving him a grand total of 0 cards in hand, but no longer under threat from the Specter.

Despite losing his monster West seized the opportunity to Smother the tapped out Nadebaum, taking his Battering Craghorn to the graveyard and summoned a Nantuko Husk to start the beats. Nadebaum could find nothing on the top of his deck and watched helplessly as West drew an Elvish Warrior and then a Krosan Tusker to finish off game 1.

Nadebaum thought for a long time before game 2 and then decided to change things up by letting West go first. West got off to a flying start with a turn one Festering Goblin and a turn three morph creature.
Nadebaum responded with a turn 3 savage and when West refused to attack into it with his morph creature alarm bells went off in his head. West continued to drop creatures despite getting stuck on 3 lands, playing a Wellwisher and a Nantuko Husk.

Nadebaum was unphased however and continued to develop his board, playing down a Snarling Undorak then Pinpoint Avalanching Wests morph card, confirming his suspicions that it was indeed a Silent Spectre. West sent his Nantuko Husk into the Red Zone, but Nadebaum was more than content to take the damage, with Krosan Tusker cycling to finally get West some much needed mana.

Nadebaum played a Tribal Golem which was met with a Pacifism from West who then sent his men into the Red Zone for more punishment. Nadebaum hard cast a tusker and then a Venomspout Brackus to put an end to any attacking West believed he might be doing. From there the two player sent the turn back and forth with West drawing into his Wellwisher, and both players slamming down creature after creature causing a huge stalemate on the board.

Nadebaum began attacking with his Battering Craghorn but it was only preventing West from gaining any life from his Wellwisher. When Nadebaum summoned a Words of War it looked as though West's life gaining antics were at an end, but he had the Naturalize in hand putting the game back into a top deck fest.

West was the first one to get a potential break to the procedings drawing into his Tempting Elf and since Nadebaum only had one card in hand it sure looked like a Tempting situation. He untapped and thought long and hard before sending all his men into the redzone along with the Elf. Before blockers Nadebaum flashed West the Pinpoint Avalanche he held in his hand and the two were moving onto game 3. 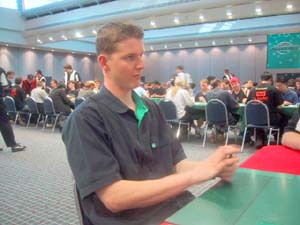 West elected to draw first in the deciding game and thought for a long time before deciding not to take a mulligan. Nadebaum got everything underway with a turn two Wellwisher, which he backed up with a turn four Wirewood Savage. West replied with a Morph and elected not to trade it with the Savage. Nadebaum brought down his Words of War but once again it looked like West was going to have all the answers, crushing it with Naturalize. West then attacked back electing to flip over his unblocked Cadaver and stripped Nadebaums hand of 3 cards, two forests and a Goblin Machinist.

Nadebaum had no return play and simply sent his Savage into the Red Zone, keeping the Wellwisher at home to gain life. West dropped another morph and Nadebaum responded by slamming it with a Pinpoint Avalanche, hoping to mise the Silent Spectre again, unfortunately for him he hit a Gravel Slinger. Things began to take a turn for the worse for Nadebaum as his Morphed down creatures were no match for the Krosan Tusker and Elvish Warrior that West was slamming into the table. The Savage had pecked West's life down to 10 and it was soon at 3 when a seemingly harmless unblocked morph creature turned into a Towering Baloth.

West was forced to stay at home and hope that nothing could push through his defences while he waited for something that could evade the now huge Baloth. West found his answer in his Silent Specter and when it attacked it stripped the only two cards from Nadebaums hand, two land. Now things looked perfect for West and Nadebaum was forced to attack with his Baloth and get it blocked off in the hope of finding something for himself and that's exactly what he did. Over the next two draw phases he drew a Tribal Golem and then the Wave of Indifference that would save him two turns before he would die to the lethal damage of West's men.