Round 7: Kai Budde vs. David Brucker 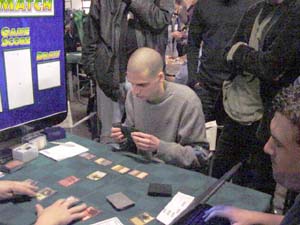 If you don't know who Kai Budde is you probably shouldn't be reading this right now. David Brucker, on the other hand, might be unknown to you if you somehow missed the European Championships this year. Current European Champion, David doesn't have many accomplishments to boast about yet but this 6-0 might lead to another high profile finish to put on his resume.

Before Game 1 Kai and David discussed the jankiness of David's deck and Kai wondered how he got this far... We'll see if David's pile can take down the best player in the world.

David chose to draw first. Both players led with mountains but on turn 2 Kai played a forest and David played a Swamp following that up with a turn 3 plains. The players traded removal and Kai tried to mana-screw David with a Lay Waste on the swamp.

Both players cast some dorks and had them killed and Kai wasted a Primal Boost to save his morph guy from an Explosion for 1. David, at this point, had yet to find a replacement swamp. The lack of black mana stunting his development somewhat as black was actually one of his two main colors. When Kai attacked with his morph guy and David decided not to block he morphed it into a 9/9 Krosan Colossus.

"Nobody told me about that one"

David had the answer in a Pacifism though, turning the Colossus into a nine point bolt. Kai proceeded to rip a Krosan Tusker, creating another threat David had to deal with in a hurry. David didn't seem to draw much of anything as he just said go a lot. He managed to kill the Tusker with a morph guy and a Pinpoint Avalanche. And although David never played anything worth taking a second look at he somehow won by attacking with random 2/2s.

Kai chose to draw first and the game got underway without any mulligans.

Kai played a turn one guy in the new Mogg Raider, Goblin Sledder. David's first guy was a Gustcloak Sentinel, one of the creatures he beat down Kai with in Game 1. A Wirewood Herald stepped in front of it when it attacked and Kai searched for a Symbiotic Elf to hold down the Hill Giant. David added a sizeable threat to the board in an Aven Soulgazer.

"Oh, so you do actually have two good cards..."

A Gangrenous Goliath came down the next turn and David's deck looked just fine this game. A Screeching Buzzard added some more pressure.

And then there was Rorix.

Time and time again Dragons have proven their worth in Limited formats, singlehandedly dominating the game from the moment they are played. This time seemed not to be any different. Completely shutting down David's offense, Kai thought for a time and decided that the best defense is offense and just send the Rorix into the red zone, tying the life totals at 11 apiece. A Chain of Acid on a Pacifism that was holding off Kai's Barkhide Mauler later the race turned into a rout as David took more than 11 damage in one turn.

David decided to keep a 2 swamp hand in game 3 and missed his land drop on turn 3. He drew a mountain and two plains on consecutive turns though, showing the signs of true playing skills. Kai's deck seemed to be a collection of dorky creatures, Rorix and Kamahl as he played a Nosy Goblin, two morph guys a Taunting Elf and a Symbiotic Elf. They did a wonderful job at keeping David at bay though so Kai might have enough time to draw his bombs. 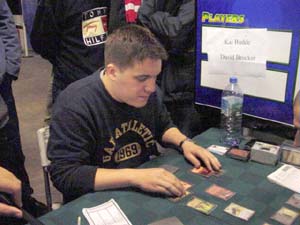 David looked to move the game to the air with a Dive Bomber and Kai added a Snarling Undorak to his army. A Pacifism and an Erratic Explosion later, Kai's team was reduced to a sole Symbiotic Elf. A Haunted Cadaver added insult to injury reducing Kai to one card in hand.

Still, David didn't seem able to stabilize and he couldn't race Kai's dorks with his fliers because he took some early damage when he was busy drawing lands off the top. Kai added yet another 2 power guy to his army but David was not afraid sending his creatures in and putting Kai on 6. When Kai attacked with his two 3 power guys David blocked one and Kai decided not to risk removal with his Primal Boost, opting to play it safe with a Pinpoint Avalanche. This put David at 2 facing two 2 power creatures. He attacked the next turn anyway and Kai killed one of his fliers with a Pinpoint Avalanche. David played another 2/2 flier and passed the turn with a white and a red mana open. A Chain of Plasma didn't cut it though as Kai had the Primal Boost to save his guy.

Final Result: Game 3 and the match to Kai Budde.