Round 7: Kai Budde vs. Francis Cormier 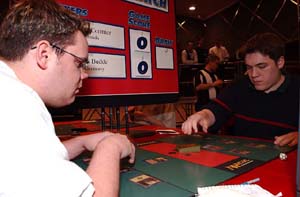 Imagine, if you will, being at your very first Pro Tour, one win from making the cut to Day 2. A lifetime of practice drafts and PTQs all boiled down to a one-game essence. All you have to do is win one... more... match.

And you get paired against Kai Budde.

That lucky person happened to be Francis Cormier of Montreal, Quebec. Cormier had attended a few Grand Prix, but his PT resume consisted only of the day's previous 6 matches. 3-2-1 lifetime.

"I get the task of doing this?" he asked, referring to the task of preventing the game's best player from making another title run.

I'm sure Kai could have played the intimidator role, grilling the less experienced Cormier, and preying on his nervousness and hesitancy. I'm sure that many lesser men in this tournament would have done just that. But Kai, a champion in all facets of the game, treated Cormier with the same gentle respect that he would any opponent. 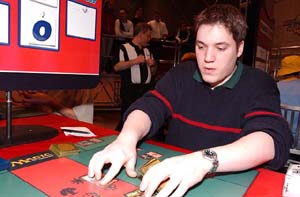 Both players had red/green decks - Kai's with Overrun, and Cormier's with Shower of Coals. Kai has a distinct advantage, however, since his spells are much cheaper that Cormier's on average.

In game 1, Kai had a fantastic start with a turn-2 Wild Mongrel and a turn-3 Minotaur Explorer (discarding a Thermal Blast). Cormier, at 13 life, played his fourth red land and summoned a Rabid Elephant. Budde correctly predicted that Cormier had a Gorilla Titan in his hand, but needed another green source.

Budde kept bashing away with the Mongrel, and eventually added his own Gorilla Titan to the board. A Liquid Fire offed Budde's Mongrel, but the Gorilla attacked Cormier down to 4 and then down to 0.

Kai made no bones about his opening hand being non-aggressive. He said that he drew the Mongrel on turn 2 and the Minotaur on turn 3. If Cormier had a second Forest by turn 5, he could have summoned an 8/8 Titan and it would have been a very different game.

Cormier kept a two-Forest fat creature draw in game 2, but had a Chatter of the Squirrel to put out some early beats. He drew a Mountain early and added a Spellbane Centaur that died to a Budde Firebolt.

Stuck on three land, the Canadian cast a Minotaur Explorer, ditching a Rabid Elephant. Kai answered with a Springing Tiger. Cormier souped up his 3/3 with Seton's Desire and attacked Kai down to 10. Kai then brought forth his Gorilla Titan with the potential to "go large" if he flashed back his Firebolt. 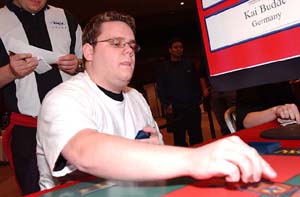 Cormier swung with the Minotaur again, and Kai's life was too low to afford him any chances; he double blocked, losing the Gorilla Titan. Kai played a Krosan Avenger and a Halberdier, which Cormier answered with a 3/3 Metamorphic Wurm.

After the match, the German offered the Canadian some advice about what to play in tomorrow's qualifier and shook his hand.

Budde gets another day to fight, but Cormier will have quite a story to tell that gang back home.