Round 7: Kai Budde vs. Nicolai Herzog 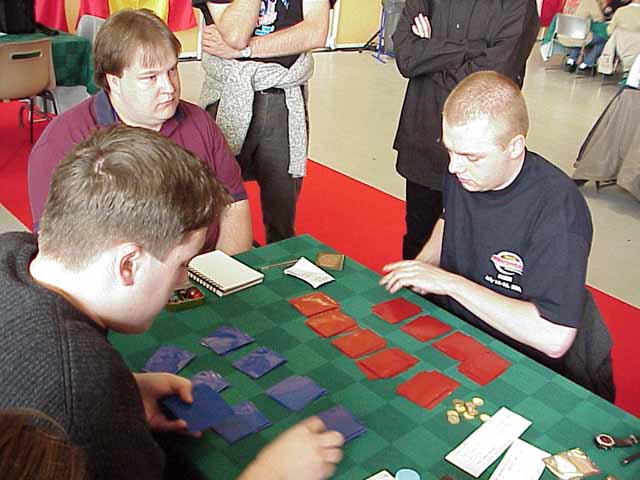 Kai Budde showed up for Saturday with a pretty cool black/blue Tinker deck. He's got all the usual artifact mana plus Duress, Vampiric Tutor and 4 copies of Perish in his sideboard. He felt really good about those Perishes when Nicolai Herzog sat down across from him for a round 7 feature match. Nicolai Herzog played Stompy when he won the Euro championship last summer and then played the same Stompy deck when he made Top 8 at Worlds.

When Budde played turn 1 Underground River, Herzog looked surprised, and then puzzled, and then curious. Budde tapped it to cast Duress and laughed out loud when Herzog showed him a Stompy hand. Herzog's Stompy is fairly typical, but does include 2 main deck Lumbering Satyrs. The Satyrs are his secret weapon against Angry Hermit and Trinity Green decks. Everyone here seems to have a secret weapon against Hermit. When it first did well (at US Nationals) no one seemed to take it seriously and thus is was able to well at Canadian Nationals and it won both the Latin America and APAC championships. Now everyone believes and everyone is gunning for it. Wildfire is everywhere, people are splashing black for Perish, and of course I have yet to see a single Angry Hermit deck!

Budde took Tangle Wire out of Herzog's hand, leaving him his Rancor and filing away the rest of the contents of his hand (including Blastoderm and Satyr). Herzog played a pair of Wild Dogs and Budde played a Tangle Wire. Herzog attacked for 9 on his fourth turn (thanks to Giant Growth) and Budde took a long time deciding how to play his next turn.

After processing his own Tangle Wire (with 2 counters left), Budde decided to Tinker up a Masticore sacrificing Sky Diamond (and not the Wire). He then shot a Wild Dog before Herzog's main phase in order to power Herzog's Cradle down to just one mana and prevent him from casting either of the 4-mana fatties in his hand. Herzog settled for replaying Rancor and bashing for 4 with the other Dog. Once Budde untapped and shot the other Dog, Herzog was down to just a 0-power cradle and 3 forests in play. Budde's plan was to use his Port on each of the next five turns and hope he could attack with Masticore five times before Herzog could cast Blastoderm. It worked. Herzog drew only one land over those turns. "That was some gamble," commented Herzog � Budde nodded, quite happy to take a close game one and then get to add 4 Perishes to his deck.

Budde exploded on his second turn in game with Grim Monolith, Monolith #2, Thran Dynamo, and then Tangle Wire. Nicolai asked "Does this remind you of Worlds?" The problem was that Budde has no offensive threats and after a couple of turns went by Herzog was able to destroy the Dynamo with an Orangutan. Budde then drew Vampiric Tutor, went for Tinker, and Tinkered out a Processor with just enough mana left to make a guy and play a new Tangle Wire. Herzog tapped all his permanents except two lands and then played Gaea's Cradle to give himself enough mana to Splinter away the Processor. Budde was hoping Herzog wouldn't have a Cradle in his hand. Herzog's Cradle/Splinter play meant Budde only got one guy and that wasn't enough - Herzog used Giant Growth to swarm around it and even the match at a game apiece.

Budde played Key, Sky Diamond, Grim Monolith, and Thran Dynamo over the course of his first three turns. That allowed him to Tinker out a Masticore on turn 4 with 10 mana available. He used it to kill Albino Troll and Llanowar Elf and still have 2 mana left over to regenerate Masticore against any potential Uktabis. Budde said done and then said to Herzog "My guess is that you play 4 Uktabi and 2 Splinters. Uktabi is a better card in Stompy." Of course, a Splinter would have absolutely destroyed Budde. Herzog didn't have one. Budde discarded the only card in his hand for 5 straight turns and that was that.

Budde commented after the match that "Perish is pretty good in this matchup � 'Discard to Masticore'!"