Round 7: Kai Budde vs. Svend Geertsen 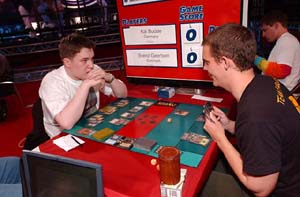 Svend Geertsen would at least like to play it out. A veteran of three Top 8's, the Dane thinks he has what it takes to dethrone the current king of Magic. Starting out 7-0 would be a good start.

Kai played first, but was forced to mulligan. He came out nicely, with a Phantatog and an Aven Fisher against Svend's horde of squirrels (Chatter and Acorn Harvest). Deep Analysis with flashback got Kai way ahead in cards; he had extras to feed to the Phantatog, allowing it to eat Svend's Centaur Chieftain. But the squirrels work working overtime, and Kai was down to eight by the time he stabilized the board.

The fight moved to the air as Kai got out his monstrous Angel of Retribution and Svend a Repentant Vampire. There was a rules mix-up at one point; a turn after Svend's Vampirewas chump-blocked by Kai's Aven Fisher, Svend realized it should have gotten a +1/+1 counter. Kai called for head judge Rune Horvik, who explained that if a full turn had passed, the game state would not be altered. Svend stared at the judge slack-jawed for a moment, when Kai suddenly picked up a die and set it calmly on the Vampire.

His act of kindness came back to haunt him: the 4/4 Vampire, when combined with Nantuko Disciple, was to big for his Angel of Retribution to stop. As Kai put his Angel in the graveyard, he said, "That counter is losing me the game."

"I know. Sorry. I mean, thanks," said Geertsen, half-embarrassed.

The counter did, in fact, cause Kai to lose, and as he scooped up his cards he asked Svend to remember to play faster in the other games. "Of course," replied the Dane.

Both players picked up the pace in the second game, but Kai's cards came out quite slowly: he stopped at two land until turn 7. He did manage to kill off Svend's Organ Grinder with a Psionic Gifted Aquamoeba, but Svend's Centaur Chieftain, Repentant Vampire, and Nantuko Disciple were way too much.

"Sorry about game 1," Svend apologized, "but t doesn't matter. You're still going to win it, right?"