Round 7: Kamiel Cornelissen vs. Darwin Kastle 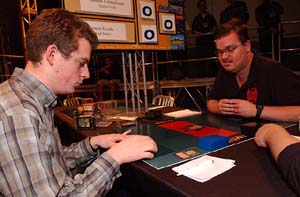 Darwin and Kamiel's decks sit at opposite ends of the mana curve. Darwin is playing a metagame tuned version of The Rock that he has dubbed Rock Therapy. It relies on early disruption with eight discard spells and finishes with old stand-byes Spiritmonger and Treetop Village. Kamiel is playing Angry Hermit Part 2—the fastest deck in the format with multiple turn 2 kills notched in its belt this afternoon.

Both players sit atop the standings at 6-0 and they are playing, since both are guaranteed to be playing tomorrow. Darwin is in need of a good performance as he is in danger of falling off of the gravy train.

Darwin: "I don't know how many Pro Points I have but I know its not enough for Chicago...I am heading in the right direction though." In fact Darwin had only lost one game all day to this point.

Both players kept their opening hands and Darwin kicked things off with a Cabal Therapy naming Duress—and he was successful. He also saw Avatar of Woe, Mox Diamond, Reanimate, Bloodstained Mire, City of Brass and Reflecting Pool. Kamiel played the CoB and chose to hold back on the Diamond.

Darwin drew and played Duress. He saw that Kamiel had drawn a Darigaaz's Caldera and took the Mox that Kamiel held back: "That wasn't in the right order but it worked out okay!" He followed it up with another Cabal Therapy and took the Reanimate. Kamiel played a Reflecting Pool.

Confident that he had the upper hand, Darwin played a treetop Village and sent the turn back to Darwin. Kamiel wasn't doing anything to frighten Darwin and kept playing lands. The Treetop Village went to work over the next few turns and took Kamiel down to 10 before he cast a spell in this game—after returning his CoB with the Caldera he discarded it to a Mox Diamond.

Before the Village could get back to work Darwin took a turn to play a Bird of Paradise and sacrificed it to flash back Cabal Therapy. Kamiel responded with Vampiric Tutor. Darwin named Avatar of Woe and played another Bird. The Hermit Druid that was tutored for did not live past the EOT after Darwin Edicted it away. Now the Treetop was ready to get busy again and it had two more attacks before Kamiel was able to hardcast a Verdant Force.

Darwin had another EOT Edict and that was the game. 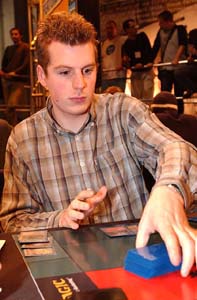 Darwin was feeling good after the first game: "Who hits on turn 1 cabal Therapy? Well except for when Kibler flips over a Counterspell on turn 1...but other than that?"

Darwin had not actually seen the Angry Hermit in action during the day and cocked an eyebrow when the Dutch player played a first turn Hermit Druid. "Hmmmm..." said Darwin as he tried to decide what to name on Cabal Therapy. He named Reanimate but only found Duress, Exhume, and Avatar of Woe. Hmmmm...indeed.

Kamiel took his time and cast his Duress on the second turn. He saw three lands, two Pernicious Deed and a Diabolic Edict, which went right in the bin. Darwin had no turn two play and Kamiel activated his Druid during his EOT. About 1/3 of the deck flipped by including Anger and Verdant Force when he hit the lone Mountain that the Druid could turn up.

Kamiel played the mountain and said, "Go". Darwin played a third land and tapped out to cast the Deed. He was now officially dead although he did not know it yet. During Darwin's EOT, Kamiel activated the Druid flipping the rest of his deck over. He used the remaining mana to flash back a Krosan Reclamation targeting two Exhumes. Darwin used the Deed for 0 to kill the Mox but it did not matter.

Kamiel untapped, drew, and exhumed a 25/25 trampling Sutured Ghoul with haste. Darwin had lost only his second game all day long. The normally stoic Kamiel took a moment to waggle his eyebrows at a few teammates in the bleachers.

Darwin opened with Bird of Paradise over Duress. Kamiel had a rather sedate first turn with only a Llanowar Wastes. Darwin considered using a Vampiric Tutor during his upkeep but decided to draw instead. He played a Llanowar Wastes of his own and cast Duress off of the Bird. He saw Entomb—which he took—Verdant Force, Vampiric Tutor, Avatar of Woe, Exhume, and two lands. Kamiel came back with his own Duress off of the top. In response Darwin Tutored for Planar Void. Aaron Forsythe leaned over and whispered to me, "That's sick!" The Duress found a Deed and two Edicts—one Diabolic and the other coming from Chainer. The instant was discarded and Kamiel played a Tarnished Citadel and said go. 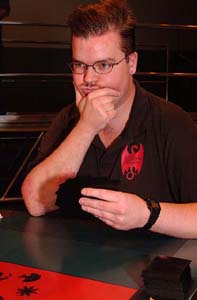 Darwin was out of land by turn three but seemed happy to cast the Planar Void. Kamiel looked vexed and kept playing land. Darwin was still sitting on three mana—one of which was a Bird—and played his Pernicious Deed. Both players went into Draw-go mode for the next few turns although only Kamiel was laying lands.

Darwin drew his third land and played a Masticore. At the end of turn, Kamiel tutored for a Ray of Revelation. I leaned over to Aaron, "That is also sick!" Kamiel untapped—including pitching a card to untap Forsaken City—and said, "Go."

Darwin was now stuck at 2 cards as he started paying the upkeep on Masticore—putting Kamiel on a five-turn clock. During Darwin's end step, Kamiel destroyed the Planar Void. After a brief consultation with the judges it was confirmed that the Ray would not be removed for the game although the Planar Void would. In the end it was removed when he then flashed it back to kill the Deed. Now that all of Darwin's enchantments were gone Kamiel was able to...say, "Go."

The Masticore made it impossible for Kamiel to play his Hermit Druid although he did give it a try on the last possible turn but Darwin did remember to shoot the 1/1.

Darwin Kastle had run the table and sat atop the standings with a 7-0 record and only two game losses all day long.