Round 7: Kazuya Hirabayashi vs. Katsuhiro Mori 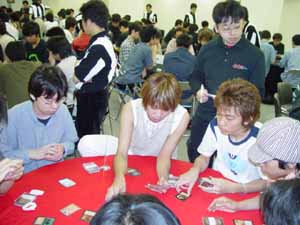 With his rapid-fire playstyle and success, Katsuhiro Mori is one of Japan’s top stars, and a great way to draw a crowd for a feature match. He finished yesterday with an impressive 5-1 record, and is in prime position to make a run at the Top 8. Unfortunately, he didn’t get the removal he wanted for his red/green deck, and to make matters worse, he has to play his first match against Kazuya Hirabayashi, who was feeding him in the draft. Hirabayashi is considered by many to be Japan’s premiere deckbuilder, and he came in second place and Grand Prix Sendai in 2001, which was Extended. His Limited skills aren’t anything to scoff at eirher, since he drafted a solid white/blue deck. In fact, Mori was hoping he wouldn’t have to play Hirabayashi, since he feels it’s a poor matchup.

Hirabayashi had a second turn Aven Farseer, and Mori summoned a morph creature. The Farseer attacked for a point of damage, and Hirabayashi had a morph of his own. Mori attacked for two with his morph and played another, missing his fourth land drop. He made it on the following turn and opted not to attack, since Hirabayashi had four untapped mana and a morph creature waiting to block. Instead, he simply played Krosan Vorine and ended his turn. This set him up for an attack next turn where he wouldn’t be trumped by Hirabayashi’s morph thanks to the Accelerated Mutation in his hand. Mori untapped, thought for a bit (which is somewhat uncharacteristic) and attacked with the Vorine provoking the Farseer, and sent a morph into the attack as well. After a few seconds he sent his other morph into the Red Zone, but the judge told him he had already declared attackers. Hirabayashi’s morph blocked Mori’s, and flipped over to reveal Aven Liberator. He did this before damage went on the stack, so Mori simply flipped his morph over to reveal Venomspout Brackus, and the Liberator took five damage and headed to the graveyard.

This was rough for Hirabayashi, but it wasn’t all bad news since his Farseer was now a 3/3. His aerial army increased with Mistform Dreamer, but he couldn’t do much with the Brackus ready to spit at anything that moved. Mori summoned Wirewood Savage, and Aven Fateshaper gave Hirabayashi yet another evasion creature. Mori started attacking with his team, and Hirabayashi was helpless to block or the Brackus would shoot defenders down. At this point things were looking lopsided thanks to the 5/5 Beast on the table stopping fliers from doing anything, but then Hirabayashi drew seven cards with Rush of Knowledge. Sensing that things could start getting bad and that he wasn’t in any immediate danger, Mori started attacking with his Brackus. Hirabayashi chump blocked it with his Dreamer, and Mori summoned Brontotherium, drawing a card off the Savage. Hirabayashi swung back with the Fateshaper, and played Catapult Squad along with Mistform Wall. Brontotherium attacked and provoked the Fateshaper, which would have allowed the Brackus to shoot it down in combat if not for Choking Tethers. In fact, a cycled Sunfire Balm allowed the Fateshaper to survive combat, while Bronotherium headed to the graveyard. Rather than use Accelerated Mutation to save his provoker, Mori summoned Needleshot Gourna. Thanks to Hirabayashi’s Mistform Wall and Capaput Squad, the Fateshaper was able to attack by the 3/6 without a problem.

Once the Brackus was untapped, the game became a stalemate. Hirabayashi certainly wasn’t going to get through on the ground, and his fliers couldn’t get past the Brackus and the Gourna. At the same time, Mori was in no position to mount an attack. Hirabayashi cast his second Rush of Knowledge of the game, drawing seven cards and leaving only five in his library. Meanwhile, Mori played yet another Needleshot Gourna. Hirabayashi realized he needed to go for the win soon, so he played Daru Warchief, unmorphed Mistform Seaswift, and attacked with four fliers. Venomspout Brackus shot down Wingbeat Warrior, while Gournas blocked the Fateshaper and Seaswift. When Hirabayashi tried to shoot a Gourna down with Catapult Squad, Mori was waiting with Accelerated Mutation to save it. Mori had an opportunity for a big attack, but only swung with Tephraderm. It was the right call, since Hirabayashi unmorphed Frontline Strategist. Noble Templar gave Hirabayashi another creature on the ground, and he burned for two since he tapped six, forgetting about the Warchief. It didn’t matter, as he was able to get enough damage through in the air before getting decked.

Mori started with Wirewood Savage, while Hirabayashihad a third turn White Knight. The Savage started to do its thing, as Battering Craghorn drew Mori a card, and then attacked on the following turn to trade with White Knight. Hirabayashi had a morph along with Mistform Dreamer, but Mori kept playing Beasts and drawing cards. Mori even drew into his white splash, and summoned Dragon Stalker. Brontotherium attacked and provoked, prompting a double block by Hirabayashi. Accelerated Mutation made the 5/3 into a massive trampling machine, but Hirabayashi’s morph was Frontline Strategiest, and halted the plan. Mori tried to play another provoke creature in Krosan Vorine, but Hirabayashi had Dispersal Shield. Suddenly, Hirabayashi was coming back from being on the ropes, and was putting up a fight. He played Aven Fateshaper, and almost drew seven cards off the top since he was used to doing it with Rush of Knowledge, but caught himself before looking at them. Brontotherium attacked and traded with the Fateshaper, allowing Dragon Stalker to continue attacking for three points of damage a turn.

Thanks to the Fateshaper, Hirabayashi had dug into the card he needed to stabilize the board, and unmorphed Mistform Seaswift to block and trade with the Stalker. The once crowded board now became Hirabayashi’s Mistform Dreamer to Mori’s Goblin Clearcutter. Mori was able to draw enough monsters to smash through, and used Carbonize to finish the job.

Mori summoned Goblin Sledder and a morph, and Hirabayashi had a morph of his own. It attacked and was double blocked by Mori’s creatures, and flipped over to reveal Seaswift. It traded with Mori’s morph (Skirk Commando), and Mori came back with Clearcutter while Hirabayashi had Catapult Squad and Aven Redeemer. With the help of the Clearcutter, Wirewood Savage came out, directly followed by Tephraderm. Mori’s team started to get through for serious damage, and Krosan Vorine made the game advantage even more lopsided. Hirabayashi’s Noble Templar slowed things down a bit, causing Tephraderm to be the only creature that could get through for damage, and it was only dealing two damage per attack thanks to the Redeemer. Daru Warchief gave Hirabayashi enough on the ground to stop Mori’s attack, and the game slowed to a crawl. Both players built up their sides even further, with Hirabayashi played Mistform Wall and White Knight while Mori had a morph and Dragon Stalker.

Rush of Knowledge drew Hirabayashi into six cards, but as had been the case throughout the match, his deck was lacking ways to break out of a stalemate. Mori didn’t have anything to get through either, and the match ended in a draw.