Round 7: Kuniyoshi Ishii vs. Dirk Baberowski 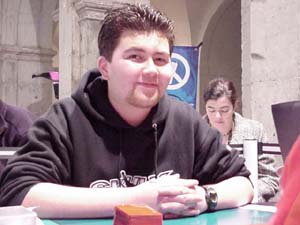 Dirk Baberowski, former Rookie of the Year, entered this match by far the more experienced player. With two Pro Tour wins under his belt, despite a year long sabbatical from the tour, Dirk's arrival at Grand Prix Lisbon was a signal to the Pro Tour. He's back.

His opponent Kuniyoshi Ishii is a Pro Tour virgin, however, he's a very capable opponent having made Top 8 at the last Grand Prix Lisbon. He skipped the Tour because an admin error meant he didn't get his winnings through in time.

As the two sat down to play I asked them if they knew the matchup, and having been told what the German was playing beforehand, Ishii had the edge. Ishii was running a Jensen-esque version of Oath, while Dirk was running the German version. Oath vs. Oath promised to be a very dull match, and it was apparent it was a matchup where experience would count.

Dirk won the coin flip, and decided to start. With only 50 minutes to play, I guessed that this match would either be a draw or a very longwinded 1-0 win.

The highlights of this feature match came both at the beginning and the end. Having presented his opponent with a 59 card deck, Dirk instantly started a game down, and once the fuss was over, and a replacement Tropical was added to Dirks deck, they began in earnest. Dirk at this point was 5-1 and was looking for a draw, so he could win the last round and make day 2.

Both players kept their hands, and the early game, as predicted involved playing a lot of lands, and casting a lot of Impulses and Brainstorms. Occasionally instead of discarding one of them would cast an Oath, or a Seal of Cleansing, but for the most part nothing happened.

It was the mid-game when disaster struck for Ishii... in Ishii's upkeep Dirk tried to resolve a Fact or Fiction. The first one was countered, but Dirk's second Fact or Fiction, cast in his main phase resolved, and that was the beginning of the end. Over the next seven of Ishii's upkeeps Dirk resolved a Fact or Fiction, and simply out drew his opponent, occasionally shuffling up when a Gaea's Blessing was revealed. Interestingly Ishii never offered a 5 - 0 split when a Blessing was revealed and the other cards were useless, so Dirk always had gas. 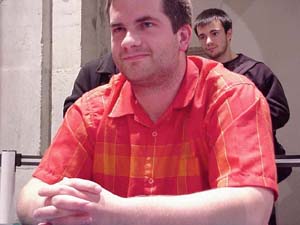 Dirk Baberowski Towards the end of the Game, Ishii had both his Blessings in hand, but Dirk had seven cards in his hand, including a Forbid, which was very powerful in the mirror matchup.

Dirk allowed Ishii to accumulated Knowledge for four, leaving him only three cards in library, well aware that only two counters were left in his deck, while Dirk had been Impulsing and Brainstorming constantly to keep his hand chock full o'goodies.

On Ishii's last turn, he tried to resolve Gaea's blessing, with two Counters to back it up, but Dirk countered all three spells, and then countered the second Gaea's Blessing for the win.

Of course by this point there were only two minutes left on the round, so they agreed it was a draw.

Both players go into the last round needing a win for day 2.