Round 7: Les Plus Nas vs. Unusual Suspects 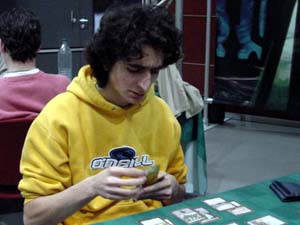 sat down with Gab and Reinhard to hand out the first real loss for either of the teams: both haven't had a major point drop so far with Les Plus Nas on 6-0 and Unusual Suspects on 5-0-1.

Reinhard won the toss and chose to play. No worries about mulligans, so we start the game with Reinhard playing a Viridian Longbow off of a plains. Gabriel responded in his next two turns with two swamps and a Slith Bloodletter, while Reinhard tried an Arcbound Stinger and equipped it to finish the Bloodletter quick. Gabriel thought a long time about playing the Slith, knowing Reinhard could equip and shoot, but tempo was the more important thing according to the French maestro.

Gabriel made a Soldier Replica, while Reinhard gave the Stinger another piece of equipment: Leonin Bola. Skyhunter Patrol joined the French side and the Soldier Replica served for one point of damage and Reinhard had no better play than another Bola and gave it to the Stinger.

The Stinger became a major force to be dealt with, Gabriel must have thought, because an impressive Essence Drain finished the Arcbound man. Gabriel brought Reinhard to 16 with the Patrol and the Replica and played his BOMB: Pristine Angel. Reinhard clearly was on the losing side of the table when he only responded with Leonin Den Guard that grew a little when Leonin Bola got equipped to it.

Gabriel attacked for some more damage and added Sun Droplet to the board to untap the Angel. Reinhard had topdecked a Slith Attendant and immediatly Bola was attached and the Den Guard got a Longbow. Things were not looking quite good for the German.

When a Chromatic Sphere got cracked for white mana and a Culling Scales came off the top of Gabriel's library, the Frenchman sighed a "how lucky !" and the game was pretty much over. All the cheap artifacts on Reinhard's side provided the Scales with enough targets for the rest of the game and since Reinhard only could play Hoverguard Observer to even the board, it looked kinda grim for Germany.
When Gabriel added Loxodon Mystic to the board and Reinhard's library didn't come up with anything useful, Gabriel had won the first game.

Reinhard chose to play first and Gabriel had to mulligan twice and kept a bad hand to avoid a 4 card hand. Reinhard excused himself honestly, but the Frenchman wanted nothing of it; these sort of things happen in Magic, he said.

Reinhard dropped Slith Ascendant, Soldier Replica and Neurok Familiar on his first three turns, while Gabriel's only answer was a Talisman of Dominance. Not bad though, for a two mulligan hand !

An Emissary of Despair made Gabriel take damage from the Talisman and when the Slith attacked he was immediately assigned as blocker only to be killed by the Soldier Replica to save the 2/2 Slith.
Gabriel tried another Emissary, but Hoverguard Overseer and Leonin Den Guard on Reinhard's side were more impressive. Gabriel's reply was a lonesome Sun Droplet and Reinhard charged it up with some counters when he attacked for 6, leaving Gabriel at 7 life points. In Gab's upkeep he went back to 8 and a Loxodon Mystic came to aid as Gabriel's first big guy, but the race would soon be over, because the German army was already too big and double mulligans is just too nasty.

Gabriel got himself a little extra time when an entwined Blinding Beam hit the spot, but his next turn's Chromatic Sphere got him nothing but white mana and an extra plains; Gabriel lost the second game.

At this point, Reinhard teammates got to 2-0, so Gabriel had to play for some respect of the audience.

Both players kept their hands and Gab's first play was a Soldier Replica on his third turn. Reinhard's third turn gave him an equipped Stinger again (Longbow), but this time Gabriel was on the aggressive side with first blood off the Replica serving for 1 damage and a Leonin Battlemage; scary stuff.

Reinhard's 4th turn play gave him a Hoverguard Overseer, but Gabriel was not impressed, since it could only block creatures with flying and so the Frenchman got to attack for 3. Reinhard also tried to attack for 3, but the Soldier Replica shot the 3/3 out of the air. Reinhard replaced him with another 3/3: Loxodon Mystic.
Gabriel seemed a little light on threats, because he only played a Pteron Ghost on his next turn that got shot by the Arcbound Stinger and pumped by the Battlemage. Clearly the Frenchman tried to slow down Reinhard and that worked a little, since the Ghost got shot in the German's mainphase and a Clockwork Condor was made next.

Battlemage was kept small or tapped by Reinhard's Mystic and so the German was able to attack for 6 with his 3/3's; Mystic and Condor. Gab tried to block and kill the Mystic, but Reinhard had Razor Barrier to save his tapper. An impressive Razor Golem got equipped with a Leonin Bola and Reinhard thought he was in a good shape, only to be disappointed when Gabriel's next play was Pristine Angel. 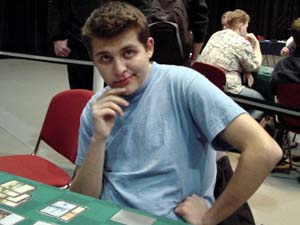 Reinhard thought long about alpha striking with his team and putting Gabriel to 2 with the help of Roar of the Ka and with Longbow still in play on the Razor Golem. Eventually he did, but Gabriel had Altars Light for the Longbow and stabilized the board on 1 life. That seemed not too good, but he still had Leonin Battlemage and Pristine Angel in play and those guys untapped each time he played a spell…

In the end, Reinhard drew nothing more from his library and had to give up, but his teammates gave Unusual Suspects a deserved 2-1.