Both players came into this round at 16 points, and needed at least a win and two draws in the last four rounds, or simply two wins, to make it to Sunday's Swiss rounds. Both players drew an audience of their respective countrymen. 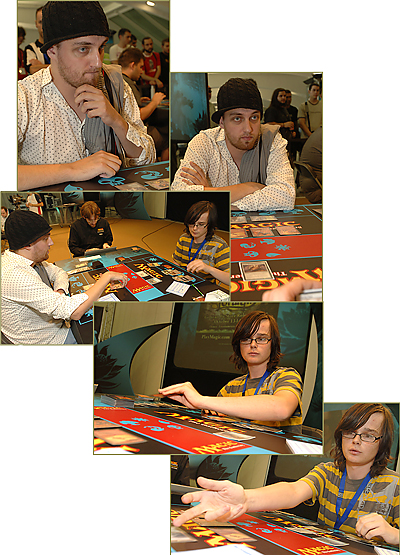 Mark Herberholz and Marijn Lybaert could hardly be more different, but they share a drive to succeed in Magic.Heezy won the die roll and kicked of with Swamp into Duress on turn one and again on turn two. He saw Sensei's Divining Top, Living Wish, Collective Restraint, and Duress. "Looks like Tog," quoted Heezy as he noted down the contents of Marijn's hand and stripped the Belgian of Sensei's Divining Top and Living Wish. A third Duress revealed that Marijn had drawn only land and was now left with a single Duress as his available spell. That Duress revealed Molten Rain and Seal of Fire in Heezy's hand, and the way was clear for Marijn's freshly drawn Living Wish.

The Wish gave Lybaert access to Sundering Titan, but not the mana to use it yet. Instead, he had Collective Restraint in the face of Heezy's beatdown suite with Treetop Village, Grim Lavamancer and Mogg Fanatic. Having finally drawn both Urborg, Tomb of Yawgmoth and enough mana to play the Titan, Lybaert chose Treetop Village as a Swamp to destroy together with the rest of Heezy's lands—save for a single actual Swamp. Heezy Putrefy'd the Titan, but when Lybaert moved to target his Breeding Pool as both Islandand Forest, Herberholz objected and called a judge.

The table ruling that, yes, this works, instantly made Heezy call for the head judge, who just as instantly confirmed the ruling. Marijn made Sensei's Divining Top and sat safely behind his Collective Restraint. Duress from Marijn took out Heezy's last card in hand, Seal of Fire, and the American scooped up his cards after Sundering Titan number two led the way for a one-sided clearance sale via Pernicious Deed.

Mutual wishes of good luck preceded early Grim Lavamancer action from Heezy in a match that pitched the young European talent against the inconsistent but potentially masterful American, a grudge match, if you will. "Some random?" Antonino De Rosa was heard to ask bystanders in the audience, seemingly not recognizing the young Belgian talent's name.

Tarmogoyf from Herberholz was not really synergistic with Grim Lavamancer, but who cares? It's Tarmogoyf! Loxodon Hierarch for Marijn was a roadblock for the 2/3 Tarmogoyf, but Heezy had Putrefy for the Elephant and smashed in with Kird Ape and the Tarmogoyf. Marijn went to 18, not done in yet by a long shot.

"Yeah, Grudge match!" exclaimed Antonino De Rosa when he saw fellow American Jason Imperiale battling it out on the other feature match table against Shuuhei Nakamura. Things weren't looking up for the land of the free and the home of the brave, though, because both Americans were one game down.

Search for Tomorrow from Marijn brought him up to six lands, also known as Titan mana. But he searched out an Island, the only one on the table; Titan was apparently not his plan. Instead, Living Wish went for Cabal Coffers. Another Living Wish in Marijn's hand never got to play, as Heezy had Duress, seeing Platinum Angel! Sensing a problem, he came in for 10 with everything he had. Marijn went to 6.

Lybaert took his time to decide on action after he'd drawn his card. It was Pernicious Deed, played and activated, and leaving just Treetop Village as the smoldering remains of Heezy's offense. While the American rebuilt with Kird Ape, Duress took Seal of Primordium from his hand, and Marijn saw the way clear for Platinum Angel. Life totals: Marijn 6, Heezy 15. Loxodon Hierarch joined Marijn's forces, and while Heezy could stop it via a Kird Ape and Treetop Village double block, Sundering Titan decimated his mana base and removed every chance for a comeback.

A bad beat for the U.S., as Jason Imperiale also took a straight 0-2 loss against Shuuhei Nakamura.