Round 7: Masahiko Morita vs. Jun Nobushita 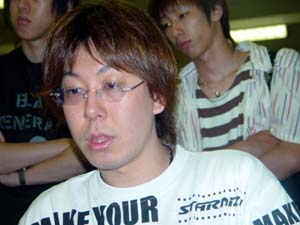 Morita is one of only three Japanese players with a Masters title, as he won the Team Masters event a few years back with Katsuhiro Mori and Masashiro Kuroda as a member of PS2. Mori and Kuroda went on to significant individual success, and while Morita has been solid on Pro Tours and Grand Prix, he has yet to have the same breakthrough events to establish himself as a major force. Jun Nobushita is a veteran who came in second at the last APAC tournament, and is a member of Team Fireball along with Jin Okamoto. He's a staple at Japanese Grand Prix tournaments, and well known in Japan.

Morita played Cranial Plate, and Nobushita had Yotian Soldier. Morita summoned Chittering Rats, which didn't block Yotian Soldier in fear of a trick. Echoing Ruin destroyed the Plate, and Nobushita ended his turn. Morita brought out Scavenging Scarab, and Nobushita cast Journey of Discovery to fetch more lands. The Soldier blocked the Scarab, and Granite Shard came out to deal the final point of damage to kill it. Nobushita played Skyreach Manta as a 4/4, and Morita's team attacked for five before being joined by Pewter Golem. Nobushita played Fangren Pathcutter, and Morita attacked right through to force through more damage, sending Essence Drain straight to the dome- another Essence Drain on the following turn did the rest.

Both players started with a Conjurer's Bauble, and Morita played a second turn Gold Myr. This accelerated out a Synod Centurion, and Nobushita cast Ferocious Charge on end step in an effort to find some action cards. He untapped, and played Sun Droplet along with Sylvok Explorer. Morita played Chittering Rats, and attacked for four with his Centurion. Nobushita improved his defense with Mirror Golem, which got protection from artifacts by grabbing Conjurer's Bauble. Morita played a Whispersilk Cloak that would have broken the stalemate, but Nobushita had Echoing Ruin to stop the threat. Morita played a Krark-Clan Stoker, and soon it was attacking with the Rats, with Nobushita hesitant to block with his Golem in fear of a trick. Wayfarer's Bauble got Nobushita up to four basic land types, and he played Skyreach Manta as a 4/4. Morita attacked with all his creatures, losing the Centurion and a Battered Golem in the process. However, he got through six damage, bringing Nobushita down to twelve. More importantly, Essence Drain got the Mirror Golem out of the way.

Nobushita started to recover thanks to Sun Droplet, and he played Fangren Pathcutter. Morita attacked with just his Atog, and did nothing else. Tangle Golem gave Nobushita another large creature, making attacking even less attractive for Morita. Morita drew and played a Cranial Plate, putting it on his Atog. Nobushita played a Skyhunter Patrol, which was the only flying creature on the table. Morita's Atog attacked, and traded with the Tangle Golem. The Plate then went on the Rats, and Morita ended his turn. Nobushita played Talon of Pain, and sent his Patrol through the air for two damage. With the counter on the Talon, he killed Morita's Alpha Myr. Morita tried to kill the Patrol with Essence Drain, but Nobushita used Ferocious Charge to save it.

With no cards in hand and a flying threat putting a counter on Talon of Pain every turn, Morita's only option was to hope that his deck would provide an answer while there was still time. Meanwhile, Nobushita improved his side a bit more, playing Pyrite Spellbomb and Yotian Soldier. Morita tried to put up some defense in the form of Thermal Navigator and Arcbound Stinger, but Talon of Pain sent them to the graveyard. Ensouled Scimitar gave Morita a more effective answer, but once again the Talon and the Spellbomb meant that a block would cause it to die. Nobushita's Vulshok Sorcerer provided yet another damage source, and Morita conceded. 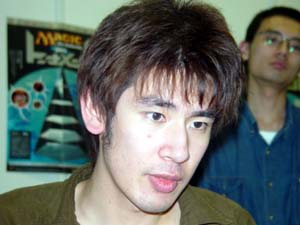