Round 7: Matt Linde vs. Andy Wolf

Andy Wolf was once thought of as an old-timer, but his original return to the game came with a Pro Tour Top 8 at Los Angeles. Now he's 6-0 and on a run for a Top 8 here. In his way is Matt Linde, powerful ex-member of the defunct Huey, Brock and Linde and good friend of the man who might be America's best player, William Jensen. He's playing Brian Kibler's Black-White control, and is looking for an easy matchup against Wolf's red-green. 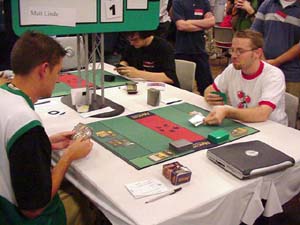 Linde won the roll and opened with a strong set of Grappler, Mongrel, Mongrel, while Linde just cycled an Eternal Dragon. Linde dropped a morph on his third turn, but it Wolf had the Volcanic Hammer to force through more damage.

Linde untapped and threw Wrath of God on the table. Wolf swept his men off the board in silence. He had a heck of a rejoinder at the ready: Blistering Firecat. A nearby Chris Pikula had to turn away and giggle like a schoolgirl. Linde dropped Temple of the False God and a face-up Angel, ending his turn quickly.

Wolf played a Goblin Warchief and sat back. Linde rushed into the Red Zone to get back up to eight life. Wolf tried making another Warchief and swinging in, but a cycled Decree of Justice put two soldiers in front of each. That seemed the death knell as the Angel pulled Linde farther and farther out of reach. There was brief hope when Goblin Grappler inherited Elephant Guide, if Wolf had a burn spell he could kill the Angel. He did not, and scooped. 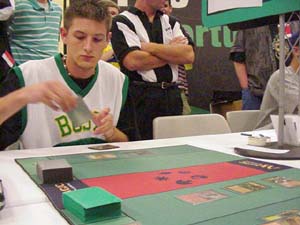 Wolf brought in a pair of Callers of the Claw and three Call of the Herd, subbing out a Siege-Gang Commander, a Sparksmith, Hammer of Bogardan, a Goblin Sledder and one other card. Linde brought in two Wipe Clean, two Ghastly Demise and two Sphere of Law for Decree of Justice, Haunting Echoes, Cabal Therapy and three Skeletal Scrying.

"There's another round after this one? So even if Andy wins we still can't eat? Then win, I guess." – Chris Pikula

Wolf's start was short of spectacular in Game 2, thanks in part to a mulligan, with just a pair of Grapplers serving on the third turn. He still didn't have a forest on his third turn and couldn't cast his hand of green goodies. He made no play on his fourth turn either. Linde Wrathed away his 1/1's. 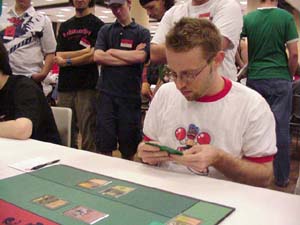 Wolf ripped a Wooded Foothills and got a Mongrel on board. Linde went one better and showed him Temple and Angel. Wolf suited up his Mongrel with a Guide and swung in. Linde took it and fired back. Wolf kept up the pressure with a Blistering Firecat, but Linde had Smother to cut down the Mongrel. He fell to seven, then rose to eleven after cycling a Vengeance. Another Smother got rid of the token. After that came a cycled Decree and then another Angel.

"I think what I need here is an Anarchy." – Andy Wolf

However, rather than cheat and pull one from a nearby binder, he scooped up his cards.