Round 7: Matt Vienneau vs. Richard Hoaen 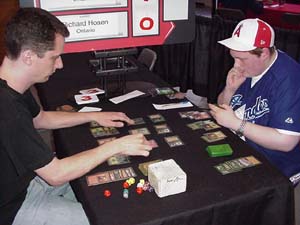 It's old versus new in this round seven Feature Match. Old-timer Matt Vienneau will tell you he's best at Grand Prix in cities that start with "D", but he's come a long way since his golden days. He started the tournament 0-2, but managed to sweep the rest to keep himself in a good position. His opponent is the young Richard Hoaen, who recently Top 8'd Pro Tour Yokohama. His road to 4-2 was significantly more convoluted, and involved some chicanery whereby he dropped, undropped, was left off the pairings, wound up playing four-pointer Adam Whitehead instead of a nine pointer with an insane deck, still managed to lose, and was conceded to since Whitehead couldn't make Top 8. As they say, "How lucky."

The banter started immediately as these two sat down.

"Rich and I did a lot of practice rochesters together." – Matt Vienneau

Just then, Head Judge Marc Hernandez wandered by, and was shocked.

Vienneau kicked off with two forests and an Elvish Warrior, prompting a "How lucky!" from Hoaen. He answered with a Wirewood Savage, and when Vienneau passed without making a play on three lands he got suspicious.

"Go? Did you get a Scattershot?" – Richard Hoaen

Hoaen bashed back for two and played a morph with a green up. Vienneau answered with a possibly devastating Krosan Drover. Hoaen played a Stonewood Invoker, but had no fifth land for Scattershot to get rid of the Drover. He passed it back. Vienneau hit for two and deliberated. He eventually settled on Elven Riders. Hoaen was disappointed that it wasn't a beast.

Hoaen untapped, drew, and stared at his four land.

"I'm gonna have to let you go." – Richard Hoaen

Vienneau swung in with Riders and Warrior. Hoaen double teamed the Warrior with morph and Invoker, and lost his morph, an Unstable Hulk. Vienneau added a Krosan Tusker, giving Hoaen a card, and Hoaen hit the Drover with Scattershot. Hoaen made himself a Charging Slateback to get another card, but was clearly behind. Vienneau smashed with the Tusker, then replaced his Drover and played Fierce Empath, serving up Goblin Dynamo. Hoaen's only play was a weak swing with his Slateback, taken by Vienneau, and then a Glowering Rogon showing two Needleshot Gournas and a Titanic Bulvox.

"It doesn't matter how many counters he has, I'll bet the match you lose next turn." – Matt Vienneau

"Is that legal?" – Richard Hoaen

Vienneau untapped and showed Torrent of Fire, earning the concession from Hoaen.

"This is my year to get revenge on all the people who beat me at past Nationals: Fuller, Hoaen, now if only Terry Tsang could show up. He beat me three times one year." – Matt Vienneau

Hoaen looked at his opening hand.

"I hate Jeff Cunningham so much."

His hand had only two lands, one of which was the Temple of the False God that he'd boarded in on Cunningham's say-so. He shipped it back and got something playable.

Neither player had a play on the third turn, Hoaen cycled Hundroog. He still had no play on four lands, which Vienneau called "suspicious". Vienneau got on the board with Goblin Clearcutter and Elven Riders. Hoaen shut him down with Needleshot Gourna.

"I'm gonna have to take a shower after this one, losing to Matt V." – Richard Hoaen

Vienneau made a morph and held back. Hoaen added another Gourna. Vienneau continued to pound out guys, but couldn't get through Hoaen's huge men. Hoaen brought out Wirewood Guardian, and got ready to go on the offense. Vienneau made a morph and passed it back. Hoaen's Guardian hit, and was blocked by Clearcutter and Vienneau's Gourna. Hoaen killed the Gourna and rescued with Vitality Charm. After combat he made a Wirewood Savage, only to watch Vienneau flip up Skirk Marauder to kill the Guardian and Savage. 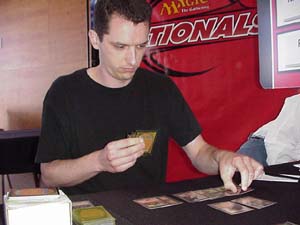 Again Vienneau had to stay home, and this time a Gourna came charging at him after Hoaen laid a Stonewood Invoker.

"Do you have another Charm? Scattershot?" – Matt Vienneau

He doubled up on it with Elven Riders and Goblin Clearcutter.

"I do have Accelerated Mutation," said Hoaen, laying it on the table

"But you hate that card!" – Matt Vienneau

"I do. It's pretty good here, though." – Richard Hoaen

Vienneau was slowing down, and Hoaen had Temple of the False God to turn on his Invoker and hit for seven. Vienneau laid a Timberwatch and put Uncontrolled Infestation on the Temple, hoping to stall Hoaen at six land. He had to chump the incoming Invoker, then brought out Goblin Dynamo to take down a Gourna, but Hoaen had a cavalcade of fatties, and Vienneau's draws had dried up.

Hoaen was first on the board in the deciding game with a Stonewood Invoker. Vienneau answered with a morph and was happy to make the trade. Hoaen replaced his elf with a Wirewood Savage. Vienneau played Goblin Clearcutter. Hoaen played a morph and passed it back.

Vienneau considered his next move carefully, eventually choosing to make a Krosan Drover and sit back on his Clearcutter. Hoaen made another morph. Vienneau untapped and considered his options.

Torrent of Fire dispatched the Wirewood Savage. Hoaen made an Elvish Aberration and gave it back to Vienneau. He in turn made two morphs. Hoaen smiled as he played Contested Cliffs. He swung in with one of his morphs. Vienneau declined to block. Thanks to Elvish Aberration Hoaen could flip up the Bulvox and still have mana left over to Cliffs.

Vienneau's Clearcutter served up Gratuitous Violence, a strong answer to the Cliffs. Hoaen responded by Cliffing away a morph, but unfortunately the morph was Skirk Volcanist, and it traded for the Bulvox and Hoaen's morph, a Skirk Commando. Vienneau was down to three forests. 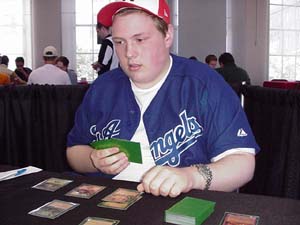 Hoaen swung in with the Aberration to bring Vienneau to nine. He dropped an unamplified Glowering Rogon with one green up. Vienneau made no play. Hoaen conferred with a judge briefly, then returned, shrugged, and turned his men sideways.

Vienneau put his lone morph against the Rogon and took four. Hoaen rescued with Vitality Charm, but Vienneau's morph was Broodhatch Nantuko, serving up four dangerous 1/1's. Hoaen played his last card, a Krosan Drover, and passed it back.

Vienneau made Elven Riders with help from his Clearcutter, then attacked with all his tokens, leaving just two blockers back. Hoaen Cliffed one away and took six. He slid his card up slowly, then flipped it over: Hundroog. With just enough mana to activate his Cliffs, ensuring Vienneau would take lethal damage that turn. Vienneau was unimpressed.