Round 7: Morris Song vs. Nick Wong 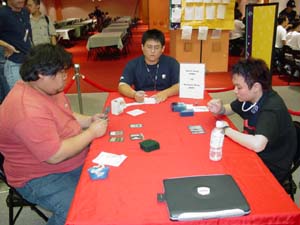 Just two players would leave Day 1 with the coveted 7-0. While Masahiko Morita was contending with Wen-Jien Hwang for that honor, Nick Wong of Singapore was settling in to do battle with Taiwan's Morris Song. The two were a startling contrast. Song cut an imposing figure against Wong's small frame, but Wong's flamboyance outshone Song's reserved exterior. Wong is playing his team's patented Burning Wish Psychatog deck, while Song doing great things with Quiet Speculation.

Song mulliganed his opening draw, but his next six were forgiving. He opened with Wild Mongrel while Wong built his mana-base, and hit for four discarding Rootwalla and Roar of the Wurm. Memory Lapse from Wong kept the pain to a minimum. Still, the hits kept coming, and a Wonder in the 'yard meant that Wong needed removal, and fast.

He drew more land. Fact or Fiction was countered by Circular Logic. Song drew a third land that let him punch harder while keeping Logic mana up. Wong knocked the top of his deck and received only derision in response. Song went for the throat by pitching on his next attack, and Wong scooped. 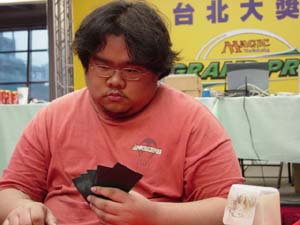 Wong had an excellent draw for the second game, and again Song had to send his back. He got an early Looter, and tried to follow up with Mongrel. Wong was ready with Memory Lapse for the Mongrel and Fire for the Looter. The Mongrel came back and Wong tapped out for Flametongue. Song was ready with Circular Logic.

That turned things around in a hurry. Now Song was free to cast Quiet Speculation, getting two Roars and a Deep Analysis. Wong made a Looter and passed it back. Song flashed back the Analysis, adding Rootwalla to his force. Wong got an emergency Familiar for defence. Song kept the pressure up with Compost and Aquamoeba.

Wong tried his best to appear unconcerned. He went for Flametongue. Song tried to stop it with Circular Logic, running straight into Memory Lapse. The Mongrel fell. The Aquamoeba charged, and pitched a Roowalla to trade with the Kavu. Song still wouldn't touch his Roars, holding back on his Circular Logic. 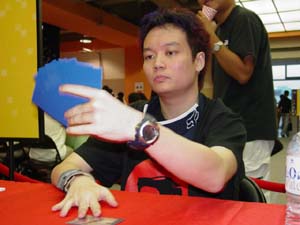 Wong Looted, looking for Long-term answers. A Logic pushed through Engineered Plague on Lizards, dispatching the Rootwallas. At last he had time to breathe. Song went for a Roar, and got Lapsed. He made a Looter of his own and hoped for the best. Fortunately the Compost was keeping him tanked up. Cremate got a Roar and gave him a card.

Wong finally drew into some business, cementing his defences with a pair of Psychatogs. Song's Looter did its job, serving up a pair of Flametongues that left Wong with one Psychatog and no graveyard. And then came the killing blow that Wong hadn't expected: Squirrel Nest. The fact that he turned up the third Flametongue just seemed wrong. Wong dug for his remaining Engineered Plauge, but it was deep in his deck. A second Nest hastened the process, and soon Song stood undefeated on the day.