If there's a team that can beat Phoenix Foundation, it's Zabutan Nemonaut. Gary Wise and Mike Turian won this Pro Tour back in 2000, and this time around have top American player Eugene Harvey on the team instead of Scott Johns. Throw into the equation the fact that all three are teammates 365 days out of the year as members of CMU-TOGIT, and you have a squad that is fully capable of taking down the seemingly undefeatable Germans. In the first round of draft, they're up against Jeff Cunningham and Brett Shears, who have picked up European Pro Tour veteran Tomi Walamies to round out their team.

Cunningham opened with a morph and a Stonewood Invoker, and Turian summoned Timberwatch Elf. When Cunningham played Wirewood Herald, Turian blocked it and kept it alive after damage went on the stack with his Timberwatch, so that Cunningham couldn't search up an Elf. Creatures continued to accumulate on the ground, and Turian played a Shoreline Ranger. On Turian's end step Cunningham unmorphed Treespring Lorian, untapped, and attacked with his whole team. A morph turned out to be Titanic Bulvox, and Turian's 3/4 flier headed to the graveyard. Turian had yet another Ranger, and seemed ready to stabilize, but Cunningham used Enrage on his unblocked creature to bring Turian to 1 life point--Claws of Wirewood finished it.

Walamies 2-for-1'ed Wise with a turn 4 Infest. The board rebuilt from there, and was even until Walamies unmorphed Aphetto Exterminator to kill Aven Redeemer. The following combat saw creatures trade 1-for-1, which put Walamies ahead since he was up two cards from his efficient removal spells. Wise stayed in the game thanks to Reaping the Graves, but fell to Walamies's bigger-than-morph creatures, including Thundercloud Elemental and Mistform Ultimus.

Harvey seemed to be in a great position thanks to Extra Arms on Spectral Sliver, but Shears unmorphed Daru Sanctifier to handle the problem. Shears's Crowd Favorites came out to answer Harvey's Chartooth Cougar, but Harvey came right back with Visara the Dreadful. Twisted Abomination put even more pressure on the board, and the game was over soon after.

In game 2, Cunningham and Turian played first turn Taunting Elves. Cunningham's draw was explosive, with Stonewood Invoker, Timberwatch Elf, and a pair of Elvish Warriors that all came out very quickly. Turian tried to slow things down by unmorphing Willbender to change a Timberwatch pump and Temporal Fissuring the Timberwatch, but Cunningham draw was simply too fast and Enrage dealt lethal damage to put Mount Cleverest up a match. 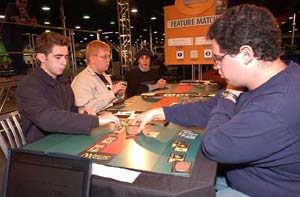 Wise was down a game, and had to win the next two to keep his team in the match. He played a second turn Skinthinner, followed by a third turn Dragon Shadow to put a quick clock on Walamies. The evasion-Skinthinner plan seemed like it would be stopped by Vengeful Dead, but Wise made his creature even bigger with Clutch of Undeath. Walamies still had an answer, playing a Toxin Sliver that blocked and traded with the big Skinthinner. Wise wasn't out of resources, though, summoning Prowling Pangolin. Walamies kept responding with the right answer, playing Deathmark Prelate. Vengeful Dead was sacrificed to kill the 6/5 Beast, and Wise was out of threats while Walamies had plenty in his hand.

His creatures kept coming as Wise seemed done, until he played Akroma. This threat was no different, as Walamies had the right answer: Ixidor's Will. This got a laugh out of the crowd, as Wise conceded to give Mount Cleverest the win. Shears immediately conceded his match with Harvey, where he had a poor mana draw and most likely would not have won.