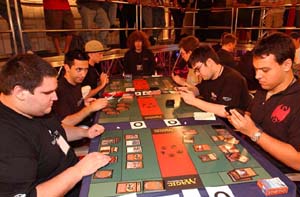 My Team Part 17 vs. Metagames

These two teams were sitting comfortably at 6-0. While a loss wasn't desired, the threat of it was minimized by their being guaranteed a place in Day 2. As a result, the tone of the match was relaxed but sensible, like tan cotton slacks. Metagames is composed of some of the best French players, and My Team Part 17 is the unholy alliance of Alex Shvartsman, Zvi Mowshowitz and Justin Gary.

Ranque had the early advantage against Gary. He played out Putrid Warrior, Viashino Grappler and Mire Kavu, while Gary answered all but the last with removal, always a step behind. Gary put a stop to that nonsense with a kicked Pouncing Kavu on defense.

Zvi Mowshowitz got exactly what he needed against Raphael Levy's horde of Gray Ogres: Two Horned Kavu and a Thornscape Apprentice to force them through. Levy was at four and chumping before you could say "Jack Robinson".

Alex Shvartsman mulliganed in his first game against Franck Canu. His Stormscape Apprentice and Crimson Acolyte were answered by Canu's Samite Archer, threatening to demolish his board. Shvartsman played Worldly Counsel and found Breath of Darigaaz, which he kicked with enough mana to protect his Apprentice and force Canu's hand.

Gary was content to build up forces behind his first-striker. He made a Zombie Boa that started to eat at Ranque's life total. Ranque held fast, and played out a heft board of creatures. Eventually he found a Soul Burn to take out the Pouncing Kavu, and ran all his guys into the Red Zone. Gary traded eagerly, and the dust settled on Gary's Slingshot Goblin versus Ranque's Enlistment Officer.

Mowshowitz doubled up again in game two, this time on Serpentine Kavus. However, he didn't have excess mana to haste them, and so was behind thanks to Levy's Duskwalker. When both 4/4's swung on the following turn, Levy was ready with the brutal combination of Bloodstock, Tidal Visionary and Repulse. He took no damage and brought down one of the Kavus. 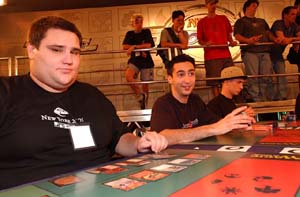 Shvartsman's draw did him no favors. Canu had picked up Jungle Barrier, Aurora Griffin and Nomadic Elf, as well as a Confound for Shvartsman's Jilt. Angel of Mercy joined Canu's party. Shvartsman made a half-hearted Goblin Trenches, but wasn't able to come back from five a turn.

Gary had also found a speedy recovery, thanks to Phyrexian Gargantua. Two Hill Giants later, he had taken the first game from Ranque. Mowshowitz was unable to repeat his first-game performance. Levy stopped a desperate all-out attack with ease, and Mowshowitz scooped.

Shvartsman's second game against Canu did not start his way. Canu had an Exclude for his Armored Guardian, and six power of creatures on the table. Shvartsman dug for an answer with Probe, his board of just Stormscape Apprentice looking lackluster. He made a Razorfoot Griffin. Canu bought a turn of beats with Temporal Spring, and then another with Rushing River.

Levy had meanwhile started off game three with Sparring Golem and Sleeper's Robe. He added a kicked Duskwalker, and when Mowshowitz tapped out for Kavu Chameleon, Levy answered with Dead Ringers, taking out an Alpha Kavu just for fun. He even matched him Stormscape Master for Thunderscape Master. Facing the lethal drain, Mowshowitz asked Levy to let him live just a little longer. Levy denied the request, giving Metagames the first match.

Ranque-Gary game two was a replay of game one, with Ranque busting out creatures only to be stopped by Gary's kicked Pouncing Kavu. This time, however, Ranque had Soul Burn to remove the blocker right away, putting Gary on a serious clock. Gary's removal could not keep up with Ranque's creatures, and they were on to game three.

Incredibly, Shvartsman's game was still underway. He had pulled a second Razorfoot Griffin, as well as a Coalition Honor Guard to run defense. Canu stopped his Goblin Trenches with Aura Blast, but not before Shvartsman made six tokens. That provided him enough chump blockers to let his Griffins sail to victory.

The familiar Gary-Ranque scenario played out a third time, with Mourning smoothing the way for Ranque's creatures. A Plague Spores that took Ranque's only mountain made sure a 1/3 Pouncing Kavu would be able to handle Ranque's Angelfire Crusader. Eventually Ranque found another mountain and smashed through, but Gary had Urborg Uprising to get a chump blocker and an Attendant to take care of the Crusader permanently. 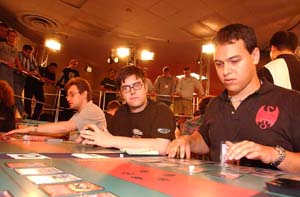 Shvartsman had a quick start in the third game of his match against Canu. He made Sapphire Leech and Disciple of Kangee, then invested further in bombers with Silver Drake. Canu held only ground forces. He delayed as long as possible, falling to eight before tapping out for an instant-speed Rout. Shvartsman rescued his Drake and Honor Guard with Rushing River.

Gary had continued to topdeck like a fiend, peeling Soul Burn to off the Crusader and put him to five life a turn before Ranque would draw his Obsidian Acolyte. He also apparently cursed Ranque, whose draws were land, land and land. This gave Gary ample time to draw into creatures, who marched over Ranque to victory.

Canu needed a big follow up to his life-preserving Rout. He found Kavu Climber and Serpentine Kavu, but Shvartsman was ahead in the race and swinging with Silver Drake. Shvartsman ended it with a kicked Breath of Darigaaz.