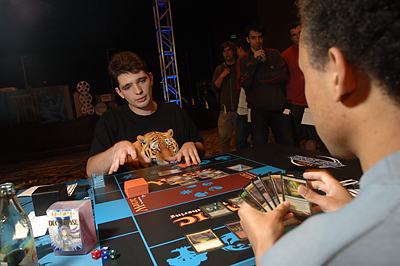 Brazilian Paulo Vitor Damo da Rosa is ready to spring.Here in Round 7, I found myself in a spot in which I try to put myself as frequently as possible: in a prime spot to watch Guillaume Wafo-Tapo play Magic: The Gathering. Right now, Wafo-Tapo is one of the top players on the planet. Watching him play is reminiscent of watching Kai or Finkel play back in the day (or even at the last PT, in Finkel’s case). He’s always calm, always deliberate, and best, almost never wrong. He plays the game on his own level.

Paulo Vitor Damo da Rosa is a force to be reckoned with in his own right. He has two Pro Tour and three Grand Prix Top 8s on his resume, but has yet to notch himself a win. This crafty Brazilian is never far from the top of the standings at any event, and is always a threat to take home the title.

To give you an idea of how much people enjoy watching these players play, at one point, I looked up before the match started and saw a crowd of spectators around the barrier, as well as every member of the Wizards staff who wasn’t doing something else watching from the inside. Everyone wanted to see these two masters do their thing.

Damo da Rosa was forced to mulligan his first had, but kept his next six. I’ve heard it said this weekend that Faeries can’t lose if they resolve an Ancestral Visions. If that’s true, than this was going to have to be a fast game for Wafo-Tapa. Damo da Rosa suspended the powerful sorcery on the first turn, and then just sat back and built his mana over the next couple of turns. Wafo-Tapa did some building of his own. His mana base was described to me earlier as “the greediest thing I’ve ever seen” by a player who shall remain nameless. By the fourth turn, he had a Fungal Reaches, a Vivid Grove, a Reflecting Pool, a Mystic Gate, and a Wall of Roots. I’m not sure what he was building, but it had more colors in it than a Crayola box.

Using this array of nonbasic lands, Wafo-Tapa found himself a Kitchen Finks, which would start taking down da Rosa’s life total in three point chunks. At the end of Wafo-Tapa’s turn, Damo da Rosa played a Vendilion Clique, which revealed a hand with a lot of land, and not much else. Damo da Rosa continued to use his opponent’s end step to play his spells. At the end of Wafo-Tapa’s fourth turn, a Scion of Oona came down to boost Damo da Rosa’s damage output.

Damo da Rosa finally played a spell during his own turn when his Ancestral Visions unsuspended and refilled his hand. After admiring his newly drawn cards, Damo da Rosa activated his Mutavault and sent his whole team in. After that thorough beating, Wafo-Tapa was left on 10 life. On his turn, he decided to take himself down to 8. The Cloudthresher he played also had the side effect of wiping all of Damo da Rosa’s faeries out of the sky. That, and I’m pretty sure he’s on the winning side of the Mutavault vs. Cloudthresher bout.

Damo da Rosa kept to his game plan, merely drawing a card, playing a land, and passing the turn. After Wafo-Tapa had drawn a card, Damo da Rosa played a Vendilion Clique to try and strip some goods out of Wafo-Tapa’s hand. A Makeshift Mannequin went to the bottom, and it wasn’t replaced with anything of any real value. Wafo-Tapa just attacked with his Kitchen Finks and Cloudthresher, the latter of which got Terrored. Da Rosa was running low on gasoline, and didn’t have the cash to fill up his tank. Luckily for him, his following swing brought Wafo-Tapa down to a precarious 3. Wafo-Tapa calmly (like there’s any other way for him) drew his card, tapped six mana, and played Oona, Queen of the Fae. A Rune Snag was easily paid for, leaving Wafo-Tapa with three untapped lands and a firmer grip on the game. 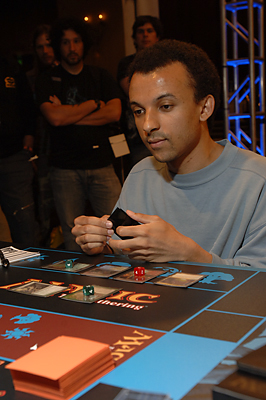 Frenchman Guillaume Wafo-Tapa is piloting an unusual deck, to say the least. When Damo da Rosa sent his Faerie Conclave and Vendilion Clique in on the following turn, Wafo-Tapa activated his Oona for two naming blue. Since it’s apparent by now that Wafo-Tapa can do no wrong, I shouldn’t need to tell you that he hit two cards, removing Rune Snag and a Mistbind Clique from the game. Oona then jumped in front of the Faerie Conclave, and one of his tokens jumped in front of the Clique. A Scion of Oona kept the Clique alive, but there was no such help for the Conclave. When the Queen of the Fae wants a Faerie dead, they die. Wafo-Tapa retaliated by sending his Kitchen Finks and his remaining token in to knock Damo da Rosa down to 5.

Damo da Rosa managed to get a Mistbind Clique into play the following turn, which forced Wafo-Tapa to activate his Oona in response. Three of the six cards revealed turned out to be blue, and his army’s size doubled. At this point, Damo da Rosa was drawing to a Cryptic Command that had to resolve to force his Faeries through for the last points. The Mistbind Clique took the Finks out for the first time on Wafo-Tapa’s turn, which brought him back up to 5.

The next turn gave a brief taste of the sickness that Wafo-Tapa’s deck was capable of. First, he sent his entire brigade of four Faerie Rogue tokens, Oona, and the little Finks over to try and finish da Rosa. Vendilion Clique stood in Oona’s way for a second, the Scion of Oona ate a token thanks to a Pendelhaven, and a Terror took the Finks out for good. That dropped da Rosa down to two. A Makeshift Mannequin on a Cloudthresher finished the game off with panache.

This time, it was Wafo-Tapa’s time to mulligan, matching Damo da Rosa’s from the first game. Damo da Rosa started off aggressively. Instead of trying to fake a Rune Snag, he just sent his Mutavault over for a couple points of damage. That wasn’t going to happen again, at least not with Wafo-Tapa’s Wall of Roots getting in the way. With the ground now clogged up, Damo da Rosa went back to his “only play things on my opponent’s turn” strategy. At the end of Guillaume’s next turn, Paulo tried a Vendilion Clique, which got Rune Snagged.

After that, things got kind of quiet. Both players just drew their cards and played lands and Walls of Roots until Damo da Rosa suspended an Ancestral Visions on turn seven. After that, things got interesting. During Wafo-Tapa’s next end step, Damo da Rosa tried to play a Spellstutter Sprite. That, combined with his Pendelhaven, would provide enough pressure that Wafo-Tapa would have to use a much better (and probably more expensive) spell to avoid dying. Sure enough, after the Sprite came into play, Wafo-Tapa emptied his storage lands to play a Cloudthresher, killing the Sprite. Finally, Damo da Rosa had a Terror for the tentacled nightmare before untapping.

During Wafo-Tapa’s next upkeep, Damo da Rosa tried a Mistbind Clique, which was Dismissed by a Cryptic Command. On the following turn, Damo da Rosa’s Ancestral Vision went down to its last counter, and he set another one up to come off four turns later. When the first Vision did come off on the next turn, it too was Dismissed by Cryptic Command. Damo da Rosa just shrugged and dropped a Bitterblossom. Wafo-Tapa drew his card and asked Damo da Rosa how many cards he had. Wafo-Tapa had four himself, and Damo da Rosa had a mere two, but he had a Bitterblossom in play now, and a ton of life to spare for it. Wafo-Tapa thought for a bit before deciding to evoke a Wispmare in an attempt to kill the enchantment. Damo da Rosa responded by activating his Mutavault and trying to Spellstutter Sprite Wafo-Tapa’s little pony. In response to that, Wafo-Tapa dug a little further into his deck with a Careful Consideration and found himself a Slaughter Pact to kill the Mutavault. Consequently, the Sprite hit play and couldn’t counter the Wispmare, which destroyed the Bitterblossom. Things never got this complicated with Fifth Edition rules... 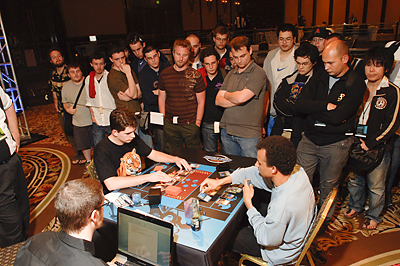 This ‘masters edition’ feature match draws a crowd.The Sprite may not have stopped the Wispmare, but it still got its beat on. Pendelhaven gave it an extra boost and dropped Wafo-Tapa to 14. And then there was Oona. How is a Faerie deck supposed to win if their Queen is batting for the other team? All Damo da Rosa could do was draw and pass his turn, which lead to the first of many Oona activations by Wafo-Tapa. Four cards later, he had himself a shiny new Faerie Rogue token. On top of that, Oona smashed in on the next turn to drop Damo da Rosa to 13. Yes, that’s right, Oona has a game-winning ability and has a 5/5 flying body to boot. Seriously, I’d vote for her.

The Ancestral Vision that da Rosa had set up four turns ago finally came off and filled up his hand. In his new cards, he found another Bitterblossom, as well as a Faerie Conclave. What he didn’t find was a way to stop Oona from absolutely faeriehandling him. Guillaume used Oona on Paulo’s end step for ten, which got him a healthy five Faerie Rogues. After untapping, Wafo-Tapa sent his air force over the red zone and into Damo da Rosa’s air space. Da Rosa played a second Spellstutter Sprite, chump-blocked Oona, and ate a token with his Pendelhavened Spellstutter Sprite. Now at 8 and facing a flying armada, Damo da Rosa found his Bitterblossom more of a liability than a boon. He decided to play a main-phase Vendillion Clique targeting himself to try and find some sort of answer. I’m not sure what he was looking for, but when he failed to find it, he shook Wafo-Tapa’s hand in defeat.