Round 7: Noah Boeken vs. Katsuhiro Mori 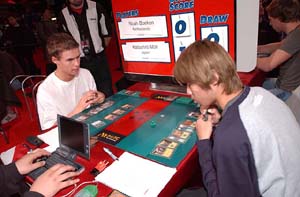 The loudmouth Noah Boeken against a legend from the east. Katsuhiro Mori is Japan´s answer to Wild West cowboys: anyone who ever watched him play says he is way too fast for words. Boeken is no slouch either and his skill and results are the reason he is playing in his fourth Feature Match today.

This is the money round. The winner gets to play tomorrow while the loser can only hang around complaining about his bad luck.

True to his fame Mori came out with Chatter of Squirrels and Flashback before I could even write this sentence. Boeken slammed down Chainer´s Edict and Phantom Whelp in an attempt to slow him down.

Katsuhiro reached four mana and dropped Possessed Centaur followed by Metamorphic Wurm on the next turn. Meanwhile Boeken was trying to fight back through the air with Aven Fisher while dropping smaller creatures to clog up the ground.

He did his best to stop Mori´s monsters but with Seton´s Desire now pumping the remaining squirrel things were looking very grim for the Dutch. A timely Aether Burst turned a gang block into a disaster. In a few turns the Dutch was out of creatures and the game was over. 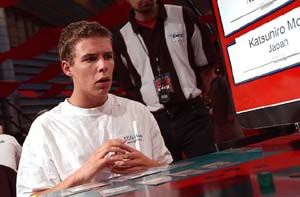 It was that fast. The round had only started four minutes ago and they were already reaching for the sideboards.

The first game was so fast and furious Boeken took of his sweater before sideboarding. They silently shuffled getting set for the second game. This time things started of much slower with Boeken´s first creature getting Aether Burst and Mori playing Deep Analysis before dropping Cephalid Aristocrat.

The Aristocrat got ganged by Skywing Aven and Dirty Wererat and a turn later the Wererat was surprised by a Beast Attack. The token got removed by a Patriarch´s Desire after combat leaving the Wererat alone once again.

Flooded in lands Katsuhiro flashbacked Analysis before playing Squirrel´s Nest and Chatter of Squirrels. Boeken couldn´t sneak through on the ground so he played a Gravedigger preparing for the long battle. 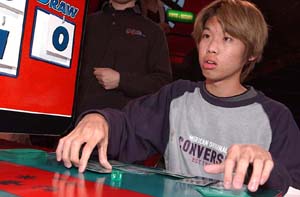 The hyperactive Japanese watched as Noah Boeken dropped creature after creature taking to the skies with Skywing Aven and hoping to hold back the incoming flood of tokens.

Ghostly Wings helped Gravedigger joined the flying circus but Mori had a Moment´s Peace to slow things down. On the ground his squirrels now had a massive commander: Metamorphic Wurm with Seton´s Desire.

It was too much for Boeken to handle. He struggle to balance things out but the Japanese would not back of. On and on the huge Wum and its trailing groupies charged on mowing through any attempt of resistance Noah Boeken tried to mount.

1 Chatter of the Squirrel 2 Deep Analysis

1 Dawn of the Dead 1 Haunting Echoes