Round 7: Noah Boeken vs. Tomi Walamies 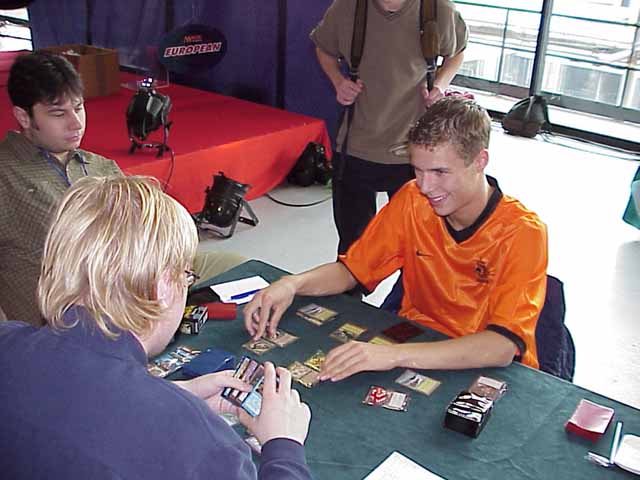 Noah is working with Stompy, while Tomi is playing Accelerated blue. This is traditionally a very tough match up for blue, but after boarding it can give Stompy a beating.

Noah had a great start making a first turn Jaguar, second turn having his Rancor annulled, with an Orangutan, Cradle and Troll in Hand. Tomi makes a turn 2 Keg, but the Orangutan dropped blowing it up. Tomi did nothing on turn 3, but sat with 3 blue open. Noah tried to make an albino troll, drawing the counterspell, then, using the cradle, made the other troll he had just topdecked. He attacked with the boys leaving Tomi on 12 life, laid a Treetop Village and said go. Tomi laid a Port to deal with the village, but couldn't muster anything else. Noah attacked the next turn, leaving Tomi on 5 life. Tomi drew his card, looked at it and conceded.

Tomi mulliganed to 6, but kept a hand with 3 islands, 2 submerge and a Somnophore. He drew and made powder keg on turn 2, blowing it to kill Noah's early jaguar, and countering the Third turn Tangle Wire. Noah made a Troll which was Submerged in his next upkeep, meanwhile Tomi is screwed on 3 land missing both his fourth and fifth turn land drops, and was forced to submerge the troll again, still stuck on 3 land at the end of turn 6. Noah remade the Troll, well aware that Tomi was screwed. Tomi top decked the Grim and laid the Masticore he had drawn two turns earlier, but Noah nukes it with the Orangutan he had held for 2 Turns. He began the beat down and looked strong. Tomi still hadn't drawn a fourth land and was sat with 2 Somnophore in hand. Noah made a tangle wire, to which Tomi could only say 'Sure' and continued beating. Tomi drew and laid the fourth island but by then it was too late, as the Tangle wire allowed Noah to serve for Lethal damage over the next two turns.