Round 7: Nobuaki Shikata vs. Satoshi Nakamura 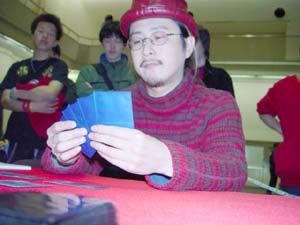 Bookish and earnest, Nobuaki Shikata was quite a contrast to the worldly and relaxed Satoshi "Hatman" Nakamura. Nakamura is one of Japan's graybeards, a player who's been pro from the very beginning. Recently he's been too busy designing games to play them, but he's been known to show up at Grand Prix when they're convenient. Shikata is new blood, but he's already got himself a pair of GP Top 8's.

The good news was that Nakamura didn't draw a land, and the Plower had stranded both Erratic Explosion and Shock. Airdrop Condor from Shikata took care of the Dive Bomber, and again Nakamura had no play. Unfortunately, all Shikata could manage was a twice-amplified Glowering Rogon. Nakamura hit for two and played Aven Redeemer. Shikata had no burn, and they were on to Game 2.

Nakamura kept a two-lander playing first in Game 2, but drew out of it. Shikata was ready with a strong start of Gempalm Strider and morph, but Nakamura met it with Mistform Dreamer and morph, trading the latter for the Strider. Daunting Defender showed up just in time to shut down Ridgetop Raptor. Shikata added Sparksmith to his team. Nakamura made another morph and continued to serve in the air.

Shikata hit his fifth land and upended things with Crested Craghorn. He took down the Defender and dealt six, then shot down the Dreamer. Nakamura made no play. The Raptor and morph attacked again, and Weaver of Lies was ready to take down the morph. Still, Nakamura was taking a lot of damage. He made a morph and passed it back. The Weaver traded with the Raptor, and Shikata showed a Symbiotic Beast. Nakamura unmorphed his Ascending Aven, but drew a blank, and Shikata had Macetail Hystrodon waiting to finish him off.

Nakamura had all his colors on the table by turn three, but had drawn only four casting-cost fliers and Shock. He held back on his burn when Shikata played a morph, instead untapping and playing Keeneye Aven. Shikata kept his morph at home. Nakamura hit and added Aven Redeemer. 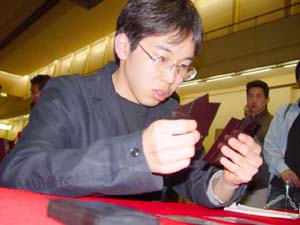 He dropped Daunting Defender and got in one more hit, but the Spider had him completely stymied. Shikata spent his next turn clearing the skies. Nakamura bounced back with a pair of morphs, but Shikata had Sparksmith and Ridgetop Raptor. Nakamura thought hard, then held back.

Shikata swung in with just his morph and Nakamura blocked with all his men. Shikata turned over Charging Slateback ("The Heiss!"). Nakamura went one better with Weaver of Lies. He'd need more than that, though. Shikata had Frenetic Raptor at the ready, and Nakamura could only muster Glory Seeker. The Raptor hit for six and Shikata played a face-down.

Nakamura swung with Defender and Weaver of Lies. The face-down took the Weaver, and Shikata let the Defender through. He unmorphed Nantuko Vigilante and got ready to fire his Sparksmith. Nakamura dropped Mistform Dreamer. Shikata shot the Weaver. Nakamura had Shock ready, but that just meant Shikata had to spend a Shock of his own. He sent the Raptor again, and naturally Nakamura chumped with the Dreamer. Shikata needed his mana to drop Symbiotic Beast.

Now Nakamura was out of options. He played a face-down Daru Santifier that caught the Ridgetop Raptor off-guard, but he still had no answer to the 6/6. Aven Fateshaper showed him nothing of interest. Shikata cleared it out with the Spider and swung in. Another turn and it was over.