Round 7 found these two undefeated players from Denmark (which is “not close to Germany”) and Australia (ditto) fighting for pole position in Day 2.

Jeremy rolled an eight on two six-siders, but Enevoldsen’s roll was merely average at seven.

Neeman kept his seven, while Enevoldsen sent his back to Paris, which might also not be close to Germany. The next six were playable and they were off. 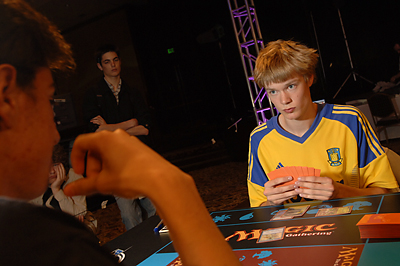 Thomas Enevoldsen and his opponent both start the round undefeated.A Plains for Neeman was matched by an Island for Enevoldsen. An Island allowed Neeman to suspend Riftwing Cloudskate. Not to be outdone, Enevoldsen had a River of Tears, allowing him to land a Bitterblossom.

Neeman’s Cloudskate ticked down as he played a Calciform Pools and a Mind Stone. Bitterblossom put a Faerie Rogue into play at the cost of 1 life before Enevoldsen played Pendelhaven. Neeman used the Mind Stone to put a charge counter on his pools during Enevoldsen’s end step.

The Riftwing Cloudskate lost another counter, and Neeman laid an Adarkar Wastes to play Reveillark. Enevoldsen played a Spellstutter Sprite on end step, untapping and putting another token into play, moving to 18 life. His draw step revealed no fourth land, so he passed the turn.

On turn five, Neeman’s Riftwing Cloudskate was ready for battle, coming in to bounce Bitterblossom. A second Adarkar Wastes gave Neeman pause. After some thought, he sent his Cloudskate into the red zone. It was Enevoldsen’s turn to think before intercepting the incoming illusion with Spellstutter Sprite. Pendelhaven took the Cloudskate down with no losses on Enevoldsen’s side, but a post-combat Reveillark looked menacing.

Enevoldsen’ turn was again underwhelming, as he didn’t have a land to replay Bitterblossom, giving Neeman free reign to crack his Mind Stone, play Mystic Gate, and send his Reveillarks rumbling in. Spellstutter Sprite and two tokens blocked one of the big fliers, and Pendelhaven again saved the Sprite. Reveillark’s death was avenged by the return of the Riftwing Cloudskate, sending Pendelhaven back to Enevoldsen’ hand to assure he would essentially miss another land drop.

On Neeman’s end step, Enevoldsen ran out another Spellstutter Sprite. The Pendelhaven came back into play, letting River of Tears tap for black. Bitterblossom landed, and Neeman put a second counter on his Calciform Pools.

Neeman’s turn was big, as he cashed in both of his charge counters and tapped out for a pair of Sower of Temptations, stealing both Spellstutter Sprites. Reveillark and Cloudskate took advantage of the opponent’s exposed noggin, smashing in for 6 damage.

A token came into play for Enevoldsen, putting him to 7. Secluded Glen, while late to the party, gave Enevoldsen some hope for kicking out of the situation he was in as he used a Terror on Reveillark.

Venser, Shaper Savant decided to show his face, bouncing the token and again clearing the path to Enevoldsen’s dome. During combat, before attackers were declared, a second Terror on Sower gave Enevoldsen back a sprite, but the rest of the team was unimpressed. Cloudskate, Spellstutter Sprite and Sower all wanted a piece, and Enevoldsen decided not to block, going to 2 life.

Bitterblossom put Enevoldsen on 1 during his upkeep. The draw step revealed an Island, which came into play before the turn was passed.

Cryptic Command tapped all of Neeman’s creatures and bounced his Sprite, but Enevoldsen grinned sheepishly as he remembered the lethal upkeep on Bitterblossom.

Enevoldsen sided in one Thoughtseize, while Neeman fine tuned his deck, substituting out a Momentary Blink and pairs of Body Double, Wrath of God, and Aven Riftwatcher for some protection via Pact of Negation and answers to Bitterblossom in the forms of Crovax, Ascendant Hero and Wispmare. Teferi also came in to hopefully handicap the opposition.

Enevoldsen led off with Mutavault, while Neeman had and Island. River of Tears enabled Mutavault to get in for some crucial early damage. Neeman could only manage a Plains for his turn.

A second Mutavault entered play for Enevoldsen, allowing him to play his Thoughtseize off of River of Tears. It revealed this little number: Rune Snag, Rune Snag, Momentary Blink, Venser, Reflecting Pool, Reveillark, and Sower of Temptation. Enevoldsen took out Venser in hopes of stealing the game with his man-lands. Mutavault put Neeman on 16, while Enevoldsen was ahead on 18.

Neeman just had the already-known Reflecting Pool and passed the turn back with a shake of his head. River of Tears and a fresh Island activated both Mutavaults, which bashed Neeman down to 12.

Neeman’s turn revealed no land and no solutions to the angry shapeshifting lands on the other side of the table. 4 more damage put Neeman to 8 before Faerie Conclave joined Enevoldsen’s mana-pool party.

Neeman drew another blank and discarded Rune Snag, taking 4 more before he packed it in, never drawing a fourth land. Enevoldsen was visibly giddy about stealing the game with essentially no spells.

Both players kept their openers for the deciding game.

Neeman started with Plains, and Enevoldsen kept pace with an Island. Neeman played his own Island for his turn, while River of Tears snuck a Bitterblossom into play, drawing a smirk from Enevoldsen. 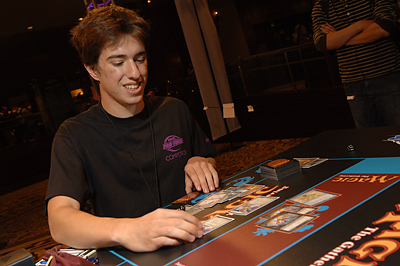 Jeremy Neeman is a man with no lands.Neeman wasn’t about to have another game stolen, so he played a second Island and a Wispmare, destroying the Bitterblossom. Enevoldsen played Underground River and Thoughtseize via River of Tears, finding Pact of Negation, Reveillark, Momentary Blink, Careful Consideration, and Rune Snag, initiating a short exchange.

Careful Consideration was seized and it was Wispmare’s turn to attack. Neeman had no fourth land, so he said go. An Underground River enabled another Bitterblossom, which resolved with two lands up.

Neeman drew his card for the turn, covered his face with his hands, and attacked his opponent down to 16. Still no land was forthcoming, and the action was back to Enevoldsen.

Bitterblossom produced a token before a third Underground River entered play. A second Bitterblossom resolved, concluding Enevoldsen’s turn. Neeman went back to the top of his deck, attacked with Wispmare to take his opponent to 14. With a grimace, Neeman tried to Momentary Blink his Elemental. It was allowed, but Scion of Oona protected the tribal enchantment.

Two tokens took Enevoldsen to 12 life. A fourth Underground River and a Terror cleared the Wispmare out, allowing Enevoldsen to attack with a token and Scion of Oona.

Neeman missed yet another land drop, putting him too far behind to catch up to the mounting Faerie army.